In America, it costs almost $58900(INR.40lakhs) mainly because of its hydrogen-powered engine. If they launch this hydrogen engine here in India, its sure that it'll fail in sales as even electric cars aren't being sold in India let alone would Hydrogen cars. The way they could sell it to the Indian customers is by giving a petrol engine itself instead of the hydrogen. 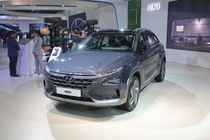 HomeNew CarsHyundaiNexoHyundai Nexo ReviewsWould Be Expensive!
Alert Me When Launched