Looks Downgraded Instead Of Face-lift

Looks Downgraded Instead Of Face-lift

I don't know why instead of improving the looks, it has been severely downgraded. The front grill looks the same as VENUE, which is the worst-looking car in its segment. They have wasted an opportunity to rule Indian roads. The look of the previous Hyundai Creta was one of the best in its segment, especially its front Grill. Face-lift doesn't necessarily mean changing all the features especially the good ones. 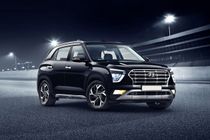