Well, Figo facelift has been a good car since its debut in 2015 but now it's more perfect by giving more features and better looks!!!! The floating touch screen looks brilliant and even has 1st in segment features like 6 airbags. It has the best petrol and diesel engines with more power than its rivals and even gets the new 1.5 petrol which can go from 0-100 in under 10 seconds which can be better. Even for so many changes, Ford doesn't charge us a premium and it best in its class!!

4.6/5
Based on317 User reviews
Write Your Review
Figo Reviews 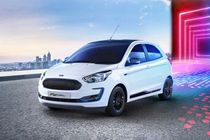