Today i am going to review hatchback launched by Datsun to mark brand's re-entry after so many years i.e."DATSUN GO" launched in March 2014.I bought my brand new datsun go in July,2014.I was earlier in dilemma about my car purchase since my budget was low & cars offered in my budget were lacking in terms of space,power ,engine capacity etc.After researching i came across datsun's latest entrant 'GO HATCHBACK'.Being an engineer i reviewed the specifications of the car which usually our indians don't, since they go with what their mamas & chachas suggest i.e. Maruti suzuki etc.I had earlier made my mind to buy a second hand swift for myself but my wait was worth for my "GO".Datsun Go is a car which is powered by 1.2 litres VTVT engine with power of 68bhp & torque figure of 110Nm.Being a light weight car it offers excellent pickup & power to weight ratio is also better than some of higher segment hatchbacks.As far as space is concerned it offers excellent cabin space with 5 seated comfortably.I took my datsun go for an royal enfield event in goa along with my 15 biker friends,their complete baggage was kept in my car's boot which offers 265 liters of storage.Also i achieved fuel efficiency figures of 23.4Kmpl with 5 seated on mumbai pune expressway which is greater than mentioned by Datsun which is 20.6kmpl.GO has a excellent ground clearance of 165 mm which i realized when i drove my car to Tent house in panchgani through a hilly route.the only problem i feel about my GO is tyres offered by Datsun which are too small which kets you down a bit while hard cornering.but looking at features & specs offered at the price i can say "Itne paise mein itnahich milega".I took my datsun Go at a top speed of 147km/hr on expressway & i was very confident while driving at such speeds.it offers a effortless drive.Priced at 4.60 lakhs on road thane in 2014 for top end variant 'T' ,it was one of the best configured hatchback available in indian market.Also the after sales support is very good ,they often organise camps checkup camps which ensures car's condition on timely basis as well as cost of spares & repair is cheaper than other indian companies. Verdict:If you are looking for a small car with Specification of an higher segment car & space for family of 5 then dont wait, just go to grab your own "Datsun GO". 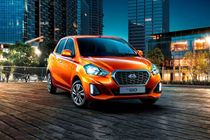 I can see only Manual version of Datsun Go. Do they have Automatic gear version?