The BMW X3 has been known for traditionally lagging behind its German rivals. But the new generation model is set to change the game altogether. I happened to saw the latest model at the Auto Expo recently and I was stunned to see the amount of modification the company has done to this SUV. If you take a quick walk around, you will realize it has a striking resemblance to elder sibling X5. At the front fascia, the car gets bigger and taller kidney-shaped grille and the double-barreled headlights with neatly placed LED inserts. The car has been built on an all-new platform of the company known as CLAR (Cluster Architecture) which also underpins the 5-series sedan. At sides, the car looks similar to the outgoing model but have a distinctive appeal with the large squared wheel arches and 18-inch wheels. The rear comprises of 3D LED taillights, integrated roof spoiler, and the twin exhaust pipes, all screaming X5 design elements. Sitting inside is now a sheer delight with the car getting a lot of new techs similar to the 5-series. The key highlight is the iDrive infotainment system which can be controlled via voice, gesture besides conventional touch capability. The new X3 also get 12.3-inch instrument cluster with HUD projecting everything on to the windshield along with ambient lighting system and three-zone climate control and large panoramic sunroof to lift and the comfort and ambiance inside. The car is now more spacious from inside; thanks to the longer wheelbase that provides more legroom for both front and rear passengers. While it has been hard for this vehicle to crack the segment so far, but I would certainly say that before buying an SUV in this class where Audi Q5 and Mercedes Benz GLC are already ruling the roost, just wait for a few months, test drive new X3 and then finalize. You will definitely notice an upswing. 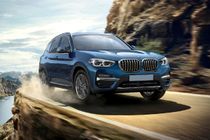