Good To Drive, Best In Class

Good To Drive, Best In Class

The original BMW X1 was one of the first small SUVs to wear a premium badge, and consequently, it proved a popular choice, despite being deeply flawed. Performance:- The entry-level diesel (badged 18d) is available with a choice of two- or four-wheel drive (sDrive or xDrive), whereas all other engines come with four-wheel drive only. We'd avoid with 189bhp 2.0-litre petrol; the diesel engines are better suited to the X1. Rivals:- Direct rivals include the Audi Q3 and Mercedes GLA, but the X1 also faces competition from the smaller Audi Q2 and the Volkswagen Tiguan. Safety & security:- The X1 was awarded a maximum five-star Euro NCAP rating, with scores of 90% for adult protection, 87% for child protection, 74% for pedestrian protection. The rival VW Tiguan scored better for adult safety, but worse for child and pedestrian protection Handling:- Whether you opt for two or four-wheel drive, the steering is weighty and precise, which makes it easy to place the X1 on the road; it's no hot hatch but there's a reasonable amount of feedback. Meanwhile, the stiff suspension ensures there's precious little body roll even when cornering. All in all, the X1 is a very stable thing at all speeds and is more fun to drive than its main rivals, the VW Tiguan and Mercedes GLA Driving position:- There's a good range of adjustment in the seat and steering wheel, plus a central armrest to aid comfort. The driver's seat has plenty of side support too, even on SE models, which miss out on the heavily bolstered sports seats of Sport and M Sport versions Infotainment:- The BMW X1 has a brilliant infotainment system, particularly by small SUV standards. All versions come with a DAB radio, a CD player, a USB socket, satellite navigation and Bluetooth, and you also get a colour screen with crisp graphics. The screen is a rather small 6.5-inch, but the interface is a rotary dial between the front seats surrounded by a handful of shortcut buttons, is wonderfully intuitive. You simply twist the dial to scroll through the on-screen menus and press it down to make a selection Build Quality:- Whereas the original X1 had hard, cheap-feeling plastics throughout its interior, this latest model is about as classy inside as small SUVs get. The X1 has the kind of solid build quality and premium feel that you'd hope for from a premium-badged German car. Even on base SE versions, there's plenty of chrome trim and metal effect inlays to lift things further, while all controls operate with a well-oiled precision. If you really want to push the boat out, leather upholstery is standard on high-spec xLine models and optional on all other trim levels. Running costs:- The BMW X1 is hardly cheap for a car of its size, and it's predicted to lose value slightly more quickly than the similarly priced Audi Q3. That said, reasonable discounts are available if you're prepared to haggle, and some of BMW's PCP deals are also attractive if you need to take out finance. The sDrive 18d model is the cheapest to run, especially if you're a company car driver, although even the more powerful four-wheel drive models aren't too pricey. The 20i petrol version is best avoided, a 20d diesel offers similar performance and isn't much more expensive to buy, and the extra fuel and depreciation costs of the petrol will more than offset the difference. 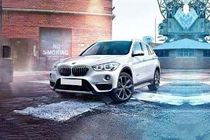