Can the sensible Swedes reinvigorate the estate-type car with its toughened-up V90? 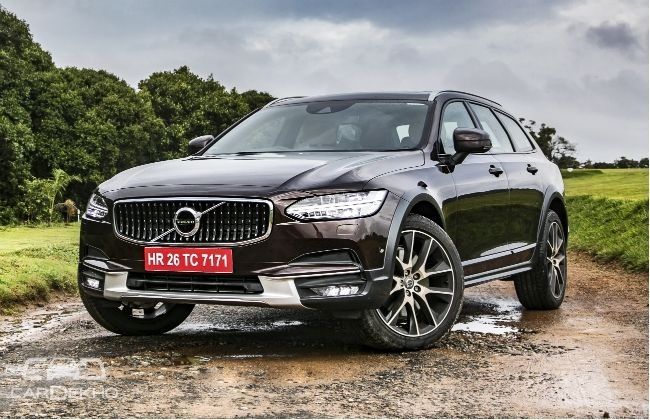 The weatherman warned us about falling in love with Mangalore during this time of the year. Little did he know that everything will go blank as soon as the Volvo V90 Cross Country came into the equation.

Greeted by mesmerising weather, the drive to and from Coorg revealed almost everything about the upcoming Volvo V90 Cross Country. Let’s first unravel what this car is all about. Being a Volvo, it is bound to have a different zest compared to the German offerings. The ‘V90’ badge means it is an estate avatar of the brilliant S90. ‘Cross Country’ simply means it’s a rugged version of the estate. In India, it is the ‘D5’ Inscription variant that’ll be offered. But where does it fit in? Should you pick it over a sedan or even an equivalent SUV? We try and find out.

Once you complete a gentle stroll around the V90 Cross Country, you realise that it doesn’t have a shouty outfit to portray its off-road capability. Another aesthetic worth noticing is how, even after adding plastic cladding all around and jacking up the springs and integrating roof rails, the silky silhouette of the V90 remains intact. Looks might be in the eyes of the beholder but it’ll be hard to argue against the V90 Cross Country’s distinguished air.

From the front and up to the C-pillar, it borrows all its panels from the Volvo S90. Post the C-pillar, all is taken from the V90. The V90 Cross Country gets a massive 210mm of ground clearance, beautifully machined 20-inch, 10-spoke alloy wheels, adaptive and bending “Hammer of Thor”-shaped LED headlamps and bespoke Volvo-style angular LED tail lamps. Underneath, there’s all-wheel drive as standard and, like the S90, comfy adaptive air suspension at the rear.

Overall, the V90 doesn’t stand tall like SUVs do, but this rugged estate’s appeal is apparent when you see it in the flesh.

Deja vu hits as soon as you step inside the V90 Cross Country. Like its 90-suffixed siblings, its dashboard has the same minimalistic layout and everything you touch delivers a sense of absolute luxury and quality. To set the V90 Cross Country apart, wood inserts on the dashboard have been replaced by beautifully finished aluminium ones. There is a new multifunction, heated steering wheel with paddle shifters, which is still unavailable with the S90.

Visibility from the front windscreen is just about acceptable. Since the V90 Cross Country is essentially a hunkered-up estate, the A-pillar is quite raked. Adding to the visibility woes is a huge console that is placed behind the IRVM. It houses the brain of the radar-based safety tech.

The electrically adjustable and ventilated front seats are more than capable of cocooning the passengers in sumptuous comfort. While the back massage function that comes with three modes, variable speed and intensity, helps you relax, the effective heating and cooling functionality really comes in handy. What was a bit surprising was the set of shallow door pockets. Each one can accommodate a one-litre bottle laying down, at max.

Tucked neatly into the roof is a panoramic sunroof that stretches to the width of the ceiling and all the way back to the rear seats. The rear camera and radar-enabled blind-spot identification system, which feeds info to the tablet-sized 9.0-inch touchscreen unit housed at the centre of the dashboard, help understand the dimensions of the wagon. If that’s a bit poor for you, you also get four-zone climate control, heads-up display, electric tailgate (with hands-free opening), power-folding rear seats, auto-dimming IRVM and ORVMs, and real leather all over. Then you hear the 19-speaker, 1,400-watt Bowers & Wilkins sound system, which is one of the best we’ve ever experienced.

We do feel that the integration of the 12.0-inch driver display, which replaces the conventional analogue instrument cluster, with that of the touchscreen tech-centre could have been better. Every time we needed to change any car-related settings, we had to pull over and then make the necessary changes. Moreover, the enormous list of settings and features should have been backed up by a simplistic but detailed help section. There is one, but isn’t very user-friendly.

The V90 Cross Country’s radar-based safety tech deserves a special mention. There is collision mitigation system that applies the brakes automatically if the sensors detect a potential collision at city speeds. Additionally, there are features like lane-keeping assist, distance alert and a pilot-assist system that, at speeds up to 130kmph, keeps the car in the centre of the lane with small inputs to the steering. It gave us a real insight of how the autonomous cars of the future will drive and feel like.

Climb into the rear seats, which have built-in child booster functionality, and you aren’t exactly bowled over. They are comfortable, but lean a bit on the firmer side. Some more under-thigh support would have been nice. You don’t get the seat adjustment or the massage features that are there in the front seats. Then there is the transmission tunnel that eats away a considerable amount of legroom for a third passenger in the middle. There’s plenty of knee- and head-room for a couple to grab a few Zs on the go. The 560-litre luggage space can be expanded to 1,526 litres by dropping the rear seats.

For added weight over the S90, Volvo has equipped the V90 Cross Country with the same D5 diesel engine that does duty in the XC90. The 2.0-litre turbocharged displacement belts out 235PS/480Nm and, courtesy of the Power Pulse Technology, there is negligible turbo lag. The combination of the 8-speed automatic gearbox and an all-wheel drive system helps transfer the firepower effectively to the road. The engine comes to life with just a hint of a rattle but stays much quieter than other, similarly sized diesel engines.

There are a few predefined drive modes to choose from. If you are craving for quicker responses from the car, the Dynamic drive mode does proper justice. The Comfort mode, which tones down the brakes, steering and the engine to a softer level, is ideal for daily commuting. Off-Road mode, which activates hill start assist and hill descent control, does its job well at speeds up to 40kmph. There is also an Eco mode that focuses on lowering fuel consumption. When coasting at speeds above 65kmph, the engine disconnects from the transmission to let you cruise while minimising fuel consumption.

If you aren’t happy with any of those drive modes, you can define one for yourself. For engaging into Individual drive mode, you need to dive deep in the car’s settings. Everything from the driver display on the 12-inch instrument cluster and steering force to suspension setup, powertrain and braking characteristics can be adjusted to complement your driving style.

The drive from Mangalore to Coorg gave us an ideal iteration of a twisty, slippery tarmac that had everything from steep climbs to hairpin turns and a fair share of potholes. In terms of weather, Coorg was in a different league. While approaching our overnight stop, we were bombarded by a sea of clouds. It was breathtaking.

On our way, the V90 Cross Country’s suspension really impressed us. Even with 20-inch wheels, it barely allowed any discomfort inside the cabin. Small bumps at city speeds were dealt with ease. At high speeds, going over potholes was noticeably loud but didn’t eat into the comfort inside the cabin. In fast corners, there was a bit of a body roll but that was brought into check with Dynamic drive mode.

The steering is quite direct and is also well weighted; the steering wheel thickness and the texture of the leather makes it effortless to hold too. However, there is not much feedback from the front wheels, but you can rely on Volvo’s fifth-gen all-wheel drive tech to keep the car poised throughout.

Upshifts on the 8-speed gearbox are fast and smooth. However, the unit isn’t very eager to downshift quickly. There is a bit of a lag before it recognises that a lower gear is required. Being a Volvo and not an R-design one, the transmission doesn’t have a sports mode to complement the paddle shifters.

With its driving dynamics, the Volvo V90 Cross Country doesn’t feel as big as it actually is. It manages to carry its weight in a rather composed fashion. You can drive this wagon fast, dice corners and test its performance limits, but it is clear that its focus is on comfort rather than driving thrills.

It’s not difficult to see why we are absolutely bowled over by the V90 Cross Country. Everything on the car comes part of the standard kit, with Volvo saying that customers will also have a choice to opt for 19-inch alloy wheels for even better ride quality.

At first glance, we believe that it has everything in its arsenal to reincarnate the estate from its long-lost ashes in India. It drives well, comes with top-notch materials inside out, has great ride quality, and is quite spacious for a 2-plus-2 family. Most importantly, it keeps passenger safety at the heart of its design philosophy.

The car is slated for a launch on July 12, 2017, and, based on how aggressive Volvo has been while pricing its cars in India, we believe it will provide an incredibly able alternative to everything from the BMW X3 to the Audi Q5 and the Mercedes-Benz GLC, albeit with a different allure.