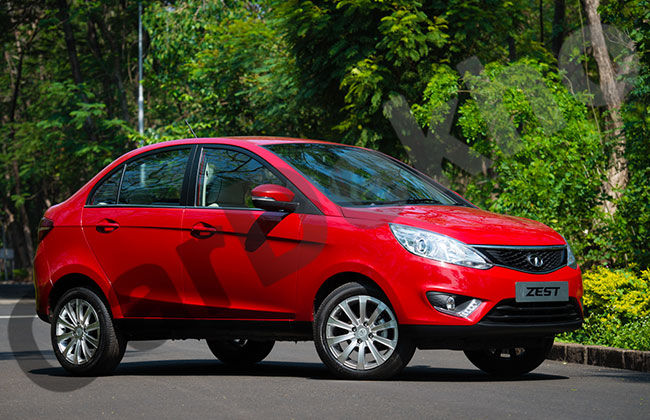 At the HorizoNext, Tata Motors announced it would introduce new products in the coming years to increase its market share and become the second largest in the Indian car market. We saw the entire line-up being refreshed and then the Zest and Bolt were announced. These are the two passenger vehicles and we can see more products coming from Tata Motors, very soon. We got our hands on the Tata Zest and we share our preview of this new compact sedan that is coming from Tata Motors’ stable by mid-2014. Read further as the mystery unfolds.

The Zest is based on the same Vista platform, and both have a similar fascia. The front grille is made from a black mesh grille and the crowned hood has prominent stakes. The headlights meld well with the new grille and this styling does look like an upgrade on the existing Vista/Manza styling. The Zest has day-time running LEDs, while will be a segment-first feature. It also gets projector lamps, but not xenons. They have the conventional 55/60W bulb running.

The side profile is where there is a lot of resemblance to the Vista. The Zest rides on 195/55 R16 tyres. The pillars on the Bolt are blacked-out to make it look like the floating-roof. The Zest retains only blacked-out B-pillar and DLO (day-light opening). The Zest’s rear is compact and doesn’t feel like an after thought. It is more classy than trendy, as the Zest will attract more sober audience. The paint quality also looks premium and has metal flakes to add the touch of classiness.

The biggest USP of the is its interior styling. It has a new smaller multi-functional three-spoke steering wheel, which is good to grip. The flowing centre console also looks stylish and trendy. What remains same from the Vista/Manza are the air-con knobs and side vents, power window switches and the door latch. The instrument panel is sloping from right to the left and a new Harman touchscreen infotainment has been developed. This system has Bluetooth, USB, SD and aux connectivity. This is again a segment first for Tata Motors with the Zest. Lets hope it even gets reverse parking camera too.

The space was always good on the Vista, and the same space has been retained on the Zest. There is no issue of headroom or knee-room even for tall occupants especially in the first row. The seats are also large and comfortable. There is sufficient thigh and back support in both. The Zest rear seat has a more recline as this increases the comfort for the rear passengers, as the Zest targets the chauffeur driven segment too. Also, the Zest is for the premium car buyers and Bolt targets the trendy, hence they get beige and black interiors respectively. The leather on both does feel plush and premium.

The Zest will be equipped with a 1.2-litre Revotron turbo petrol and 1.3-litre Quadrajet diesel engines. The Quadrajet is the tried and tested diesel engine and has been one of the mostly widely sold diesel engine in India by Fiat as multijet or DDiS by Maruti Suzuki. This engine will produce 90bhp of power and 190Nm of torque and the specs of this oil burner remain the same. It will come mated to either a five-speed manual transmission or a five-speed automated manual transmission. This will be the first vehicle under Rs 10 lakhs to get only two pedals with a diesel engine.

The 1.2-litre turbo petrol engine is the new Revotron series of engines from Tata. This petrol engine will produce 88bhp of power and 140Nm of torque. What is new with this engine is that it has peak torque at 1700rpm and 111Nm at 1000rpm. Tata claims that this engine increases the drivability by a great extent, thus making it easier to drive without frequent gearshifts. This engine will also have different modes like economy and Sport for better engine performance and efficiency depending on the requirement. This changes the ECU mapping to match with the driving style and better results. We thought this will be an all-aluminium engine, however it is still a cast-iron block as it helps to reduce noise, despite the added weight. This petrol mill will also be available with a five-speed manual and automated manual transmission too.

The Zest has undergone some major upgrades under its skin. It gets revised underpinnings as the front suspension gets dual-path dampeners that absorb the shocks even better. This similar technology has been seen on the Fiat Linea and the Grande Punto too. This is one of the reasons why they have such a supple ride. At the rear, the torsion beam has also undergone some revision to match up with the front. The rear on the Zest is a tad softer than the Bolt for better comfort for the rear passengers.

The other change includes the new ZF-power steering, which is quick and responsive. At the same time, it is very light to drive as well. The Zest get this new steering technology.

Tata is yet to announce the pricing and the variants of the Zest and the variants haven’t been disclosed yet. These will be launched in the second half of 2014 and shall be priced between the current Vista and the Manza.