Like it or not, compact sedans are here to stay. And while I am not a big fan of the cut-boot sedans myself, there's no denying it fills in a very specific requirement. While they are sedans just about, they come with the whole aspirational value of the 'badi gaadi', or the 'dicky waali gaadi', like my friend's dad calls it.

Manufacturers have left no stone billing it as the real deal, going the extra mile and decking the compact sedans up with features you'd usually find in the C-segment. So, it was only a matter of time then that you could buy a little sedan that had a diesel motor and could shift on its own. We've got two, out of the three options together, to find out which one deserves the cash. 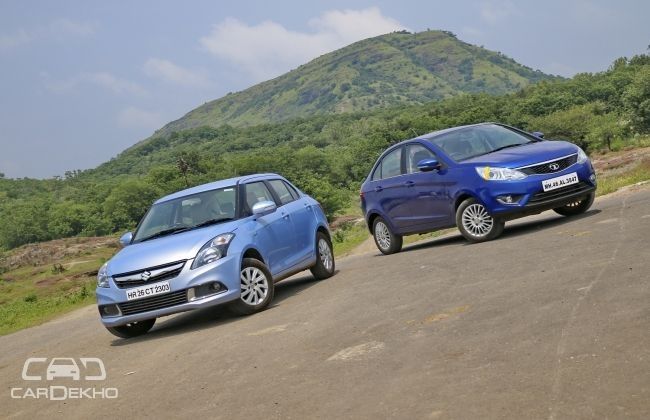 Neither of the cars are exactly good-looking. Both draw heavily from their hatchback siblings, including the face, on-board equipment and engines as well. In fact, space on the inside is identical to the non-boot version as well. Nevertheless, design-wise, I personally prefer the Zest, purely because it's a fresher take on what a compact sedan can be. The boot is slightly high-set, which doesn't make it look all that stubby. Then there are the finer details like the projector headlamps and the multi-spoke alloys that give it some character.

As far as the DZire goes, this particular sky-blue shade looks superb! It has a purple-ish hue to it under sunlight which I particularly like. Even though it isn't the most good-looking of the lot, it does look a lot more sedan-like compared to the Tata. I like the smoked headlamps (and secretly wish they were offered on the Swift) and the little dabs of chrome on the face. In a rare case, Maruti hasn't gone overboard with the chrome garnishing and kept it classy.

Step inside and the differences quickly come to the fore. Tata has clearly opted for form over function – in the Zest's case, that is amply made evident by the lack of usable cubby holes inside the cabin. Even the door pockets are too hollow to hold anything substantial. I resorted to leaving my wallet and cellphone there, since no matter where else I kept it, it would end up under my feet. Things I absolutely love about the Tata include the air-conditioning that almost made me get a cold and the brilliant Harman-sourced music system. Every other car audio system (barring the Tiago) I heard after the Zest felt average at best.

It is also the more accommodating of the two here, and has the better legroom as well as a larger boot. My only complaint here would have to be the slightly hard cushioning, which are a boon over long distances, but can be irritating on office drives and quick errand runs.

I would gladly pick the DZire over the Zest if I was driving to work, purely because the seats feel much more comfortable. The lighter beige upholstery and dash look much more welcoming compared to the all-black layout on the Tata as well. And, credit where it is due, the Maruti has practically aced the concept of ergonomics. It barely takes one time to familiarise himself with the DZire because everything is exactly you'd want it to be. On the equipment front, both are neck to neck, getting automatic air-conditioning, steering-mounted controls, parking sensors and adjustable seats plus steering. Other than the touchscreen infotainment system, there's nothing that the Zest and the DZire doesn't. Space in the Maruti at the rear is strictly average and I just about fit in behind my own driving position.

Talking about driving, I'd pick the DZire again if I was driving myself. Both cars share the same 1.3-litre, four-cylinder diesel engine sourced from Fiat, and also get an automated manual transmissions developed by Fiat's subsidiary - Magnetti Marelli. The only difference, is that the Dzire runs a lower tune - 75PS/190Nm vs 90PS/200Nm - compared to the Zest. One of the major reasons for picking the Maruti over the Tata is that the latter misses out on a creep function. Slotting into 'D' does absolutely nothing, and you would have to gingerly feather the throttle to get going. That practically defeats the purpose of an automatic in my books. The omission seems even more surprising because even the Nano gets it!

Get going, and the Maruti masks the shift-shocks rather well. The transmission cleverly exploits the time you let go from the throttle to execute an upshift, saving you a jerk or two. It also doesn't let the difference in power make itself felt. On the other hand, the Tata's AMT feels slightly unpolished where shifts aren't as seamless, and there's evidently more lag as well. Drive with a super light right foot, and both cars are on their best behaviour, and you would usually be engrossed bothering about traffic or in the music to bother about any sort of judders from the cog swaps. Bury the A-pedal into the mat and both cars will whine and protest as loudly as they can. In all honesty, there's no point trying to wring out performance from an efficiency-oriented AMT, and we'd recommend not bother trying.

The Multijet engine is known to have significant lag under 2000rpm, and both the AMTs do well to mask that. There's a strong rush of power right up to the point where the tacho crosses the 4500rpm mark, post which there's nothing left at all. In both cars, the motors are tuned to sip as little as possible. Don't be surprised to see figures in excess of 20kmpl on the MID if you are careful with the throttle.

Both cars are amazing city-slickers, thanks to the feather-light steerings. Cutting across in traffic congested bylanes is truly a one-handed affair in either. It's the Tata that is comparatively lighter and as an effect, easier to park and manoeuvre in general. The DZire redeems itself as the going gets fast or twisty, where the steering feels well-weighted and confidence inspiring.

I have liked modern day Tatas for their low-speed ride, and the Zest is no different. It is at ease filtering bumps out, and the suspension is evidently softer compared to the DZire. The Maruti isn't crash-and-thud stiff, but won't-roll-in-a-corner stiff. On winding roads, it feels more at ease and doesn't lean in too much. They are pretty evenly matched when it comes to braking, with both offering a sharp initial bite. Safety tech includes a pair of airbags and anti-lock brakes. Just the usual fare then.

Prices are neck-to-neck, and, for the money we'd pick the Swift DZire for it seems like a better-rounded product and has the backing of India's largest aftersales network as well. The Zest does have a lot of goodies in its arsenal that makes it value for money, but sadly that isn't enough to displace the king of the hill that sits at the top purely because it gets the basics right! The Dzire is better to drive, has the better automatic and has Maruti's aftersales backing its claims. There's little surprise why the compact sedan once managed to outsell the Alto, and why it outsells all of its rivals put together. It has truly become the default choice for anyone who just wants a commuter compact sedan.