Sumo has been one of the oldest SUVs in the country and it is still going strong. Born in the early 90s and still on sale, the Sumo has seen several avatars, and there was even the second-generation Grande, which didn’t do that well. But the original Sumo is doing some good numbers and recently it saw an upgrade under the HorizoNext campaign. We share our experience of this SUV with you. 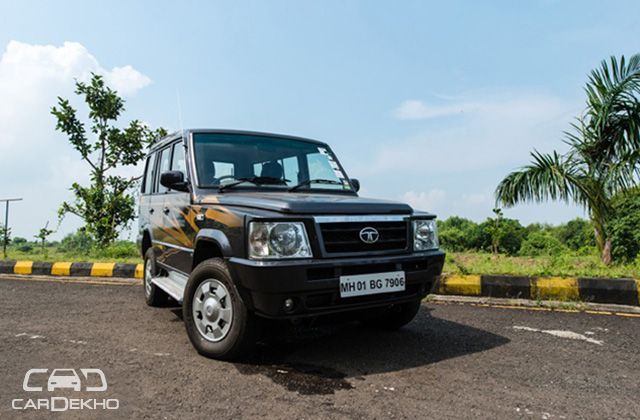 The design of the Sumo was derived from the Mercedes-Benz G-Wagen and the connect is clearly visible. However, because of several updates it has somewhat different.

It gets a new front grille with chrome on the upper lip and with GOLD embossed on it. The clamshell hood is retained and the ruggedness in its styling is retained.

The side profile is the same, however it has been tweaked with some graphics and floating roof elements have been added to differentiate from the outgoing version. We believe that the company has gone overboard with the graphics. The rear too just gets extra graphics and that’s about it. There are no other major changes in the design as all the same panels are retained.

It is the interior that has seen a sea of changes. The new Sumo Gold has refreshed its instrument panel design as it gets the four-spoke steering wheel from the Indigo and Indica family.

The centre console is simple and basic as it comes with air-con and some other buttons to control rear wash and wiper and defogger. There is an aftermarket music system that comes on the top-end model and it has Bluetooth integration too.

The power window switches are located near the gear lever, which makes it a bit inconvenient to use it. The twin dial instrument panel is easy to read as well. This is the first SUV to have dual AC in its segment. The upholstery is also stylish and it does feel good too.

The quality and the fit and finish has been improved by several notches and the interiors of the Sumo Gold are good.

The space on offer can shock many, as it has good head-room and knee-room even in the second row. The third row is also spacious and comfortable to sit in. It is a lot more spacious than competition and even more comfortable too.

The Sumo Gold comes plonked with a 3.0-litre CR4 diesel engine. This is the same block that also powered the Safari until 2007, however that injection was DiCOR. The CR4 is one of Tata’s recent additions to its technology, enhancing the performance and fuel efficiency of the engine. This engine produces 85bhp of power, compared to the DiCOR that was at 115bhp.

The NVH levels are a tad higher than one would have liked. There is some amount of diesel clatter on idling and it’s louder on cold starts. Even the power delivery is linear as the engine produces about sufficient torque throughout the rev range.  The gear lever is tall and this makes it difficult to shift, as even the shifts are a bit rubbery. The clutch is light and not tiring with constant usage in the city. All we wish that the vibrations on the gear knob when a bit lesser than what it is currently.

The Sumo Gold has been designed for good ride. It is meant to take occupants from point A to point B, and it does its good well.

The Sumo Gold’s ride suppleness is excellent and the thick tyres absorb most of the road shocks, giving a pliant ride. We drove it through bad and rough roads and we were impressed in the manner the Sumo Gold glided over potholes.

The handling of the Sumo Gold is decent. It’s a performance-oriented vehicle and it has a high centre of gravity due to its height. But, the vehicle behaves in a better manner when it is completely loaded, when compared to an empty car. The steering wheel is also light and easy to manoeuvre in tight spots because of its smaller turning radius.

The Sumo Gold is a good package for its pricing, despite its generation-old design. However, you would find an SUV in this price range with so much comfort. We recommend the Sumo Gold if you need an affordable SUV with basic features and loads of space and low maintena.