We have been driving around the Skoda Yeti 4x4 which happens to our long term test car currently. After having driven for more than 800kms covering over a month we are now in a position to get a first hand ownership report. 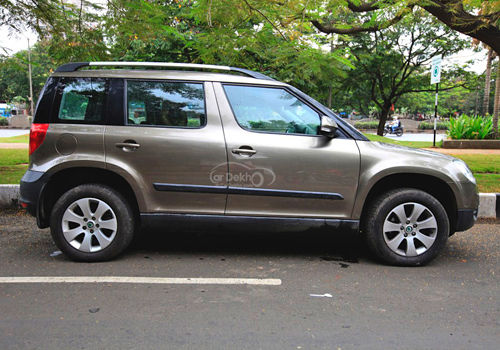 The name Yeti brings images of an ape like giant animal of the snowy Himalayas that is known to terrorise the nearby villages. This Skoda is not a conventional beauty at first glance but it does strike a note in your mind that forces you to have a second look.

There is nothing terrifying in this the 5door compact SUV from Skoda as compared to the monster Yeti from the Himalayas.  The Skoda Yeti has a rugged yet gentle look. The prevalence of straight lines on its body panels are complimented by the subtle curves all around that make a mix of a boxy yet sweet looking part car part off roader.

Our Skoda Yeti was left with us nearly a month ago, so we've had good enough time now to get under its groove and get you its true character. We would speak on the exteriors of the Yeti in our initial report.

Skoda has been on a high for a while with a few new launches and models. The   Yeti happens to be one of the first off roader from Skoda. The Yeti has been around for a while, launched in 2010 in India. The Yeti being a CKD exerts a lot of components from the overseas bins. The quality is remarkable on the outside. The build quality is flawless with highest quality of sheet metal being put in use.

There are no panel gaps or rough edges on the Yetis body. The Yeti we driving has clocked nearly 18,000kms and as a true Skoda it shouts out quality with a capital Q. The door handles still have a feel of a brand new car and so do the doors when you open or shut them.

The Skoda Yeti is easily a bold product that has a very practical, distinctive, reliable and high quality all-rounder. Skoda Yeti has a neat looking face with the unique high mounted round fog lamps and the Skoda family grill with vertical slats having chrome garnish around it gives a very distinctive and unseen face to the crossover.

The sides appear like a giant tall full grown hatch back car with huge wheel arches, large glass area and blacked out A, B and C pillars using some high quality glossy plastics. A neat pair of roof rails makes the Yeti look taller than actually it is and also heightens the visual appeal sideways. The Skoda Yeti Elegance that we driving runs on Goodyear Excellence tyres with 215/60 R16 spec. These tyres are meant for off and on-road drive conditions. The ride quality and handling of a car also depends on the tyre and thread pattern to some extent and the Goodyear Excellence does a mighty good job on the Yeti.

The seven spoke alloys on the Yeti as the variant name suggests (Elegance) look elegant. The rear is flat with a lid spoiler and centre mounted stop lamps making things looks good. The bumpers in the front and the rear are purposely left uncoloured basically because while off roading a lot of rocks and mud hits the bumpers that spoil the paint on them. The bumpers also have cosmetic scuff plates in silver in the front and the rear.

Nothing went wrong or needed attention in that time the Yeti has been here except for the roof radio antenna that was flicked away by some over enthusiast fan of the Yeti and we had to replace the antenna to tune back to our FM stations.

There are things that we like and also a few things that are missed on our Yeti. The super solid build quality is what impresses us big time. Small things like the ease of passenger entry – egress thanks to the in proportion height of the Yeti is a big boon. The auto boot unlock using the car remote also helps when your hands are occupied and u can’t use the key to unlock the boot lid.

The Skoda Yeti has a compact dimension that of just over 4.2 meters that makes manoeuvring and parking it in tight spots super easy, part of the credit also goes to the accurate park sensors in the front and rear. The large expanse of glass area all around makes the Yeti look larger and bolder in proportion. The wing mirrors are electrically adjustable but lack of auto folding mirrors does pinch you when you have to park the Yeti and manually fold the mirrors in tight parking’s.

All said and done the Skoda Yeti has a distinctive road presence that is very uncommon at least in India. The distinctive face of the Yeti makes it stand out among the other mini SUVs. Everything feel like built to lost for ages we forgot very easily that the car we driving had already done 18,000kms.

My family loved the Skoda Yeti a lot and more of that in the next Yeti report. Rains would be hitting Mumbai soon and we would be driving around the monsoon in the Skoda Yeti. Watch-out for our detailed second report where you can read a lot on how the Skoda Yetis cabin feels to be in for nearly a month and also about the Yeti handling the Mumbai rains.