Published On Jan 29, 2017 By Siddharth for Skoda Rapid

Skoda has given the Rapid its first-ever comprehensive facelift. What is new? And how does it stack up against the competition? We find out. 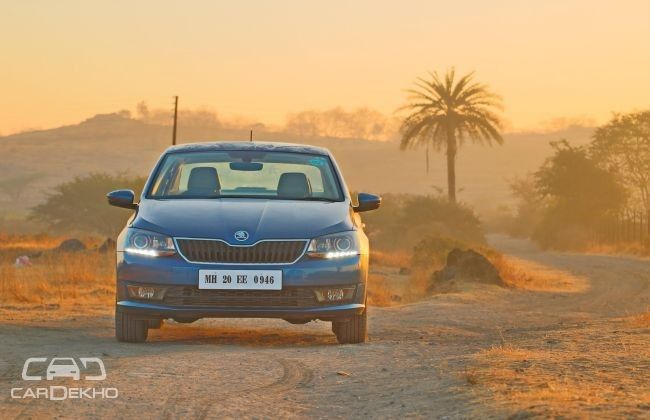 At first, it is difficult to comprehend why Skoda is crying out hoarse over the 'new' Rapid. Sure, it looks new - at least from the front - and has some interesting features added to it, but let’s face it: this is a five-year-old car. Look closely though and you will find that the Rapid, especially in the drivetrain configuration we have tested here, is still one of the best sedans you can have for the price.

The Skoda Rapid facelift is also significant for the company in India – Skoda India was involved in almost every facet of the development of this car. From the conceptualisation, to the pre-production planning, localisation of parts, production and after-sales service – Skoda India has made many changes to the Rapid to make it more competitive in the market.

Finally, the Rapid now conforms to the company's new design language. The headlamps, front grille, bonnet, front bumper are all new. The 'Crystalline' design theme includes the new sleek blacked-out headlights; in the top-of-the-line Style trim, these get projector headlamps and LED daylight running lamps (DRLs). The headlamps certainly add a 'wow' factor to the design; the DRLs are another head-turner (our test unit was in the dull Carbon Steel colour). Together with the indicators, which are a pair of amber bulbs, they aid maximum visibility.

The grille on the Rapid also follows the company's new design philosophy; it has a butterfly's wing-like structure, the new Skoda logo sits on a power bulge on the bonnet rather than with the grille. The 19 vertical slats on the grille add a premium look; the chrome surround adds a bit of flair without being too garish.

The front bumper is all new and complements the angular design that Skoda has set for the Rapid. The air dam now extends from side-to-side, connecting the two rectangular fog-lamp housing. There is a noticeable lip that juts out at the bottom.

What is a cause for concern here is the fact that the fog lamp housing is not recessed in the front bumper. The design flaw could lead to these being the first victims of small day-to-day bumper incidents. Each fog lamp costs a minimum of Rs 1000 to replace, excluding taxes and labour.

We are nitpicking here, but the new headlamps could have been sleeker; when looked at from dead ahead, they seem to be too large for the car. The overall effect also makes the tyres look slimmer than usual - and those are 185mm section tyres!

The excitement about the new design fades a little as you move to the side; The Rapid's similarity to the Volkswagen Vento is clear. The chrome window-sill inserts, chrome door-handle inserts and 15-inch 'Matone' alloy wheels appear to have been added to help differentiate the two, though, the results aren’t exactly successful.

Move to the rear and you get the feeling that Skoda just gave up. You could criticise them for the decision to not update the rear; but the fact that all Skoda cars are designed at their HQ in Mladá Boleslav, Czech Republic could have increased the costs prohibitively.

The smoked effect tail lamps are a familiar sight. So is the boot lid with the aggressive cuts around the number plate holder. New visual features here include a boot-lip spoiler, the new Skoda logo, a chrome strip along the bottom edge of the boot-lid and some new creases on the rear bumper.

Inside the new Rapid, the first thing you notice is the black-and-cream upholstery and the spanking new 6.5-inch infotainment screen.

What you will love about cars from the VW Group is how well integrated everything looks and feels. The infotainment screen is a touchscreen unit, which gels nicely with the familiar-looking dashboard. The infotainment system is now smartphone-compatible via MirrorLink; the system works well with Apple devices for now, full functionality with Android phones depends on the device connected. Though the Rapid only has four door-mounted speakers – the sound quality is just fabulous. There are two things which would have made the new infotainment system perfect – an inbuilt navigation system and it doubling up as a reverse camera display.

These two features should not have been given a miss; rivals – the Maruti Suzuki Ciaz, Honda City and Hyundai Verna – offer them. The more-affordable Volkswagen Ameo has a reversing camera with a display!

The cabin, otherwise, is a good place to be in. The seats are comfortable and well-bolstered, the quality of materials used in the cabin is high and everything seems durable. The driver seat is height adjustable, the seatbelt is height adjustable for both front passengers, the steering wheel has tilt-and-telescopic adjust and there is a nice fat foot-rest. The steering wheel is chunky and has prominent thumb hangers which make it easy to grip, the steering mounted controls are easy to use and have a tactile feel, the instrument cluster with its two analogue dials and informative MID are easy to read. There are enough spaces around the cabin to keep various items; the door pads have space to keep 1-litre bottles and some knick-knacks, the lower centre console at the front has space for two large cups and some other stuff, there is even a tidy space under the front centre armrest.

Almost all the buttons and knobs around the cabin feel well thought of in terms of placement and are a treat to operate – the ORVM control knob on the driver door feels out of place as it is difficult to operate and feels flimsy. The robust feeling cabin was also let down when we discovered that the driver-door mounted electric boot-release button popped-out of its hold every time we operated it. Interestingly, this is a not a new problem and has been reported in test cars when the Rapid was first launched in 2011!

The rear passenger cabin is a nice place to be in – legroom, knee-room and headroom are generous, the seats are well cushioned and the centre armrest is wide enough to be used by two passengers without engaging in an elbow fight. The black-and-cream theme adds to the plush feel inside, though, the view out the side is not much for the rear passengers. All the power windows have a one-touch up/down functionality which is appreciable. The floor-mounted A/C vents with a stowable bottle holder add to the comfort factor, the noticeably large centre hump and the lack of a three-point seatbelt for the middle passenger makes the Rapid a 4-seater at best.

The 460-litre boot can swallow enough luggage for a group of four to go for a weekend trip, the rear seats cannot be folded down for freeing up additional storage space, though. It is not advisable to use the key to open the boot directly, it requires some effort and can result in the key-retract mechanism on the fob to become loose. You can open the boot using the driver-door mounted button or by long pressing the boot-release button on the key-fob.

The Rapid we are testing is powered by a 1.5-litre, in-line 4-cylinder, turbocharged diesel motor. This is paired to a 7-speed dual clutch transmission. The combination is not new for the Rapid – it was first introduced in 2014 on the pre-facelift model. What has changed since then is that the motor has been tweaked for lower emissions – there is also a slight bump in performance on paper.

On paper, the Rapid TDI AT seems to be the best car overall. It has torquey diesel motor, a fast-shifting dual-clutch transmission, a plush cabin and a well-sorted ride.

Testing it threw up completely different results. The Rapid diesel automatic seems to be better suited for the highway than the city. During our in-city fuel-efficiency runs, the Rapid's DSG on auto mode seemed reluctant to shift up. It would only shift up after the engine crossed 2000rpms at most times – even when driving on level roads. The 1.5-litre TDI is not the most silent engine in the segment, though, it is refined. Combine the loud nature of the engine with the reluctance of the transmission to shift up and you have got an uncomfortable cabin to sit in. The centre armrest does interfere with the easy operation of the handbrake lever, but this is not a deal-breaker.

Out on the highway, the Rapid becomes a completely different car; the transmission seems more willing to shift up to high gears at higher speeds, which in turn makes the engine purr away nicely and that leads to an overall better ambience inside. This also showed up on our fuel-efficiency figures - the Rapid Diesel AT managed to achieve 12.6kmpl in the city and 21.44kmpl on the highway. Skoda claims an overall fuel-efficiency figure of 21.72kmpl, which would be difficult to achieve if you were to use the Rapid predominantly in the city.

The Rapid is a fast car – the torquey motor and the fast-shifting DSG help it gather pace very quickly. The 0-100kmph run takes 11.41 seconds and it is easy to reach too-fast-for-our-roads speeds without much effort.

The availability of a hill-hold assist and cruise control are added bonuses; the hill-hold is not just useful on ghat roads, the slight roller-coaster like roads in Pune also put the system to good use, preventing the car from rolling back when starting on slightly inclined sections of road. The cruise control feature may not be as usable, but it is good to know that it is there.

The Rapid has a confidence-boosting ride – the steering has minimal feedback but it is not vague, the pedals are well spaced out, the suspension is pliant but not overtly soft. Over broken tarmac, the Rapid diesel AT does seem to ride a bit harsher, this was also evident during our first drive. At higher speeds, the Rapid feels very stable with minimal body roll around corners. Couple this ride with the fast engine-transmission combo and you have a car that can eat off kilometres without any hassle. Being front-wheel driven, the car does understeer when you try to push too hard (and it is easy to do that), but the loss in traction is avoided thanks to the car being offered with an electronic stability control system.

The Rapid is offered with dual front airbags as standard, the front and rear headrests are adjustable and there are three-point seatbelts for four passengers. Front disc brakes, ABS, EBD also add an additional layer of safety.​

If you are in the market for a good looking, well built, spacious, comfortable, reasonably well-equipped, powerful-but-efficient sedan which will be mainly driven on the highway – the Rapid 1.5 TDI AT is the car for you. If you are looking for city-centric diesel-automatic sedan though, there are better options.