Skoda Kushaq Prototype Drive: A Peek Under The Skin

Published On Jan 25, 2021 By CarDekho for Skoda Kushaq

While the transition from the Vision IN concept to the production Kushaq SUV is still underway, Skoda let us drive a camouflaged prototype to get a better understanding of its most important vehicle in India 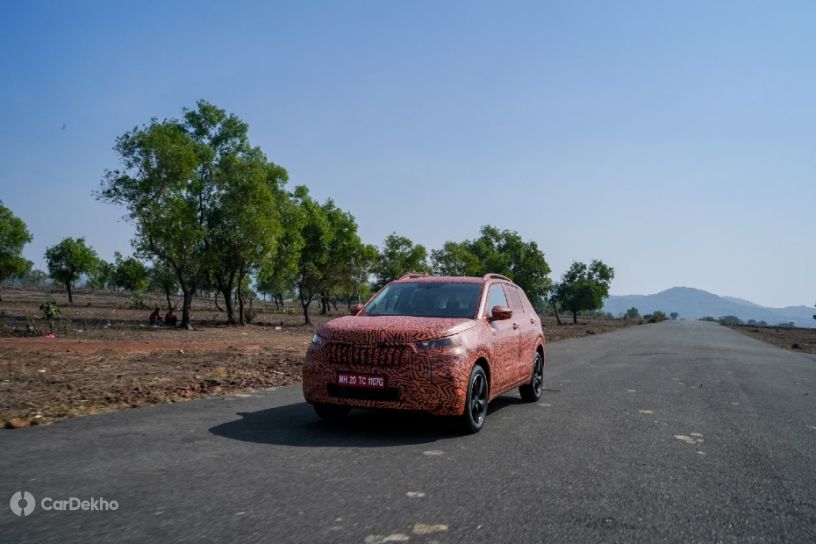 For the Volkswagen family in India, the baton for leading the charge (and a few other markets) passed on to Skoda, and with it started the localisation of their MQB-A0 platform. The first vehicle to be based on this tailored-for-India platform, and setting a course for the future of the group in the country, is going to be the Kushaq. The production form of the Vision IN concept SUV was seen at Auto Expo as a future rival of the Hyundai Creta and Kia Seltos. Safe to say, the pressure on this baby SUV is enormous. Taking early feedback, just to be extra sure, Skoda let us get behind the wheel of two heavily camouflaged (inside and outside) prototypes. Here’s what we found:

The camouflage on our prototype was extensive, so much so that it even overlapped onto the windows and the windscreen. Even the grille wasn’t spared, it was dressed in this orange-black sheet. Understandably so, as the people who often hunt for spy shots were, in fact, standing right in front of the prototype. It even had padding on the bonnet and other panels so as to not reveal the final body lines. The opening for the headlamps and the tail lamp was minimal as well, just enough to let out light for night use.

The wheels on the prototype were cool-looking blacked-out alloys. However, Skoda says the design is not final and more importantly, the rim and tyre of the production vehicle could be upsized to strengthen its stance. The stance was a bugbear for us, even when we saw the Vision IN concept at Auto Expo 2020.

Like the outside, the interiors were tightly wrapped in a layer of plastic. The only bits visible were the ones essential to drive -- like the gear lever, handbrake lever, and the instrument cluster. What we were glad to see, however, was the chunky steering wheel which resembled the one on the concept. The bits of light grey plastic that we could see around the floor console did not look too nice. Thankfully, Skoda has said that these were just one of the options on their various test mules so the production model could feature a different shade.

Not much is confirmed at this point but Skoda will be offering a strong safety package. ESC will be standard on all variants which will help stability on different surfaces. The Kushaq will also feature six airbags, tyre-pressure monitoring system, hill-hold control, ISOFIX mounts, automatic headlamps and wipers.

While the final dimensions of the SUV are still unknown, Skoda has revealed one important measurement - the wheelbase. At 2,651mm, it is about 40mm longer than the Creta and Seltos. As a result, it gets impressive knee room for the passengers. Four adults will be very comfortable in the Kushaq, however, fitting a fifth may be an adjustment.

The 1.0-litre engine is the same we have experienced in the Polo TSI and we were thoroughly impressed by its refinement and power delivery. Here, in the Kushaq, it seems even more impressive. The ignition clatter has been made quieter and more refined. Start going and even the clutch feels lighter, better suited for city traffic. Even the driveability feels better, with the motor not demanding too many downshifts. Setting off in slow-moving traffic and going over speed breakers was easy in the second gear. Also, while there is a good amount of torque from 1000rpm, the engine really comes into play beyond 1400rpm and revs cleanly to 6000rpm. Because the power doesn't fade away drastically there, the hard shifts are smooth as well. What remains to be seen is how this engine performs under full load.

If you are looking to carry passengers and a boot-full, you might be better off picking the 1.5-litre TSI. Getting up to speeds is much easier and quicker here. The power feels strong even below 2000rpm and the wave of torque carries you through the rev range in no time. With the super quick 7-speed DSG by its side, this powertrain feels effortless. However, there was one thing which felt out of place. The cabin quietness was not up to the mark, and it felt noisier than the Karoq. Hopefully, this will remain a prototype issue only.

We suspect this could be down to the prototype because the two we drove, felt different. The ride quality and cabin insulation on the 1.0-litre TSI felt more production-ready, than it did on the 1.5-litre TSI one, which felt a bit jarring at times. Whatever it might be, both SUVs felt solid and had the potential to take on Indian road conditions, while inspiring confidence in the driver.

This drive has answered some of our questions about the Kushaq, especially about its family friendliness and driveability. However, it has also left us wondering about some other aspects, for instance, its cabin insulation. That being said, pondering over these might be futile as these were merely prototypes, not even final production-ready models. Skoda is making changes, big and small, as we speak, to get the Kushaq in final shape.

The Kushaq will be globally unveiled in India in March 2021 and will go on sale by May-June 2021. At the time of launch, the Kushaq will be 92 percent localised, which will later be increased to 95 percent. Evidently, Skoda is serious about making a dent in the Indian market, by not just making an India-focussed product but also bringing it at the right price. While we are impressed with the way it drives and are curious to know more, we will have to wait patiently until its March unveiling to find out just how much of a game-changer the Kushaq could be for Skoda, and most importantly, the Indian car buyer.

Its nothing but skoda kamiq sold in international markets already

Its nothing but skoda kamiq sold in international markets already