Renault has undergone changes on its other SUV, the Koleos recently. We get our hands on the Koleos and find out how good it is. The Koleos hasn't taken off well, even though it is a brilliant product. It has the underpinnings of the Nissan X-Trail and shares the same powertrain too. Renault has upgraded the Koleos and we try our hands on this premium SUV from the French manufacturer. We drive it from Ooty to Bangalore and find out how well does it fare in the Nilgiris. 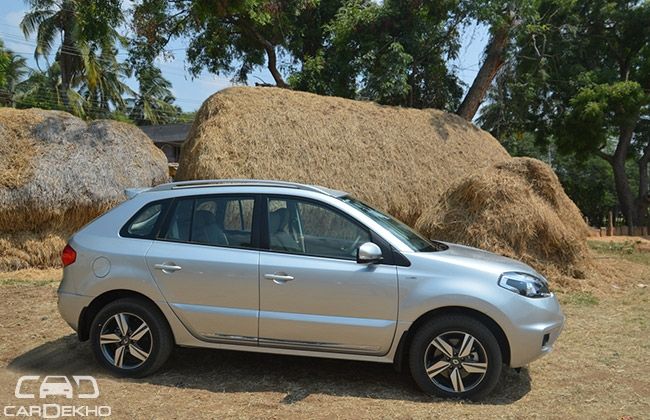 The Renault Koleos is based on the same platform like the Nissan X-Trail. It gets the new stylish front grille with horizontal chrome slats and a larger Renault diamond logo embossed at the centre. The design of the front grille and the bumper has been changed too. The Koleos doesn't get the boxy-like design like the X-Trail, it has a more stylish and trendy look. The French know how to design a car, and see what they can do when given an X-Trail. The result is the chic looking Koleos, and the facelift guises even better.

The inside of the Renault Koleos has undergone a minor change too. The quality of materials used, the fit and finish of the plastic is high quality and there has been no compromise whatsoever. The interiors of the old Koleos had beige interiors, while the new Koleos gets black trim leather for the seats. The Koleos comes loaded with several features and one of the most spoken is the Bose music system.

The crossover even has the Bose badging on the exterior of the car. The quality of the system is just fine. Possibly, we have set very high hopes from this music system, but yes we expected it to be a little bit better than this. Also, this music system is a bit complicated to use too, and could have been wee bit more responsive.

The Koleos can comfortably seat four people. The fifth will be a bit of a squeeze. The front row seats are large and extremely comfortable. The Koleos has both the front row seats that are electrically adjustable, compared to the previous Koleos that only had this feature for the driver's seat.

There is a rear seat control for the AC vents and the vents are mounted on the B-pillar. The boot of the Koleos is a split tail gate and it is extremely large to carry weekend luggage.

The Koleos stills comes with same 2.0-litre dCi engine, however the power ratings have now been changed. It now produces 171bhp of power and 360Nm of torque- an increase of about 20bhp and 20Nm. There are different transmission options that are available too. It has a manual transmission on offer as well and even a 4x2 on the manual. The ARAI claimed mileage for automatic has bumped up to 14.56km/l from 13.7, and the manual 4x2 returns about 17.2km/l. The engine NVH is fairly low and we have always liked this oil burner, even on the Nissan X-Trail. This engine now has more power and even the acceleration is much better.

The six-speed self-shifting transmission on the Koleos is slow and it does blunt the engine's performance to a good extent. Press your right foot and the engine takes a while to get that thrust from the turbo. The transmission does take a bit of time to downshift. Once out on an open road, the Koleos shines and it doesn't feel that it will ever run of steam. The real world efficiency that we got in the Koleos was about 7-8 km/l on a single-lane highway.

The Koleos is a off-roader, not more of a performer but a comfortable ride. It has sublime ride and the suspension does a good job of soaking up all the bumps and road shocks. The ride is sorted even on bad and rough roads. The 17-inch tyres also help to reduce the road shocks and even the ride is sorted. The underpinnings of the Koleos remain untouched, on the facelift version.

The handling of the Koleos is just fine. It is softly sprung hence it has some amount of body roll on it. The steering wheel is also light and not so tiring even on long drives. The Koleos now also has hill descent control and ESP as added features on it.

The Renault Koleos has received some minor upgrades on the 2014 model year. Now, it looks even better and has better power too. The pricing is just fine, however Renault needs a better reach for such a product to be sold in better numbers. It is a good product with French styling and high quality materials.