The Evoque has always been a stylish and probably one of the most gorgeous SUVs that ever made it to production. Since its launch in 2011, Land Rover has increased the production capacity to three shifts to meet the demands of this SUV. For the 2014 model year, the British marquee has further enhanced the driving dynamics of the Evoque. We can expect this 2014 model year vehicle to make its way into India by the end of 2013 or even the start of the next year. We get our hands on this new model year Evoque and share our initial driving impressions. 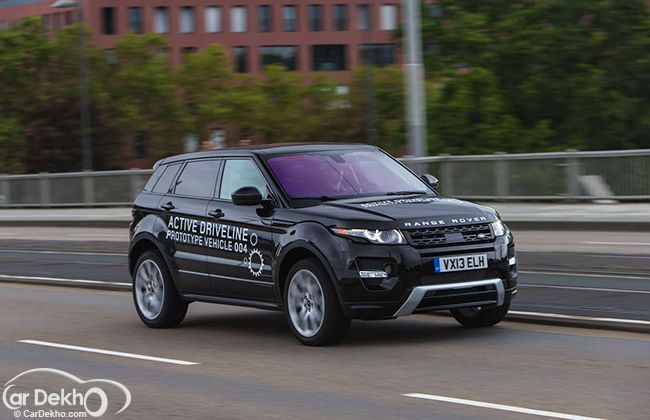 The design of the Evoque is timeless and it isn’t very often you come across such a design. Hence, Land Rover hasn’t made any changes to the styling, expect for adding some more colour options to this SUV. The allow wheel design has been changed, but again that is optional.

Majority of the changes are made to the mechanicals and not to much has been done to the cosmetic styling. Hence, the interiors of the Range Rover Evoque haven’t received any changes. It is the same plush and lounge-like on the inside. It has the rotary gear-shift and the same buttons to change the Terrain Response mode.

The front row seats are large and comfortable for those long journeys and the second row has decent room. The boot is large enough to gobble luggage for a weekend. In terms of bells and whistles, the Evoque in Europe will gets parallel parking assistance, which we aren’t sure if will come to India.

Here is where the major change has occurred; the Evoque will now come with a self-shifting nine-speed ZF transmission— codenamed as 9HP— and a new GKN Active Driveline. This new nine-speed transmission that will be offered on the 2.0-litre petrol and the 2.2-litre diesel engines. We will soon see most of the JLR products that are currently having six-speed boxes to upgrade to either the eight-speed or nine-speed transmissions.

This is a single clutch epicyclic gearbox with the conventional torque converter too. Land Rover claims that this box is lighter than the older one due to the usage of lightweight materials. Increase in number of gears means the torque is more evenly spread. The initial torque has also been increased with the first gear, which means more torque from standstill, especially when you have a hill start or on slippery surfaces. On regular starts, the Evoque begins in the second gear, unless you change it to the first with your paddles. One can use the first gear, as low torque if off-roading.  The nine-speed box has four overdrive gears than six that had two. This means better fuel efficiency as well. One can engage into the ninth gear at about 100-120km/hr, which means further improvement in the fuel efficiency. For the European markets, it will even help to reduce the carbon footprint.

The Active Driveline is a new driveline has been developed by GKN. When starting from rest, the transmission powers all the four wheels and after 35km/hr it switches back to front wheels only. This helps to increase the fuel efficiency as the vehicle is cruising.  After 180km/hr, the ECU once again switches to all-wheel drive for maximum grip. The Active Driveline helps to improve the acceleration and also features Active Torque Biasing with electronic-Diff (e-Diff) technology to distribute torque between the rear wheels, optimising traction and stability.

In addition, a Torque Vectoring by Braking feature, standard on all SD4 and Si4 derivatives, further enhances agility and safety by redirecting torque between all four wheels to counteract understeer. It features in both the Active Driveline and the Evoque’s standard four-wheel drive system. We can possibly see more vehicles from Land Rover to get these features.

The ride of the Range Rover Evoque is smooth and the same supple. There has been no compromise on the ride as the underpinnings remain unchanged. We drove it on smooth German city roads and hence we could not really comment, but as the current Indian spec vehicles have a pliant ride.

The handling we believe will have improved, as we didn’t cross the speed of 80km/hr as the driving was in the city. But we are certain that the handling would have become even more sharper as the new Active Driveline adds on to make driving mistakes forgiving. The steering wheel is also light and has a fait bit of good feedback too.

The Range Rover Evoque 2014 has been a further upgrade in its existing mechanicals. Now, most of the buyers get it for its styling and exclusivity. Now, Land Rover has ensured that no one can even point at the mechanicals and show any other SUV in the same price range to be superior. So, the Range Rover Evoque as a package has just become even better.