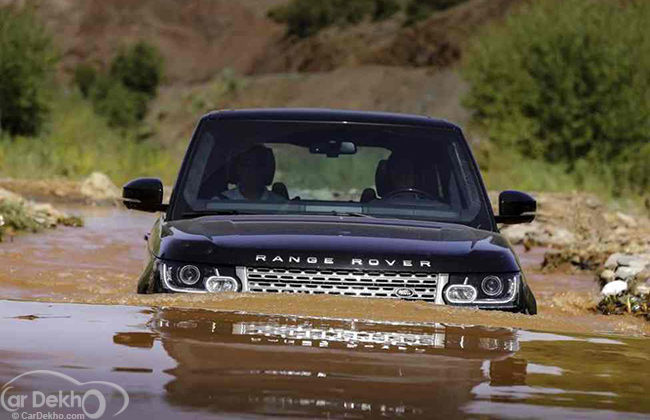 Although French are famous for their wines, other countries like Australia, Chile and South Africa have come up strongly in the winemaking industry. However, most of them still use the French wood barrels as nothing can match it.

Even though the American barrels are good, it cannot match the French wood. Similar is the case, here in consideration. Range Rover was the first luxury off-roader, and since then many manufacturers have come up with luxury SUVs, but Range Rover still stands-out in the heavily crowded section. Majority still look upto the Range Rover.

After four decades, Land Rover has rolled out the fourth generation of Range Rover. We are lucky enough to get our hands on the SUV, even before its launch in India. As it will be a CBU, not many changes will be made in the car. So, we share our initial expression of the vehicle.

The front bumper doesn’t bulge out and it feels more like a single unit on the car. This makes the Range Rover look more polished. Even fog lamps have been redesigned and out go the round ones. The side metal scoop no longer exists on the new fourth-generation, the rocker now looks more muscular and also the slope of the D-pillar has been reduced. One can instantly recognize the connection of the new-generation to its predecessors with just one glance at the silhouette of the new Range Rover. Even the tail lamps are now LED and some part of it extends a bit closer to the C-pillar.

The new Range Rover is the first SUV to have an all-aluminium monocoque construction; this has made it 420 kilograms lighter than the outgoing version. Land Rover states the reduction in weight by 39%- which is impressive! Not only have they cut the flab, but also reduced the aerodynamic drag by 10%- making the co-efficient of friction to 0.34. Hence, the new Range Rover is lighter and has a smaller carbon print as compared to the outgoing model.

The quality of interiors is top-notch and makes you feel lavished. The interiors of the petrol Autobiography version of the Range Rover are trendy, while that on the diesel is subtle— perfect for a three-piece wearing person who would want to have champagne from his small chiller box. Just like the weight of the SUV, designers at Land Rover have reduced the buttons on the I.P. by 50 percent. This was possible due to the new touchscreen system, which has Bluetooth, navigation, music and TV options. There is also an optional Meridian music system that produces 1700W through its 27 speakers.

There is sufficient space in the front row and the seats are large and comfortable. The wheelbase is now increased of the new Range Rover has increased the interior leg space in the second row by 118mm. The second row could have been even better, but it is definitely an improvement over the previous generation. The rear seats are available as seating for two or three. The rear seat package is also available in the Range Rover, just like the Jaguar XJ. This is for additional luxury for those who get chauffeur driven.

The level of insulation on the new Range Rover is fairly high. There is hardly in sound that intrudes into the cabin and even Land Rover compares the insulation with flagship models of German cars like the Audi A8, Mercedes-Benz S-Class.

The new Range Rover will be available with two engine variants for India, which will be the 4.4-litre TDV8 diesel engine and the 5.0-litre petrol. The 5.0-litre is the supercharged one that whips 507 horses to produce a thrust that will blow your mind. This powerhouse also propels the XK R, XF R and the XJ. Push the start button and the engine blurbs to life. The amalgamation of grunt from the exhaust and the initial thrust from the engine is a super fodder for an enthusiast’s ears. This is irrespective of its supercar acceleration. Floor your right foot and get ready to get pushed back into your seat. The surge created by the engine will produce a bellow in your chest.

The 4.4-litre V8 turbo engine is the similar to the previous generation car, but has undergo some alterations to enhance the performance levels and full economy and also some weight reduction. However, the biggest change in the performance of this engine has occurred due to the new all-aluminium construction of the Range Rover chassis. This has further helped in the acceleration of this engine. The 4.4-litre’s initial plunge of torque is phenomenal and it makes driving more enjoy, just like a petrol car.

All the new Range Rovers will come plonked with an eight-speed self-shifting ZF transmission. This is the first of the Land Rover’s to get eight-speeds. The shifts on this boxes are decent and even the shifts are smooth. You do not really miss the double-clutch box thanks to the prowess of the engine.

The reduction in flab is the biggest contributor in the augmentation of the driving dynamics of the new Range Rover. Land Rover had stated this, and we realized it the moment we drove. It is far better than the outgoing version. The handling is much better than the previous car and even the new steering as well.

The ride like the old Range rover remains plush. Our press demonstrator had 20-inch wheels, which made the ride a tad stiff.  The ride on the 20-inch will be composed, as the Range Rover glides over potholes, and sometimes crashed over the big ones.

The Range Rover excels when it comes to off-roading more than how it behaves on the road. We drove it in sand dunes, rocky terrains and even in rivers where water was up to the hood during our drive in Morocco. The Range Rover soldiered on, without any stopping. Our Range Rover never had to be towed out. The ability of the Range Rover to off-road is simply phenomenal as we tested the real endurance of the vehicle.

The new Range Rover is a complete vehicle as Land Rover claims. Not only does it have good road manners, but also it is the most audacious when it comes to dirtying its boots despite wearing tuxedo clothing. Even the high levels of sophistication and luxury of the Range Rover makes it exclusive. However, the Range Rover Autobiography will cost about Rs 1.7crore, which a bit too steep. JLR is confident about its sales. We can’t comment on the sales numbers, but we are very confident about the ability of the new Range Rover.