Published On Mar 17, 2016 By Arun for Mini Cooper Convertible 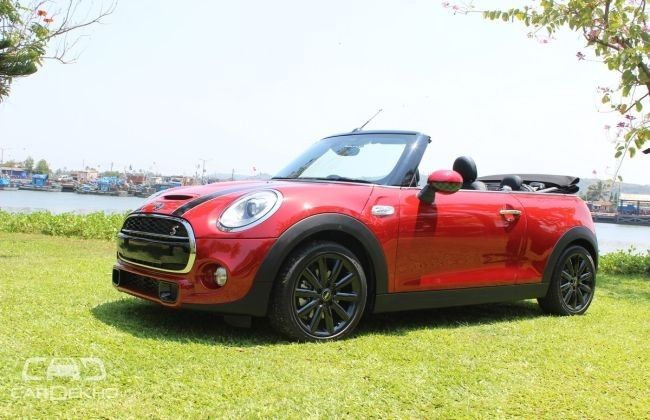 If I had a penny, for every single time I yearned for a Mini - I'd possibly have enough money to buy one. Maybe it's because I've grown up watching Mr. Bean be his hilarious best while driving his trademark green Mini. Or because The Italian Job made me want to be a part of an adrenalin filled dash. All said and done, the Mini brand has been an icon in itself. It's been everything from a nippy little runabout for the city to a motorsport legend. Naturally, when I got the chance to get behind the wheel of something that carries such heritage, I was elated.

The Mini of today isn't mini anymore. It has transformed into being a big (yes, big) and plush luxury hatchback that will take you places while it grabs a lot of attention. Speaking of going places, isn't a convertible THE best way to soak in the scenery when on the move? Well, we took the Mini Convertible for a spin in bright and sunny Goa to find out!

Like we said, the Mini isn't mini anymore. While it still looks like one and you wouldn't mistake it for anything else - the added bulk is instantly noticeable.

Everything about the design is a matter of carrying forward a tiny bit of Mini history. The circular headlamps with LED daytime running lights, the vent on the hood and the sleek lower airdam are all trademark traits. Also, the wheels are pushed all the way out towards the bumpers, making the overhangs as short as possible - something that is again, quintessentially Mini. The rounded bumpers and the compact proportions do make it look cute.

The highlight of course is the fabric roof, that can be folded down away in 18 seconds. If we could, we'd have the roof down all the time. Not only does the Mini look a million times better with the top down, but it also makes the cruise so much more enjoyable. Unlike most other modern convertibles, the fabric roof folds down in a pram style bundle and sits on top of the boot.

We like how Mini have ensured that the design isn't drastically different and stays true to its roots. At the same time, the hatch is very modern and contemporary - incorporating almost everything a luxury hatch should have today. The Cooper is beautiful blend of retro and modern, something we really like!

Step inside the Cooper and you’re surrounded by what possibly is amongst the most driver oriented cabins we’ve seen in a very long time. The seats are snug, the steering is just the perfect size and everything you need is half an arm length away. A similar retro meets modern cockpit style theme is followed on the insides, with a lot of circular elements and old-school flip type switches - which look ridiculously cool! The materials used are straight from the top-shelf. Everything feels solidly put together and looks (and feels) like it will last an absolute eon. Other than the design, there isn’t anything that would wow you though. It’s got the standard luxury hatch fare: a touchscreen infotainment system, navigation, reverse parking sensors - the lot. Nothing out of the box, at all.

We really have to commend the seats on the Mini, especially the front row. The side bolstering, lateral support and cushioning is simply amongst the best there is. There’s plenty of range to adjust the driver’s seat and getting into a comfortable driving position is hardly a task. There’s so much support that you'd forgive the seats for not being electrically adjustable.

The rear though, is a completely different story. Although Mini claim the knee-room has improved by 36mm, the rear bench remains more or less unusable. But yes, the Mini does feel slightly more accommodating than before. The bootspace has now been bumped up to 215 litres which is fairly usable as well.

The 2.0 litre, twin turbocharged petrol motor is a hoot to drive! Throttle response is instant, the 6-speed steptronic is precise (and not to mention quick) and the motor makes a really nice, raspy exhaust note as well! Specs remain identical to the Cooper S 3-door, with 192 horsepower and 280Nm of torque at the disposal of your right foot. That said, the weight is considerably higher compared to the hard-top, courtesy the added stiffening to the chassis.

There are three modes to drive the hot hatch in: Green, Mid and Sport. The names are self explanatory and needless to say, we were in Sport throughout. The motor will feel at home whether you are going flat out or cruising along the motorway. The torque kicks in very early in the rev range and stays with you right upto the redline. It rarely ever, feels out of breath. The 6-speed steptronic transmission too, gets the job done really efficiently and quickly. The  paddle shifters are the perfect tool to have around a set of twisties (second best to a manual, ofcourse).

Speaking of the twisties, the steering on the Mini is so delightfully precise that you wouldn’t let go of a single chance to attack the corners. The feel is spot on and so is the feedback. You know exactly what the front wheels are doing at all point of time. The suspension is set up to let you have fun. Which means you will be grinning when you floor it through a pass, but secretly wish for something for comfortable when you take it around the city. The stiffer suspension makes it an absolute joy to throw into the bends. Dial in the fact that the steering is as obedient as your labrador, the Cooper Convertible can be a lot of fun! That said, do not expect it to be as sharp and nimble as its hard-top sibling.

We had the chance to do a quick braking test and a slalom with the convertible. It stops from 120 to nought in 40 metres. That is mighty impressive braking power. The car doesn't loose it's line under hard braking too, which is again - commendable. The slalom really brought the ‘go-kart’ in the Mini alive. We were grinning ear to ear after going for a quick couple of runs. Remember this, if you do not have a wide grin and a really fast heart rate, you haven't explored what the Mini can do.

Since we’re talking about the convertible, let us say that top-down motoring is rather liberating. Having acres worth of headroom is secondary when you have a million miles of sky as the roof. The experience is truly a lot of fun. It almost makes you wish the weather around our country was a lot, lot better!

The Cooper S Convertible is a really fun alternative to the Volvo V40, Mercedes-Benz A Class and the BMW 1-Series. The Mini’s party piece has always been ‘fun’, and this one is no different. At Rs. 34.9 lakh, the Mini isn’t exactly a bargain. Tick some options on the list and you are looking at an on-road price that is easily around 50 lakh rupees. Is it worth it? YES!