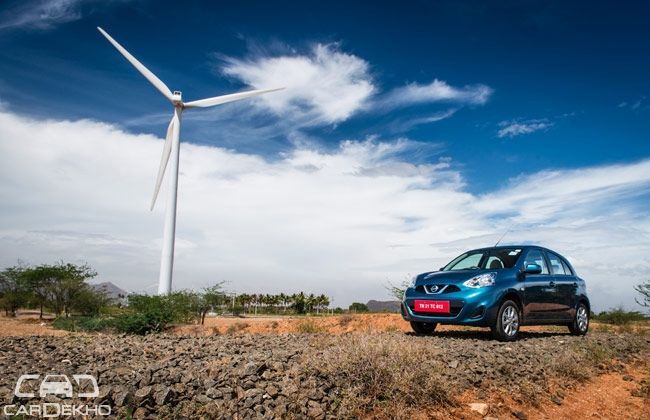 Nissan began its Indian innings with the Micra, even though the Teana and the X-Trail where on sale. This B+ hatchback was the company’s first mass production model for India. The Nissan Micra got a facelift recently and we had the opportunity to drive the Nissan Micra in Madurai.

The company has been aggressive with the product pricing, however we still have to wait for the official pricing of the Micra facelift, which will be revealed by the end of this month. We had even done a news story on the Nissan Micra being revealed in the UK. This vehicle is being shipped from India to other nations including Europe. To know how good the titivated version is, read our review of the Nissan Micra facelift.

The Nissan Micra was a cute-looking hatchback, and now it gets a more aggressive stance, as the new front of the vehicle resembles somewhat the Nissan Juke. We say so, either because it does look similar or the Juke-R is one of our favourites. The front grille gets the V-shaped chrome front grille with new headlamp design, like that of the 370Z. The honeycomb grille and the headlamp design melds well with the redesigned crown hood with prominent strakes. Even the front bumper has been reshaped and so are the fog lamps, which are now triangular in shape.

The silhouette of the Micra remains untouched, however a new design for the alloys has been incorporated. The boomerang has been retained on the roof. The rear too is the same, however it now gets a new set of tail lamps with LED cluster, than the conventional bulb. The changes are minimal and are effective, making the Micra distinguish from its previous styling.

Again, the changes on the inside are subtle but noticeable. The centre console has been revamped and it now it’s a piano black finish— which is glossy— and has rectangular air-con vents than the circular. The music system has been changed, and this one gets USB and even Bluetooth connectivity.  Reverse parking camera and steering mounted audio controls are other new features.

The material of the seats has been changed too and the same material is used on the door pad. Everything else remains untouched. The instrument cluster, the gear knob, the power window switches and even the design of the steering wheel.

The range topping Micra, which is the XV Premium is available only in diesel version and it gets i-Key (keyless entry and push start and stop), electrically folding mirrors, steering mounted audio controls, alloy wheels, ABS, rear parking camera and even Bluetooth connectivity. The Micra is still a feature-rich product and good value for money too.

Nissan is offering the Micra with two engine options, first being the HR12DE petrol that is the 75bhp, 1.2-litre three-cylinder mill and the second is the 1.5-litre K9K diesel engine. The petrol now comes with a five-speed manual transmission and the second option is the CVT.

We had always loved the petrol engine of the Micra as it was highly refined, and even the power delivery is linear. It never felt like a three-pot mill ever and has been amazing when it comes to the driving characteristics of the vehicle. This petrol engine now comes with a CVT box option that makes it effortless for those who drive within in the city. This is the same XTronic technology that we had witnessed in the Sunny too. With no gears, the shifts are smooth. However, the lag is felt when you floor the throttle. The general characteristic of the CVT box is to rev close to the redline when given the beans. The mileage for the Micra CVT hasn’t been released officially by ARAI, but Nissan is confident of the figure being above 19, exceeding the fuel efficiency of the manual transmission under the ARAI test cycle.

The diesel engine on the Micra is the same K9K that churns about 64bhp of power. This diesel is loud on the outside, however the insulation on the inside makes it quiet, as no engine sound intrudes into the cabin. The power delivery is linear like any petrol car and there is no sign of any turbo lag. This engine doesn’t have outright performance, but are brilliant drivability. Lug it into a higher cog, and it will potter around in city traffic and overtake with ease. The engine shows no sign of struggle at low crank speed. Only drawback in this powertrain is the gear box. The shifts on this box are a tad rubbery.

Micra is a hatchback designed for daily city driving, hence its suspension has been tuned better ride. The suppleness of the ride is good as the dampers adsorb most of the road shocks and vibrations, even when driving on a bad or uneven road. Potholes are also well taken by these springs to keep the occupants comfortable.

The handling of the Micra is decent. The alacrity of the chassis isn’t like that of its European competition, but it is definitely good for daily city driving. The steering wheel is light too and it does make it easy to drive in heavy traffic without any hesitation.

Micra gets some prominent changes and upgrades too. The added bells and whistles are now becoming the must-have features in sedan and we believe these features will soon trickle down into the hatchback segment. We expect a minor hike in the price with these new added brownies and the CVT will be about Rs 50,000 more than the Micra petrol manual.