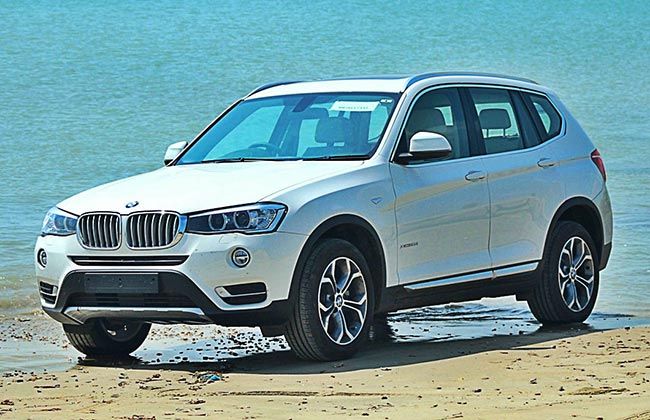 BMW X3 created a new segment when it was launched in 2003 and since then has sold more than one million units worldwide. Sporty drive, premium interiors and agile engines are some reasons that made the X3 a success. But like many other cases, it got bettered by the competition. When the second generation X3 was launched in 2010, the X3 was already capable car with its amazing driving dynamics and practicality. The X3 grew both in size and feature list, boasting best in class interiors and space. Now, BMW has launched the X3 facelift with minor styling upgrades and a new engine to give the X3 a better position to fight the competition.

The facelift of the new BMW X3 brings most of the changes to the front of the car. The X3 now gets a face similar to that of the 3 Series and the new X5. The new twin circular headlamps are larger and now join the kidney grille, which in itself is more prominent. The front bumper has also been tweaked to look more modern. Most of the X3’s rear remains unchanged except for a newly styled bumper. The X3 facelift also gets newly designed 18-inch alloy wheels and outer rear view mirrors with integrated turn signal indicators.

The X3 has always looked like its bigger brother X5 and the facelift drives the point much closer. Head on, you can get confused with the two cars. Muscular is how the X3 can be described thanks to its sculpted lines on the bonnet and swooping lines to the sides. The new 18-inch wheels fit well into the flared wheel arches and the black body cladding around the car add to the rugged profile.

Get inside and it’s a familiar story. Almost all the BMW cars now have identical interior design and it’s not as bad as it sounds. The build quality and finish of the interiors are top notch. Our test car featured dual tone black and beige interiors with the beige neatly sandwiched between the black surroundings. The dashboard as always is driver oriented and the controls are easy to reach and use.

The interiors of the X3 are a joyous combination of luxury and comfort. There are chrome highlights and highlighted accents to add to the premium factor. Both the front seats get electric controls and memory functions to get that perfect view of the road ahead. Other interior features include panoramic sunroof, dual zone automatic AC, rear AC vents, sunscreen blinds for the rear windows, parking sensors (no rear camera though), cruise control, day and night mirrors etc.

The front seats offer amazing comfort and support. Space at the rear is also good with great legroom but under thigh support could have been better. However, three persons can sit in the rear with reasonable comfort. The rear seats have good reclining angle and are well suited for long journeys.

Storage space in the new X3 comes in big door pockets, deep glove box and cup holders (the front cup holders come with a slide cover). The rear luggage space can accommodate 550 litres of things and can be increased to 1600 litres by the folding the rear seats flat.

One of the important changes to the refreshed X3 is the engine. The X3 facelift gets a new 2.0-litre diesel engine (which makes its global premiere in the X3 and is expected to be made available in other models soon) and this will be the only one engine on offer as BMW has taken the 3.0-litre diesel engine out of the equation. The 2.0-litre engine makes a maximum power of 190hp at 4000 rpm and 400 Nm of peak torque between 1750 to 5750 rpm. This is 6 hp and 20 Nm more over the older engine. BMW has worked on the refinement of the engine and you can barely hear it from inside the car.

The engine’s throttle response has also been improved resulting in much better acceleration in both highway speeds and city traffic. The low range response of the 2.0-litre engine is definitely appreciated and the multi driving modes offer a wide range of settings for driving under various situations.

Drive the new X3 and the typical driving characteristics of a Bimmer come alive from the steering. The engine revs smooth while the 8-speed automatic gearbox changes gears effortlessly in both smooth and stressed situations. The size of the X3 does tend to show some body roll around the corners but it is kept to a minimum. On the highways, the X3 keeps the momentum building in minimum revs without feeling exhausted. The Sport mode offers the best possible combination of settings from the steering, suspension, engine and gearbox response for driving enthusiasts but still when you put your foot down, the downshifting does take some time. Sharp steering is a typical BMW trait and the X3 is no different. The response of the steering is immediate to any change and the feedback it provides is also great.

The ride is what you will expect from a BMW, a tad more on the firmer side. The run flat tyres are for aiding dynamic driving and the irregularities of the Indian roads do filter through. However, the Comfort driving mode should soften things up. The X3’s all-wheel drive system also proved to be one of the capable ones as we took the car to some soft off-roading too.

With a new engine and updated styling, the new BMW X3 is better than ever. And with features such as bigger alloy wheels, panoramic sunroof and more, the X3 is equipped to the brim. Though the 3.0-litre V6 engine is sorely missed (coming soon however), you will get a better packaged X3 for your buck. The X3 will always be a driver oriented model as with other BMWs but the comfort and practicality of the car