If you had about Rs 50 lakh or so to spend on your new car, the most obvious choice would be something like the Mercedes-Benz C-Class. That said, most people who do buy a car in this category are those that are used to an SUV of some sort and want to upgrade to an SUV again, but still want the luxury badge that a C-Class offers. And strangely, Mercedes-Benz never had anything to offer in this segment. You could get a cheaper and smaller GLA or a larger and more expensive GLE but there was a large gap in between the two. Now, though, Mercedes-Benz has brought us the new GLC SUV, and we’re here to tell you if it is the perfect car for you. 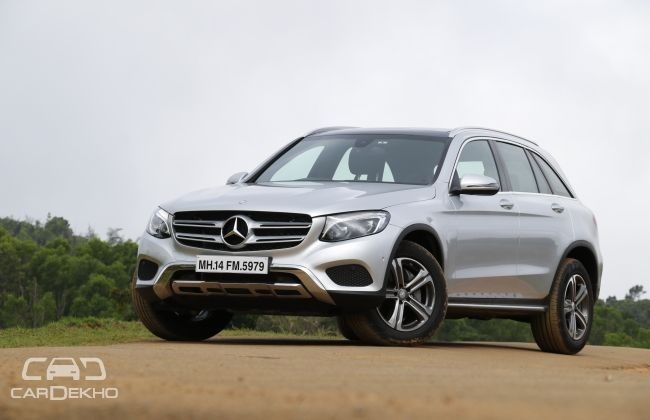 The Mercedes-Benz GLC is based on the C-Class not just in terms of the platform but also in terms of styling and design. Starting from the front, you get a large two-slat grille and swept back LED headlamps that get a set of sleek daytime running lights that is very similar to its sedan counterpart. You also get a very prominent chrome skid plate on the bottom along with two large vents on either side. Combined with the muscular bonnet, the GLC does look very classy but could have been a lot more aggressive to accentuate its SUV character.

The side profile is pure SUV though, with a set of large wheels with chunky tyres, a plastic cladding that runs across the car and aggressive side steps. You also get a sloping window-line that offers a mix of good visibility and good design. But the rear is where the GLC looks the best from. With tail lights that have been inspired by the C-Class coupe combined with a well crafted tail cage and a built-in spoiler, the GLC looks aggressive and classy. Like all modern Mercedes-Benz cars, you also get a set of dual exhaust pipes along with a brushed-finished diffuser. As a package then the GLC is one of the most balanced SUVs we have seen in recent times but, as we mentioned earlier, a bit more aggression (especially in the front bumper area) could have certainly helped.

The GLC and the C-Class share the same interior and although we have extensively used the latter as a long term test car, the bold and well designed dashboard on the GLC still feels fresh. You get a large centre console with polished wood paneling combined with three round AC-vents that get an aluminum surround. The quality of all the switches and buttons is top of the line and everything oozes a sense of premiumness that all modern Mercedes-Benz cars seem to have. The GLC also gets a floating screen like the C-Class but strangely does not get features like Apple CarPlay. We would have also liked to see the smart display LCD screen instead of the traditional dials on the speedometer console.

The silver colored car we drove gets a black leather interior and although we personally prefer this as it looks sporty, most Indian customers will want the beige interior package which you get with the darker colors since it makes the cabin look brighter and a lot more premium. The seats themselves are very comfortable up front and since the GLC comes with an electronically adjustable steering wheel, you can find your perfect driving position with ease. Whenever we test or drive a luxury car we do tend to give more importance to the rear seats and the GLC certainly does not disappoint. The backrest angle on the rear seat is great and offers very good lumbar support and the seat itself lets you sink in to enjoy the ride. The other really important thing to remember is the fact that the GLC is very easy to get in and out of which is very helpful if you have an older passenger using the rear seats all the time. In fact, we think that this is one of the most accessible cabins for customers who are chauffer driven.

The GLC will be the first Mercedes vehicle in India to get the 300-spec petrol engine. The GLC300 gets a 2.0-litre, 4-cylinder, turbocharged petrol engine that makes 245PS of peak power and 370Nm of peak torque. Of course, the engine is mated to the new 9-speed automatic dual-clutch gearbox and the 4MATIC all-wheel-drive setup. And all this technology means that the GLC300 can sprint from 0-100kmph in 6.5 seconds and on to a top speed of over 220kmph. And every time you mash the pedal to the floor in Sports+ mode, the GLC does lunge ahead with a force and a sense of urgency that we haven’t seen in a standard non-AMG Mercedes for a long time. There is no lag, no sense of delay, just a surge of power with a great sounding engine note as a bonus. Considering the fact that the GLC is coming at a time where a large chunk of urban India could move to petrol engines due to a ban on large capacity diesel engines, Mercedes-Benz has got the timing on giving a desirable engine perfectly right.

Talking about the diesel engine though, the GLC gets the same 220d engine that you get in the C-Class. The GLC220d is a 2.2-litre, 4-cylinder, turbocharged diesel motor that makes a sedated 170PS of peak power but 400Nm of peak torque making it extremely easy to drive in all conditions. It is slower than the petrol on paper with a 0-100kmph time of 8.3-seconds and a top speed of 210kmph and does feel slightly underpowered on the road too as it weighs 1954kg! Mercedes-Benz does have a more powerful 250d spec engine and we bet that it will make its way into the GLC along with a less powerful GLC200 petrol in the near future.

Most people who buy the GLC will enjoy it from the rear seat so let us talk about ride comfort first. The GLC is comfortable and takes bumps and uneven roads really well in comfort mode. If you want comfort and driving pleasure both at the same time though, you do have to switch to Sport, which stiffens everything up and makes it more nimble and yet comfortable enough for your parents or grandparents to enjoy. Sport+ on the other hand makes the car really handle to the most of its capacity but does make the ride harsher and a tad bit uncomfortable at the rear.

The GLC however does make the most use of its all-wheel-drive setup and there is enough grip to rip the road right off its foundation. Even in the wet, the GLC holds the road really well which in turn really makes you feel comfortable driving fast. Steering feedback is good but there is just a hint of understeer when you really throw it into a tight corner at high speeds, but then that is a typically all-wheel-drive chassis trait. Brakes are great and work really well on both slow conditions and much faster highway conditions but do lack the sense of feedback that you get in the likes of the C-Class.

There honestly aren’t enough flaws in the GLC for us to harp about, apart from the fact that the diesel could be a little more powerful and a little more refined. It looks really good, has a very very well made and well equipped interior, and is comfortable. The GLC essentially makes its own case by being the right car at the right time for both the SUV-loving Indian audience and Mercedes-Benz, who themselves are finally closing a big gap that existed in their SUV portfolio. Of course, you could choose from competition like the Audi Q5 and the BMW X3, but since both the cars are due for a major generation change and major upgrades, it would be pointless to consider them in their current form. In simpler terms, the GLC takes over the C-Class’ position and in our opinion is the best all-round car that you can buy for about Rs 50 lakh in India today.

Dislikes: Not as aggressive as most other SUVs, underpowered and slightly unrefined diesel engine, no Apple CarPlay/Android Auto.