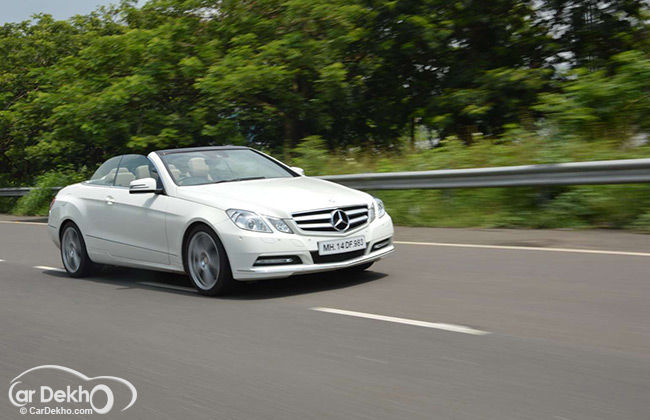 Indians also love convertibles like other countries in the world. But, the question arises, if it is good for our dusty weather? The answer is a big NO, also the fact that it doesn’t justify to drive in with an open-top in this heat. But still, convertibles are lovely to drive once the sun has set. Hence, it is one of the favourites of many to own and drive a convertible. We drive, the entry-level convertible from the three-pointed star, the E-Class Cabriolet. We drive the Mercedes-Benz E-Class Cabriolet.

The E-Class Cabriolet gets the fascia of the E-Class, however it is based on the platform of the C-Class. The quadrilateral shaped twin-headlamps are at a more slant angle than the E-Class, and the grille gets the large central star.

The sculpted bonnet and the daytime running LEDs add more oomph factor to the snout. There is no difference between the E-Coupe and Carbiolet, except for the convertible rooftop.

Looking at the silhouette, the first thing that comes your mind is the long bonnet, the missing B-pillar, the chrome beltline and sharp crease-line, and all these make the E-Coupe look a very contemporary design.

The rear end of the cabriolet has a similar charm like the front end; the LED rear tail lamps extending to the sidewalls, the very coupe-like steep C-pillar and the twin oval exhausts. The rear is the same like the E-Class.

The interiors of the E-Cabriolet are top-notch, just like any other Mercedes-Benz and the all the instrument panel bits are a direct pick from the E-Class. The instrument binnacle gets the three dials, while a screen and numpad and other controls layout on the centre console. The only difference is that the gear stick is on the floor than on the steering column.

The front seats are large and comfortable, with well-bolstered leather. The three-spoke steering wheel has 12 buttons on it and the car comes with six-CD changer and bluetooth connectivity.

The COMAND also comes as a standard feature on the E-Cabriolet. Despite being a two-door, there is sufficient space at the second row in the E Cabriolet.

The boot is also large enough to gobble luggage for 2 people for a weekend. The overall build quality is like any other German vehicle, as the door shuts with a thud.

The E-Cabriolet comes with only petrol variant, which is the 3.5-litre V6 mill. This is the same powertrain that also powers the E350 and the E Coupe. The engine transfers all the 272 horse to the rear wheel through a 7G-TRONIC transmission. It produces a grunt of 350Nm and the same engine in Europe gets a stratified fuel injection system for better performance.

The refinement of the engine is prodigious as the engine is hardly audible, while it is idling. The power delivery is also linear, and the power is good for a V6. The top speed of the E Cabriolet is electronically locked at 250 km/hr.

The 7G TRONIC transmission is almost standard across most of the Mercedes-Benz vehicles, except for the new B-Class that gets a dual-clutch 7-speed self-shifting box. The shifts are a bit lethargic and it does feel that the transmission does blunt the engine’s performance to a certain extent. The transmission can be shifted to comfort and sport mode. It has better response in the sport mode.

Mercedes-Benz vehicles are always known for its supple ride quality and the E Cabriolet is no different. It irons out most of the bumps and the jolts. The ride quality is smooth and composed at low and even high speeds.

The car delivers comfortable ride quality without jarring or feeling overly stiff, and this really is important since the car is a quick mile muncher, albeit far more stylish than it’s saloon sibling.

People buy convertibles for the joy of it, especially in India. Being a luxury coupe, this won’t be the buyer’s first car. Hence, for those looking a soft-top convertible the E Cabriolet is the only option in this price segment. The other soft-top versions are expensive than this.

The E-Cabriolet is a practical enough convertible as it has good driving dynamics, sufficient space and first-rate quality interiors.