The undisputed champion of the entry-level hatchback segment goes through a mid-life make over. Are the changes significant enough for it to withstand the onslaught from the newer breed of hatches? Let’s find out. 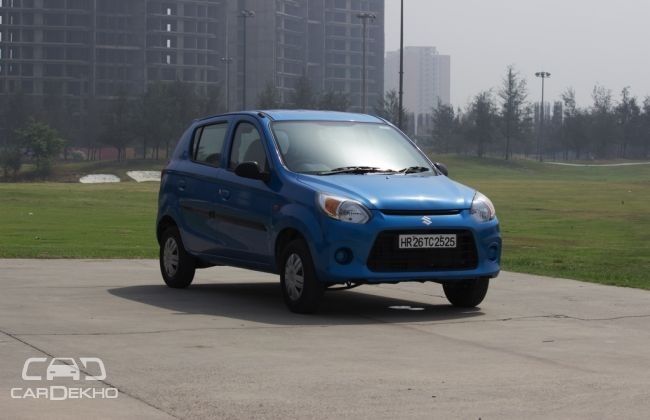 There are some cars that define brands. The biggest example for Maruti Suzuki is the 800. In fact, it was so much of a brand-defining model that the peppy little hatchback was often referred to as just ‘The Maruti’. The Alto was launched in the year 2000 and soon began to catch on to the Maruti 800 in terms of monthly sales. It was only obvious then that when the Maruti 800 was finally phased out, the 800 nomenclature got attached to the Alto and thus was born the Alto 800 in 2012. Irrespective of how popular a car is in India, everything needs a refresh once every few years. And with the next-gen version expected only by 2018, the company has decided to give it a mid-life makeover. So, what's changed? That's what we are about to find out.

The front is where you find the most dominant changes to the design. Instead of the thin chrome grille with a body coloured slat, you now get a chunky piece of plastic that flows neatly between the headlamps and an inverted airdam below it courtesy the new bumper. The car also looks wider due to the update up front. There are other minute changes for which one would have to look really close. For example, the headlamps now have an amber-coloured housing for the turn indicators and you also get fog lamps that were not present in the previous version. But, this it is not standard and is only available on the top of the line variant. What you now do get as standard is the left side ORVM.

Move to the side and what you see is exactly the same straight shoulder line with no drama, which is a good thing if you are looking at a simple, no-nonsense design in a car. The rear has the same tail lamp housing as the outgoing version with the similar bulge curving near the centre on each side of the Suzuki logo. The bumper between both versions is the same and gets space for the registration number plate in an inverted U-shape cutout of the bumper.

Overall, the exterior has some tweaks but, they are not big enough to notice. You would have to be a fanatic and look really close to notice the changes. On the whole, it is still a simple, no-nonsense design.

Not much has changed on the inside. What you get is a fresh new fabric design on the door panels and new upholstery for the seats. The three-spoke steering wheel still feels chunky to hold, but does not house audio controls. Plastic feel on the dash is slightly improved but still not at par with the competition in this segment. What is really interesting though, are the backrest of the front seats, which have been neatly carved out to accommodate more space. They also provide enough bolstering and comfort for daily runabouts. But, long hauls, particularly for tall people would be a problem due to lack of under-thigh support.

The rear is decently spaced and can accommodate two adults comfortably. Again, if like me you stand over six-feet tall, you would pray for the journey to get over soon as there is no knee room and very little head room. The front, on the other hand, has reasonable headroom and legroom for people with average height.

The boot space is the same as the earlier version at 177 litres and accommodates one large bag and two small ones. That's satisfactory for a small family but not good enough to fill in large suitcases when your relatives turn up for a vacation. You would have the option of either seating them or filling up the car with luggage as the Alto 800 does not offer 60:40 split seating. It would have been a good option if the entire segment would provide this as an option (probably for the occasional lugging around).

Coming to the infotainment system, there is a single-din unit that can be connected through local radio stations, USB or AUX inputs deliver a decent sound quality through two speakers up front. But that’s not really my grouse. In today's day and age where almost every car across segments offers Bluetooth connectivity, the Alto 800 does not. Pulling over to the side of the road every time I need to answer a phone call just doesn’t cut it anymore! And the infotainment unit has to be purchased for lower versions and is a part of the package in the top-end trim.

Overall, while the Alto 800’s interior offers a bit of everything, it still skimps on some basic features that are present in the competition. One point lost for that, Maruti!

Another aspect where the Alto 800 could have been better! Then again, no other car in this segment has this aspect properly covered. With the ever-increasing number of vehicles on road, safety features are now all the more important factor.

So, it is best that this hatchback (or any other in its segment) should be best left to city runabouts where speeds are moderate. There are crumple zones that help in reducing occupant injury, but airbags throughout should become a mandate soon across all segments and variants (It does have an optional driver airbag though). Yes, there will be a bump in the price tag, but is it not worth the money?

For information sake, the VXi version we tested had a driver airbag.

Like the pre-facelift version, the Alto 800 is powered by the existing (and one of the longest existing ones) 796cc motor that is mated to a 5-speed manual gearbox. Power and torque figures remain the same at 47PS and 69Nm respectively. While these figures may not really seem impressive, what one tends to overlook is the relatively light weight of this hatchback. And in that sense, the car does not feel underpowered at all.

In fact, torque is available from a really low rev-range that makes it a breeze to trot around town and even keep speeds up to 90kmph without unnerving the car. Talking about high-speed road-noise, once the car crosses the 60kmph mark, there is considerable tyre noise from the stock setup and post 70kmph, wind noise also starts to creep in.

Overall, the proven engine continues to be a refined unit with brilliant low and mid-range to trot around town but limited high-end torque which is something you would anyway not need.

This is another department that scores a huge plus from our side. The ride is pretty planted and there is minimal body roll while negotiating tight corners as compared to the competition. There is a bit of understeer but nothing to complain about. The Alto 800 keeps its composure, unlike its competition in the segment.

What you also notice is the way this little hatch tackles bad roads. Passengers or the driver have very little jerks felt inside the cabin. Sure, on really poor stretches the car will undulate a lot, but it being a monocoque chassis like all its rivals, there is nothing much you can do about. That said, the pliant ride and good handling characteristics like its predecessor are very good and keep the Alto 800 well-planted over all roads.

So, the Alto 800 is an age-old design that has minor tweaks, some new goodies, a few changes to the fabric and decals, but there is nothing striking about it. That said, there are a number of reasons why I would buy the Alto 800. Those being the huge brand following, dealership network, reasonable and easy-to-find spare parts.

If you are the one who would not want to experiment (not stating that other cars in this segment are any bad in any of the aforementioned aspects but they have a lot of challenges to overcome) with fresh brands, the Alto 800 is the car you should buy.