Anand Mahindra, at the launch of the TUV3OO, said that he was in love with the car and wanted to be the first owner of the new Mahindra. He also said he loved people who were authentic and were true to their roots - and I respect that opinion. If there’s been one mainstream manufacturer who’s stuck to their roots - it has to be Mahindra & Mahindra. The auto-giant insists that it is a ‘listening company’. A company that listens to feedback - not just from the customers, but also us auto-journos. That is an extremely re-assuring to know that there’s a manufacturer that actively develops products, not just looking at the bottom line but with a view to cater to a specific audience.

Who is this specific audience, you ask? Well, Mahindra describes him as ‘Veer Singh’. Someone who is bold, macho and has a bring it on attitude to life. But Mr. Veer Singh here needs something to reflect his machismo albeit at a price that doesn’t pinch his macho wallet. The TUV3OO is placed in the Compact UV segment. A segment that has seen a significant increase in sales compared to the passenger vehicle segment. This very segment includes cars like the Duster, EcoSport, Terrano and also the recently launched S-Cross and Creta. Mahindra has gone all guns blazing against already established players. Does it manage to impress? Or is it just another re-packaged Quanto? Read on… 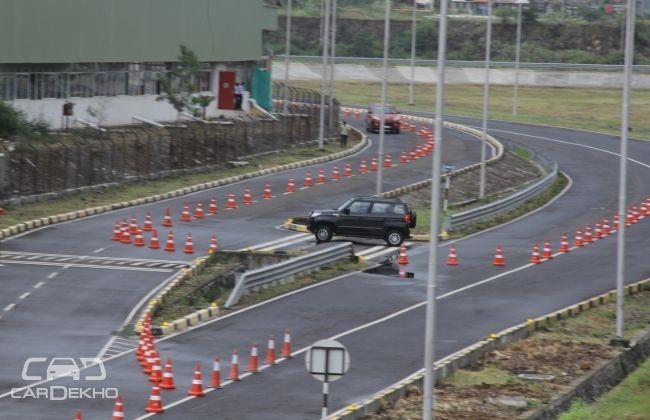 I’ll start off by saying that one needs to definitely view the TUV3OO in flesh (or metal) before they form opinions on how the vehicle looks. Pictures do not convey proportions and size of the car too well, in my opinion.

The front is aggressive, but only just. The large grille with chrome accents take centre stage and are flanked by sharp looking sweptback headlamps. I think it could’ve done with a nice set of projector headlamps and DRLs - it would have properly distinguished it from the bland breed. The bumper gets some straight lines along the length to break the bulk and a rectangular airdam. Foglamps are one size small too, it’s effectiveness remains to be tested. The grille as well as the airdam have a hexagonal mesh, something that reminded me of the first generation XUV5OO.

The side shows off the battle tank inspired design rather well. The sloping A-pillar and the strong character line running from headlamp to tail-lamp does drive the design language home. Blacked out B and D pillars and the roof-rails are a neat touch as well. The side-step runs along the body and looks like it is built to take abuse. The wheels are pushed to the extremes a fair bit, which is evident by the 2680mm wheelbase. The TUV makes full use of the sub 4-metre exemptions - it is 3995mm long. The TUV3OO can’t be termed gigantic or monstrous in anyway, the Scorpio and the XUV still reserve those tags. The tallish stance on the Mahindra does highlight the pseudo-beefy proportions on the car very well. However, those 15-inch wheels look utterly lost in the process. It definitely needs a better set - both better looking and a more fulfilling size.

The rear is slightly bland compared to the rest of the car. The highlight is definitely the tail-mounted spare wheel which is a straight lift from the Quanto. The taillamps carry a modest design. No motifs on this one like the XUV - just a simple design that works.The rear bumper is plain jane as well, housing just the reflectors, the sensors for the parking assist and a step to get inside the cabin.

Speaking of getting inside the cabin, you cannot enter the TUV without using the side-step. It sits 184mm off the ground and that is made abundantly evident by the driving position. The driver’s seat can be adjusted for height, angle and reach. Even at the lowest height, the view outside the large windscreen is nothing short of commanding. The front seats have armrests as well - although they are positioned slightly lower than I would’ve preferred. The seats are upholstered in some good quality fabric and get dark inserts for a break from the beige.

Beige is the dominant color on the insides of the TUV. There’s plenty of beige on the dash and the doors. The dashboard is a slab of black plastic sandwiched between beige portions at the top and the bottom. The beige on the top side of the dash might not have been the best idea since it does tend to reflect on the windscreen. Although quality could’ve been better, the TUV does not leave room for serious complaints.

The centre console gets a hexagonal shape with a dull silver surround, and may remind you of the S-Cross at first glance. It houses an infotainment system that gets Bluetooth, USB and AUX inputs. The controls for the audio and the calls are on the steering wheel - the switches themselves come from the XUV’s parts bin. Audio quality is just about average for casual listening, you’d have to look at upgrades if you’re an audiophile.

Just below the centre console, sit the controls for the AC. Not even the top-spec TUV gets automatic climate control. Old school knobs for the temperature and fan speed controls look ever so slightly out of place. However, the AC itself is a proper chiller. The TUV does not get rear ac, neither on the roof nor on the floor. It could really use the extra vents, the rear half of the cabin does take a little time to get cold.

The steering wheel has a really clean design. The black coloration and the dull silver accent on the steering wheel go very well with the top-half of the dash. The instrument cluster is a twin-pod unit - with the left pod housing the tachometer and the right pod being home to the speedo. An MID takes center stage and displays the fuel level, temperature, ODO and others like trip distance and distance to empty. The MID has an orange backlight that goes really well with the orange on the 2DIN music system.

The rear bench can accommodate three people and that has to be amongst it’s main USPs. The floor hump isn’t as obtrusive, which lets the third passenger sit all the more comfortably. The headroom is MEGA, while the legspace is just about adequate for a six-footer like me, sitting behind my own driving position. The rear bench misses out on a central armrest and rear AC vents. Although, it does get a charging socket for the phone.

Talking about the 3rd row, I’m glad Mahindra calls the TUV3OO a ‘5+2’ and not a 7 seater. The last row gets two jump seats which can be folded away when not needed. With both seats folded up, the bootspace is a respectable 324 litres. Folding the second row of seats away gets you 720 litres of luggage space. What is key to note is that the loading lip is quite large and the boot sits quite high off the ground as well.

Designed with inputs from Pininfarina, the interiors on the TUV are definitely well laid out. The color combination is lively and the storage spaces are aplenty as well. Overall, the interior does not exactly feel as premium as the Ecosport but it does feel well put together.

The TUV3OO draws power from the mHawk80 engine. The mHawk80 is a 1.5 litre, 3 cylinder unit that churns out 84bhp with the manual transmission and 81bhp with the AMT. Maximum torque is rated at 230Nm, all of which is sent to the rear wheels. Maximum torque is rated at 230Nm. We drove the manual version for quite a while to get a grip on how the engine performs.

Once you get on to the driver’s seat and set up the position, you’d notice a couple of things. The gear lever is obnoxiously tall. You will never have to make an attempt to reach it. Secondly, the clutch travel is on the longer side. While it wasn’t much of an issue for us while trotting around Mahindra’s testing facility, it might be a small hiccup in bumper to bumper traffic. Once you acquaint yourself with the surroundings and turn the key, the 1.5 litre motor comes to life with a distinct 3 cylinder buzz. While the engine feels relatively refined on idle, the noise and vibrations do filter inside the cabin once the revvs rise.

All of the 230Nm of torque comes in at as low as 1500rpm - the TUV has excellent low-end grunt. You can leave it in one gear higher and it won’t croak or curse. I tried a still start in 2nd gear and it did so without letting any stutters. The mid-range is quite punchy as well. You can set your foot down hard on the A pedal, in 3rd gear at close to 2500 rpm and it will pull cleanly, no two ways about it. While, it isn’t supposed to be a speed machine, the TUV does clock triple digits reasonably quickly. Even past 100km/h the Mahindra feels composed and well-mannered. It does look like one of those compact SUVs that can chug down highways if need be.

The steering is light enough to take a quick U-turn and is decently weighted once you step on the gas. Feedback from the steering is good too, you would get used to the dynamics very quickly. The suspension is softly sprung and it does soak in bumps well. While the thuds do get transferred to the cabin, it isn’t as bad to be a bother. The TUV does suffer badly from understeer when shoved into a corner though. Also, there’s a significant amount of body roll and pitch. Twisties aren’t exactly the TUV’s forte by any measure.

What we really need to appreciate however, is Mahindra’s approach to safety. Dual airbags along with ABS and EBD is available across trim levels. Although it is optional on the T4 and T6 (variants called T4+ and T6+), the underlying sentiment has to be applauded.

It isn’t a driver’s delight, but, the TUV isn’t really a non-performer. The claimed mileage on the TUV is a respectable 18.49km/l. Mahindra has employed it’s MicroHybrid Technology along with an ECO mode to extract maximum miles per litre. With great efficiency and neutral dynamics, it does just enough to keep the driver and the wallet happy.

Does Mahindra have another winner on it’s hands? It does. What the TUV has managed to do, is break away from the boring MPV image of the Quanto and in essence the Xylo and position itself as a tough and rugged SUV. The core focus areas for the TUV3OO were safety, efficiency and emissions - and it delivers on all three counts. With prices ranging from Rs. 6.9 lakh for the base T4 to Rs. 9.12 lakh for the top spec T8 with the optional AMT, the TUV gives maximum muscle for the buck.