Mahindra Thar CRDe - As Rugged As You Can Imagine

Mahindra is getting back to what it does best, building best off roaders. Presenting the Thar, the latest off roading champ from Mahindra, we take the Mahindra Thar CRDe to its home territory and try to torture it to see if it is a real true blue off roader. Read on to know the real Thar.

People who do serious off-roading would be well aware that Mahindra makes the best off roading machines and the Mahindra Thar CRDe is one of the best lean mean off roader from the Mahindra pedigree in recent times. Simplistic exteriors remind you of the good old Mahindra 540 Jeep that is an iconic SUV of all time. The Thar has a very muscular looking typical style with a big chrome bull bar in the front with 2 Hella fog lamps placed on them, the round head lamps have black grill on them to protect the glass from stones or splinters that might hit them during off roading. A large MM540 like bonnet with a flat front grill can be seen here. The typical Jeep like fenders have a plastic extension to safe guard it from rocks, water or slush. 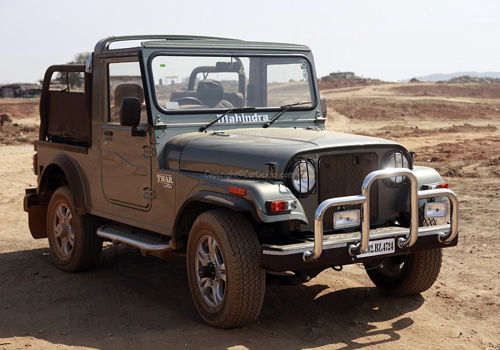 16 incher alloy wheels with P235/70 R16 tubeless tyres make the Mahindra Thar CRDe look smart from every angle. Now the Thar we drove came in the topless form but it comes with a half soft top canopy that covers the front 2 seats as standard. The roof has a roll over bar that is practical and also makes the Thar look super macho from any angle you look at it. A neat touch to the sides is the foot board that is also in chrome.

The rear of the Mahindra Thar CRDe has the 540 looks too with the rectangular tail lamps and round reflectors placed on the bumpers. The stepney is fitted on the rear door and helps in giving the rear end a very stylish and rugged feel. The Thar is a two door SUV with a third door at the rear. The front doors open very wide, making the entry and exit in to the Thar very comfortable.

A very basic interior greets you on the Mahindra Thar CRDe. The dash board is basic but all the needed tell tale warning lights are present along with the speedometer and RPM meters.

Heater is standard on the Thar but Mahindra says that the vehicle is ready to fit an AC unit on if one desires. The dash board quality is basic and the build quality is Okay if not bad but remember this is not a plush 4X4 20 lakh SUV. The gear shifter is a typical MM540 type and there is also the 4x4 Borg Warner manual shifter that the hardcore off roaders will appreciate over the rotary ones. Front adjustable buckets seats are comfortable while at the back you have two foldable bench seats facing each other making the Thar an eight seater.

Power steering is standard on the CRDe version and so is the 4wheel drive. The front wind screen cannot be folded down as it is welded to the door frame but a hinge is seen on the frame of the wind shield so folding it down may be a possibility if one feels the need to. Cost has been kept low and things like a manual window that needs to be rolled up manually and the switch gear which don’t feel that great but do their duty.

Seating on the front seats is comfortable but sitting on the rear seat is more fun. When you sit in the Mahindra Thar CRDe, you have a very different feel initially as you don’t have a roof above your head. Over all build quality is basic but does its duty to the core. Seating is comfortable for seven and we tried loading more than seven, twelve passengers to be precise.

The Mahindra Thar CRDe is powered by a NEF Turbocharged Intercooled 2498cc CRDI engine that makes 104Bhp and has 247Nm of brute torque at as low as 1800 rpm that is mated to an 5 speed manual gearbox.

What is interesting in the Thar's specs is that the cubic capacity and the bore / stroke of the NEF engine block are the same as that to the XD3P ie 2498 cc and 94 / 90 mm. However let us tell you that nothing more than this is smilar to the XD3P.The Mahindra Thar CRDe and the XD3P are both very different. The Thar's common-rail diesel is smooth and silent even when you are sitting in the open cabin though a little engine noise is audible inside the cabin despite the lack of sound damping under the bonnet. Over regular city and highway driving, the engine is barely audible to the driver. The Thar is one of the very few open vehicles that you can have a conversation in, comfortably and without shouting.

Jeeps are supposed to be slow, noisy and rough but drive the Mahindra Thar CRDe and you will change your perspective. The Thar has the perfect balance of all.  Handling the Thar is a breeze, the driver's seating position which is a birds eye position helps the handling in a big way. Power steering also aids the overall handling abilities on this brute machine. We touched 140kmph easily on the Mahindra Thar CRDe and the engine felt calm and relaxed at all time.

The gear shifting is typical Jeep style ie slightly hard to shift and that is what it should be but you get used to the shift patern very quickly and it is a breeze once you get the knack of it. The Thar is a good and comfortable handler on the highways and city roads but its real colors are seen on the off roads. We drove the Mahindra Thar CRDe to a hill that is unapproachable to any other SUV and the Thar climbed it with a big grin.

The 200mm of ground clearance and 2430mm wheelbase of the Thar helped it surf over rocks and uneven land easily and not even once did the underbody touch the surface. The two speed 4x4 Borg Warner transfer is super fun during off roading and makes you realize what real off roading is all about. Thar also boasts of a very tight turning radius of 5.25 meters that also aids it during off roading. Auto hub lock is flawless on the toughest of terrains. While the front axle has a load capacity of 1100kg and the rear has a load capacity of 1700kg.

The 60 litres fuel tank should easily take you in Mahindra Thar CRDe between cities. Efficiency figures of atleast 13kmpl to the best of 15kmpl make it a very efficient SUV as well. The braking on the Thar is managed by 113mm discs on the front and 279mm drums on the rear, you don’t have ABS or EBD etc on the Thar but then that’s what this vehicle is all about, pure and simple fun.

Independent front suspension with torsion bar on the front and good old leaf springs at the rear give a very good suspension ability to the Mahindra Thar CRDe and also aid the vehicle during tricky situations while off roading. An approach angle of 46 degrees and departure angle of 30 degrees are the USP of the Thar and its trump card while on off roads.

The Thar is a very simple and cleverly made off roader that would be very cheap to maintain as there is nothing much that can go wrong in the first case. If you have been always looking to own an retro Jeep but feared its maintenance and fuel efficiency the Thar is your dream come true. With a very refined and efficient CRDI engine you need not worry about its maintenance and mileage figures. The Mahindra Thar CRDe has a solid combination of engine, gearbox & chassis all combined in one good package. With loads of power & torque for effortless highway cruising combined with a very drivable engine that has zero turbo-lag make light work of driving in the city.

Prices for the Mahindra Thar CRDe start at as low as Rs. 6.28 lakhs Ex showroom for the CRDe 4 wheel drive while the entry level Thar with 2 Wheel drive version sporting a Di engine starts at Rs. 4.33 lakhs making it a very irresistible package for all you Jeep fans.