Soon after the first fuel stop, the Sonet went to meet Ashish Raorane. Yes, the ace rallyist who is heading to the Dakar as a privateer. And that meant going into the wilderness. 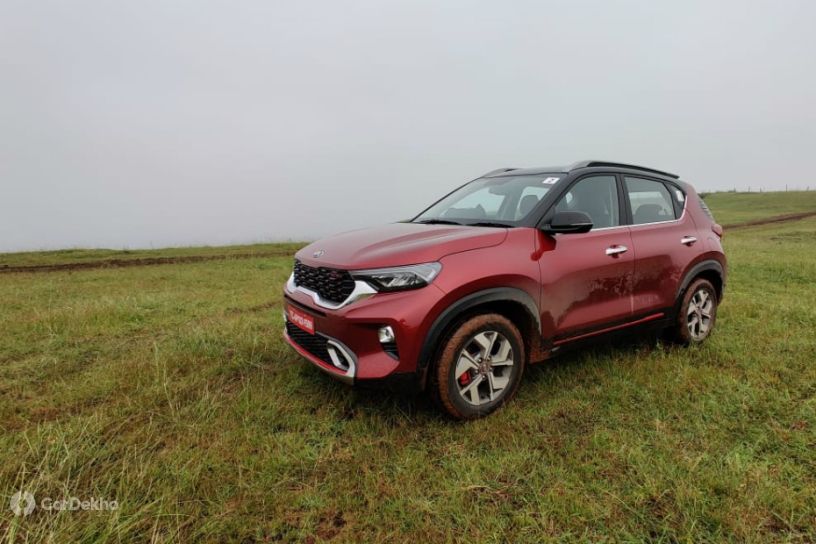 The long term test for the Sonet truly started at the first tank-up. With about 30km of range indicated on the trip computer I pulled into the first Shell pump to treat the Sonet to a tankful of unleaded. The Kia swallowed about 40 litres at the first auto cut-off, and would have taken a couple of more litres if we were ready to brim it up to the top slowly. The trip computer showed an estimated range of over 600km, which should be easily doable.

The 90km that I have travelled since, the indicated fuel efficiency has hovered around the 12.1kmpl mark. This number should go higher, because soon after the fuel stop the Sonet went to meet Ashish Raorane. Yes, the ace rallyist who is heading to the Dakar as a privateer. This brave and resilient Indian was in the middle of a training session, so our directions led us down a narrow road, which rapidly broke down into a rocky path, before turning into tyre tracks cutting through waist-high grass.

The front sensors were buzzing non stop because of the grass and I could hear them slender and tall stems plinking off the front bumper, then folding and letting us pass over. Not being able to see what was up ahead meant hidden rocks or ditches could catch us by surprise and because of this we were treading slowly uphill. This situation was made all the more tricky because the ground was slushy and wet, courtesy of a thunderstorm the previous night.

At a couple of points I had to come to a halt to check the road ahead, but, surprisingly, starting off on these slippery slopes didn’t have me begging for a clutch. The iMT judged the clutch bite perfectly and will make driving in such conditions much easier for most people as chances of stalling the car are zero. The traction control also helped us get ahead by allowing the right amount of wheelspin to dig through the mud and grass, cutting in only when the job was done. The undulations in the rutted path didn’t slow down the Sonet either; with 205mm of ground clearance, it clambered in and around what came our way.

Surely, this wasn’t a hardcore off-road test, but when the Kia makes its way over the crest and through the grass the silent surprise we got on the people’s faces said a lot. The Sonet found itself to be in the company of a Scorpio, a Fortuner and a V-Cross there. Not bad, huh.

After saying goodbye to Ashish, the Sonet clambered down with just as much ease, but I was distinctly more confident this time around and could think about unnecessary things: Why can’t drive modes or traction modes (available with the diesel AT) be integrated with the iMT? Over the broken sections I noticed that the plushness of the suspension helped us carry a bit more speed than expected. At the same time, it didn’t feel sloppy when we hit the highway to get back home.

Once home I spent some time with the owner’s manual to look for some much-needed solution. A key hack that every Sonet owner would want is to silence the horn at the time of locking or unlocking. The horn is loud enough to wake up the neighbourhood! The solution is simple: press the lock and the unlock button on the key fob simultaneously for four seconds. Release the buttons when the hazard lights flash. And it’s done! Now I’ll no longer feel worried about waking up the neighbours when starting off at 5am for a shoot!

We are going to test the Sonet’s iMT to see how it fares over the thousands of kilometres that it will traverse during its time with us. But if you have any questions or suggestions do let us know in the comments below so that we can test it out for you.