Does the motoring Icon from the United States live up to its reputation as one of the greatest off-road vehicles? We find out! 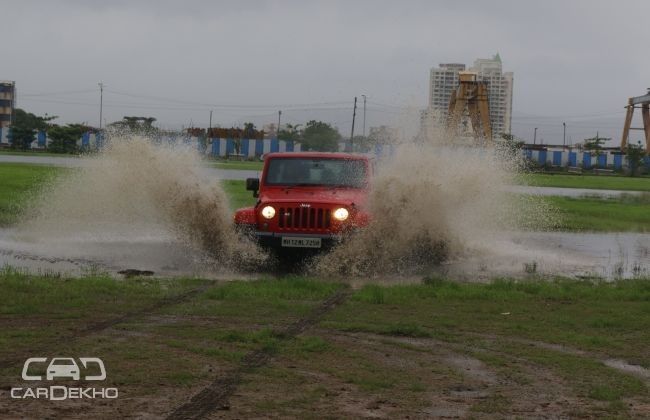 There are cars and then there are icons. The car we have driven here is very possibly the definition of what a motoring icon is. In India, every big SUV is called a ‘Jeep’ and that is for a reason. Back in the 60s, 70s and 80s, when Jeep was being built by the then Mahindra and Mahindra, it was one of the biggest, baddest and coolest vehicle you could get for a reasonable sum of money. And although they never drove well, you could take the roof off and make it a convertible, keep the roof on and fill it with a dozen people and still pull up to the Willingdon Club in the evening wearing your imported Ray-Ban glasses and Levi’s jeans and be the coolest person around. Of course, Jeep’s joint venture with Mahindra ended in 1985, but now, in 2016, 31 years later, they are back! And back with this – the uber iconic Jeep Wrangler Unlimited.

The Jeep Wrangler Unlimited is essentially the 4-door version of the iconic 2-door car. But a country like India prefers something that is a big more practical which is why Jeep has decided to launch this instead. From the outset, we think India should get both the two-door and the four-door version, but that is a discussion for another day. So, lets start with the way this gigantic car looks. Does it really need an introduction? Of course not. The iconic seven-slat grille pretty much announces what you are driving and the inset headlamps make the fascia look slightly modern. The large plastic bumper makes the Jeep Wrangler look even wider than it already is. This, incidentally, is what the updated Thar (which was launched last year) is based on. You also get a set of WIDE fenders both in the front and in the back and a set of simple five-spoke 17-inch alloy wheels.

Move around the side and the simplicity of the design continues. Mind you, this car has essentially remained unchanged for over a decade now and still continues to be a good looker! The roof section is made out of plastic and you can actually remove certain sections of the roof or unbolt the whole rood panel itself (if you have a place to store it). You could also go outright extreme and take the doors off and if it wasn’t raining in Mumbai, we would have done exactly that!

Around the back, the Jeep Wrangler is one of the last few SUVs in the world that continues to have the spare wheel still mounted on the tail gate. The tailgate itself is a two-piece unit where the gate and spare tyre swing outwards and the rear windscreen swivels up. Combined with the chunky tail lamps, the Wrangler’s backside is as pretty (yet simple) as everything else on the car. On the whole though, the Wrangler is certainly not one of the prettiest SUVs around, but definitely manages to capture the hearts and minds of everyone it passes on the road, especially in this bright shade of red.

The simplicity continues on the inside. Well, to be honest, we really wonder why the interior of the Jeep Wrangler looks like it is from the last decade, but spend a day off-roading in this beast and you will know why you need simplicity over a tech overload here. For starters you get a small touchscreen infotainment system that we think could really do with a serious upgrade, and that’s about it. There is no real creature comfort from 2016 in here, just a set of knobs to control the AC/heater controls and some steering mounted controls for your phone and audio. But what you do get is an interior that is best suited to take on every terrain possible. Look closely and you will see a concealed rollcage all around the car and seats that can be washed off with a hose.

Move slightly lower to the bottom half and you see two levers. One, of course, is the gear selector lever and the other is the one that shifts the Wrangler into four-wheel-drive with a big clunk. Now, I am the kind of person who prefers mechanical efficiency and assurance of a lever that takes some muscle to change over a button that engages four-wheel-drive and that is exactly what the Wrangler has. You have the option of keeping the car in two-wheel drive or choosing four-wheel drive high or four-wheel drive low range. The latter puts the Wrangler into a class of its own off the road and there are few SUVs in the world that can match its capabilities to muscle over obstacles like they were a set of small potholes on Mumbai’s suburban roads.

The power to do all of this comes from a 2.8-litre, four-cylinder engine that makes 200PS of peak power and 460Nm of peak torque. That said, you can’t really feel the power and the torque on the road as the Wrangler weights a massive 2200kgs! It gets to triple digit speeds briskly but the front end does tend to get lighter as you get faster and faster. The gearbox too feels a little slower and is as last generation as everything else on the car. But again, the Wrangler is not meant to be a triple-digit speed machine that devours kilometres on the highway but better suited to doing two roles: a boulevard cruiser or a thoroughbred off-roader. And trust us, the Wrangler does both jobs extremely well!

There are a few things that American cars excel at. One of them is sheer ride quality and the Jeep Wrangler is no different. It might not take corners with a certain degree of confidence or have the handling finesse that the likes of the Jeep Grand Cherokee or any other SUV of its size gives, but show it a set of rough roads or a set of crater sized potholes and the Jeep will swallow it up with ease. And so we come back to its off-roading capabilities. As we mentioned earlier, everything in the Wrangler is manually operated (although it does have electronic traction control and hill descent/ascent control) and everything literally feels military grade! Articulation between the front and rear axles is genuinely astonishing and although we tried really hard to cock up a wheel to take a dramatic shot, the Wrangler remained as planted as a 100-year old banyan tree. When launched, the Wrangler will truly be one of the best off-road cars in the country in its stock form.

So why should you buy one? Well, it might cost somewhere around the Rs 50 lakh mark so it might be extremely heavy on the wallet but this is not a car you buy with you head. Buying the Wrangler is an emotional decision. There is nothing, and we repeat ‘NOTHING’ at this price point that has the same ‘Get out of my way’ road presence that the Wrangler has, and nothing in the price bracket which is as capable as this is off the road. The other huge advantage of buying one is the fact that since it has been in production for a while now, the sheer number of aftermarket parts you can get for it is as long as the car itself. So, again, should you buy one? As your primary car, probably not. But as the ultimate weekend toy? Absolutely and in the same red that we have here!