The diesel 4x4 Jeep Compass exceeded our expectations. We now spend a few days with the more city-focused Compass, the petrol 4x2, to find out if it checks all the right boxes 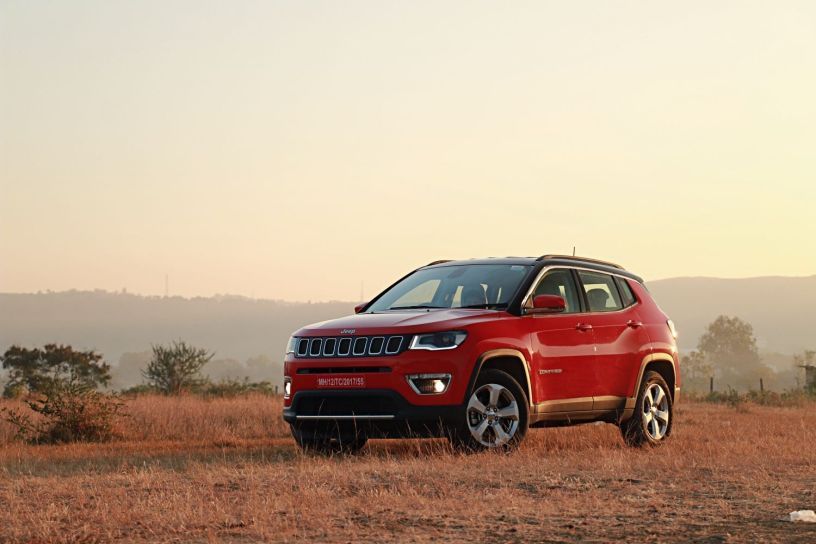 The Jeep Compass Petrol automatic can be had in the base Sport and the top end Limited variant, but it’s only the Limited which gets the automatic transmission. This means it gets all the features which were there in the diesel Compass we tested a few weeks ago. But, there are a few subtle differences. First, the petrol automatic gets 17-inch alloy wheels from the lower Longitude variant, but with a slightly different satin paint finish. However, in our opinion, the wheels on the diesel looked better. Further, the absence of the Selec-Terrain four-wheel drive mode knob has opened up some storage space inside the cabin for a phone, which was a big miss in the diesel. Also, you only get two airbags here, which is a let down as the diesel 4x4 had 6. You can check out the other bits and features in the Jeep Compass Diesel 4x4 review.

This Compass is powered by a 1.4-litre turbocharged engine which is mated to a dual-clutch 7-speed automatic transmission. This is the same engine that was available earlier in the Fiat Linea 125 S, which was the most powerful petrol sedan in its segment. Now, to power the bigger and heavier Compass, this engine has been further tuned to make 163PS. And you can really feel it, but not in the conventional sense. Though this sounds exciting, most of it is busy hauling around the 1.5-tonne SUV.

The Compass petrol automatic is completely at home in the urban environment giving you an effortless driving experience in the city. The 1.4 petrol delivers power in a clean and linear way across the rev range despite being turbocharged and that’s a pleasant surprise for an engine tuned to make this much power. The turbo has been almost perfectly integrated with the motor and kicks in at around 2000rpm, with no noticeable turbo lag. It isn’t the most refined turbo-petrol engine we have driven though, and some engine noise and vibrations become apparent beyond 3000rpm but then stay manageable all the way up to the 6000rpm redline.

In our performance tests, the 100kmph sprint from naught was dispatched in 9.67 seconds, which is impressive, and it’s actually quicker than the diesel (10.03 seconds). But the engine doesn't really reward you with any drama and it actually doesn’t feel as fast as the numbers suggest. This is really down to the linear nature in which the petrol delivers power and feels much nicer cruising along at a more sedate pace.

The 7-speed DCT moves up and down the gears in a smooth, fuss-free manner. In the city, it shifts up at around 2,500 rpm while driving at an ideal pace, with upshifts happening at around 3,700 rpm as you start to get your foot down. Also, while overtaking, the gearbox holds engine revs till you finally start to reduce throttle input and then upshifts, giving you the confidence to make an overtaking manoeuvre .For the most parts, it delivers a straightforward experience, as expected of a dual-clutch transmission. It’s only when you try to give it pace in the city, the gearbox feels slightly confused by holding the gear at first but then deciding to up/downshift depending on the throttle input. And since this shift is slow, you end up not gathering the required momentum. Kickdowns also take a considerable amount of time to happen.

So all good, right? Not quite… To tow this SUV in this manner, the engine ends up being a fuel guzzler. In our tests, the Compass only managed a fuel efficiency figure of 6.1kmpl in the city and 8.5kmpl on the highway. And it's mostly down to the fact that in the city, the engine doesn't upshift below 2000rpm. And this, continuously running at a high rpm, takes a toll on the efficiency. Also, to get a quick move on the highways, the gearbox is quick to jump down to 5th or 6th gear and takes time to settle back into the top gear. And while this keeps things smooth on the highway, it brings down the efficiency number.

Like the diesel, the Compass petrol also features Koni’s Frequency Selective Damping which, in theory, offers different settings for high speed and low speed comfort. This should provide good ride quality at city speeds and better stability at highway speeds. But, on the petrol, the setting seemed still a bit on the stiffer side, so you do feel most of the bumps and imperfections on the road. What’s nice though is the sound dampening in the Jeep and this means that while you can feel the road, you don't have to hear it and even large speedbrakers and potholes are dispatched silently. One plus point we found on our shoot was that with four oversized adults and a boot full of camera equipment, the ride quality improved in the city.

On the highways, the steering of the Compass weighs up well and really gives you a good sense of control. Here, the stiff suspension keeps the SUV planted on the tarmac, with high speed turns not affecting the composure of the cabin. Even on twisting hill roads, the Compass’ suspension lets you have fun by allowing you to chuck it into corners as it still holds a nice tight line.

Being a front-wheel drive SUV, it does suffer from considerable torque steer. This is especially noticeable while powering out of corners when the turbo begins to spool and the 250Nm of torque starts to push against the steering. It’s not something you would encounter during regular driving, but it’s still noteworthy.

The Jeep Compass is good looking. It's got ample features, feels plush, has a lot of usable space -- and the best part is, it feels like a properly strong and well built SUV.  For an asking price of Rs 20.5 lakh, maybe Jeep could have considered adding on features like six airbags (standard in the 4x4 Limited)  and maybe thrown in some features like auto day/night IRVMs, electric seats and cruise control, all features that are present in their global models.

If you are in the market for an automatic SUV, you should also consider the Tata Hexa, Hyundai Tucson, Toyota Innova and the and the Mahindra XUV500, all falling inside the price bracket of Rs 15-21 lakhs.

What the petrol-automatic does is make the Compass a great city dweller. At a sedate pace, it’s very comfortable and even its mild tantrums when you’re trying to hustle it along are easy to get used to. One big thing working against it is its low fuel efficiency, which remains in the single digits no matter how you drive. So you really have to ask yourself if the convenience of an automatic is worth the price of its rather bad drinking habit. But, if you are willing to ignore that, the build quality and the luxury experience offered by the Compass is worth your consideration.