The i10 began a new phase in Hyundai global innings giving them a boost not just to set a new trend, but also an improvement in their market share and even the customer’s image of the brand changed drastically. In India, the i10 and even the i20 were runaway success products. Then the next thing that worked in Hyundai’s favour is that fact that the Fluidic Design got well accepted and the company was able to displace best sellers in the C+ and D segment. The design philosophy got Hyundai a market share in the segment, where even Maruti Suzuki has failed to capture. The Baleno, SX4, Grand Vitara and the Kizashi have gone down the drain for the company. 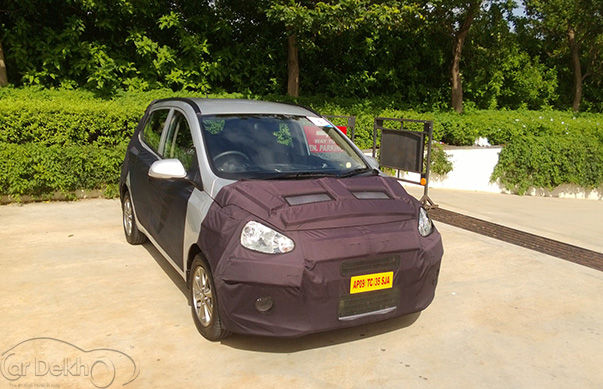 With more than half a decade later, Hyundai is ready to introduce the second-generation i10 in the European market, while India gets a special version that has been tweaked for Indian market. Several specfications have been changed and more focus has been implemented on the Indian consumer demands. We get the Grand i10 for a short spin. Dig in further as we share the story of the new upcoming Grand i10.

The Hyundai Grand i10 has been engineered for the Indian market needs. The design of the Grand i10 is a meld of subtle and style. Hyundai is targeting car buyers between the i10 and the i20 with the Grand i10. The Grand i10 has some designing cues from the Fluidic language. This design is unmistakably a Hyundai, with the narrow front grille and headlamps that somewhat resemble the Fluidic i20.

The side profile of the vehicle makes it look a lot different and the first thought is that the vehicle is practical and it has good space. The Indian version has a larger greenhouse area to make the cabin feel airy. It gets roof rails and even the rear is stylish. The diamond cut alloy wheels also look stylish and add some appeal to it.

The interiors of the Grand i10 are stylish and it gets the same i10 like gear-knob that is mounted on the dashboard. The quality of the plastics is good. Hyundai has maintained its reputation of having good quality plastic, be it on the Eon or even the Sonata. The Grand i10 comes loaded with several features like in-dash music system, steering mounted audio controls and even Bluetooth connectivity.

The designers at Hyundai have given the interiors beige and black dual tone. The Grand i10 has been designed keeping the Indian consumer in mind. Hence, the vehicle has spacious and airy interiors. The Grand i10 has roomy interiors and a spacious large boot. There is also a segment first, rear AC vents that makes it’s easier to cool the cabin. The other features on the Grand i10 include rear parking sensor, smart key with push start and stop button, glove box cooling, electrically folding ORVMs, dual airbags and even ABS.

The Korean manufacturer hasn’t disclosed the powertrain specifications, but we assume it will produce somewhere in 70-75bhp as this is a short-stroke diesel engine. The torque however will be lesser, due to its design. This is a three-pot diesel engine and it revs up to 4500rpm. The pressure of the injection is fairly high, that is one reason why the engine is so quiet while idling. The NVH levels of this engine are fairly low and you can mistake it for a petrol engine, this is due to the refinement of the engine and also the insulation used by Hyundai in the fire compartment.

The power delivery from this oil burner is linear and the good bit is that the power produced by this engine in the lower revs is good for the engine to pull in city traffic. This means the vehicle is highly drivable even when lugged into a higher gear. Above 3500rpm, the engine just revs without producing much power. Being a short-stroke the power produced is lesser at high rpm. This oil burner comes mated to a five-speed manual transmission. The gear ratios are short for the initial four cogs as this improves the drivability in city and the vehicle has been designed for more of city driving. The engine easily clocks 120km/hr, however post that it does take its own time. Hyundai claims that the Grand i10 will have the best fuel efficiency in this segment.

Most of the Hyundai’s have been soft, but the Grand i10 sits in between. Its suspension is tweaked for plush ride. Most of our driving was on smooth roads, hence we cannot get into the complete details about the behaviour of the vehicle at this point of time. Do read our in-depth review of the Grand i10, sometime in September.

The handling is also decent, even though there is roll when you push it to the limit.  But as we mentioned the vehicle has been designed for city driving and so is the gearing. Its good enough for city driving, however the steering feels is a bit vague. Not that we expected it to have a feel like a sports car, but it is definitely an improvement over the existing extremely light ones seen on the Eon and the i20.

The Hyundai Grand i10 will be on sale sometime in Diwali. The hatchback strikes a balance between styling, practicality and efficiency. The 1.1-litre diesel has sufficient power and even the bells and whistles and space on offer is good for five people. Hyundai has a winner in its hand as the Grand i10 ticks all the correct boxes. Now, all depends on how well Hyundai prices the car. They have always been aggressive and we expect them to continue with the same.