The launch of the facelift Ford Endeavour happened last year just after Toyota launched the Fortuner. Off late Automatics is the way to. We have automatic transmission cars in every segment and the trend is quickly catching on.  Our man Ritesh Madhok traveled to Goa to drive the Endeavour’s latest incarnation the 4X2 Automatic to bring you this report on what to expect from the Urban SUV. Heading out to Goa to begin my drive in the all new 4X2 Ford Endeavour Automatic had me thinking how this new version meant for the tarmac would really perform on the sandy beaches and roads of Goa. The first thing that hit me about the Ford Endeavour Automatic was how the mighty beast would perform running on 2 wheel drive mated to a 5 speed auto box. After having driven the other versions of the Endeavour numerous times before I must confess that this SUV has a lot of road presence and demands respect where ever it goes. The ride quality is good in the front and the centre rows but at the rear most the ride quality isn’t at its best due to the leaf spring suspension that the Ford Endeavour Automatic rear tyres are mounted on. One other reason for the ride quality is the high floor and huge tyres. The seats are comfortable enough but slight lack of thigh support is evident and the upright posture of the rear seat does make it difficult for long journeys. Apart from that, the Ford Endeavour Automatic has been an able machine and a delight to drive that’s powered by a very able 3.0 TDCi unit. The Endeavour we get here are built from CKDs. 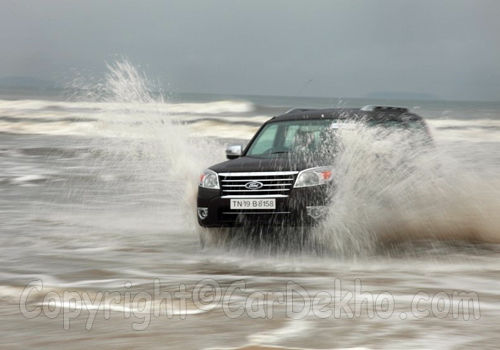 The drive in Goa was planned in such a way that the 4X2 Ford Endeavour Automatic are driven through busy streets as well as highways and a bit of tricky hill terrains as well. We also had an off-road session and a beach drive on the last day. Enough of introduction lets get our hands dirty to tell you how the Ford Endeavour really is.

Everything remains the same on the 4X2 Ford Endeavour Automatic as on the other variants. The looks of this beast has always inspired brute power and the Endeavour clearly qualifies as a strong bully on the road and off it. The first thing that you notice about the Endeavour Automatic is the stretch back styled headlamps giving the car a very aggressive look. The grill, which has always been rather prominent on the Ford Endeavour Automatic, is an all chrome affair with ENDEAVOUR embossed prominently over it. The front has a nicely integrated bull-bar like shape on the bumper which also houses stylish fog lamps. The front end has a split look which is more in line with today's SUV design and can give the other SUVs the run for their money.

A huge bonnet and side fenders compliment the image of this SUV. The sides of the Ford Endeavour Automatic looks proportionately designed going about the huge dynamics. Large doors that open and close with a SUV like thud, entry and egress is a pleasure. One another thing that is delight is the door cladding which does help in breaking the monotone of the large doors this cladding or door guard is painted the same color as the vehicle, the cladding adds that desired element to give the vehicle a more finished look which also gels well with the over fender cladding to give the Ford Endeavour Automatic robust stance.

The rear of the Everest the 'telephone' tail lights as Ford calls it. The rear lights are still fitted on the rear pillar and the brake light is in the shape of a telephone, therefore the name.

The turn indicators are housed in the OVRMs that are electrically foldable and this beast of a SUV drives on huge 16 inch alloys, which further enhance the Ford Endeavour Automatic masculine stance.

Considering the macho exterior, the interiors of the Ford Endeavour Automatic also holds its self well. The two tone interior looks bright and makes the cabin look large which is already large by default. The squarish dashboard and round air con are carried forward from the older generation Endeavour. The materials look and feel good and quality is up market but the soft rubbery dash material would have been more than welcome. The seats are all in leather and the overall finish of the interior did look more up market. Drivers side seat adjust is sorely missed. Seat quality is good and the cushioning is adequate. The steering has height adjust but none for reach. Audio controls on the steering are also suspiciously missing. In terms of equipment levels, the Ford Endeavour Automatic does have an in-dash 6 CD/MP3 changer that plays the MP3 and FM radio channels. Sound quality is good thanks to the large cabin area which helps in bouncing of the sound waves.

The icing on the cake is the touch screen audio/video player with built in GPS system with Bluetooth connectivity which isn’t the part of the standard equipment list but can be fitted as an accessory at the dealership. There also is a roof mounted foldable screen to watch movies when you are seated in the middle or the third row. Air conditioner is of the manual type and we would have liked a climate control to come in. Never the less cooling is instant aided by the middle row and rear row A/C vents that are roof mounted and have a 4 speed blower for them. Interior quality is good and the plastics used look and feel just well. Leg room and head room is abundant and we should not talk much about that as the Ford Endeavour Automatic has loads of them. Entry to the third row is by folding the middle row seats using the tumble down method via a knob on the seat. As mentioned the 3rd row seating is not the most comfortable and is more of a make shift seat but if you have kids then that is the best seat they going to choose. This seat can also be removed to make way for a largish boot whenever needed. The boot door opens sideways and is large enough to swallow in a full sized bicycle.

Now lets get to the main technical section for the Ford Endeavour Automatic. To power this beast is the same 3.0litre TDCI Diesel engine, technically speaking the 2953cc engine is equipped with a Variable Geometry Turbocharger (VGT) to brighten things further. This engine develops a healthy 156PS @ 3200 rpm and in process belts out a meaty 380Nm of torque. It is this healthy torque figures that the Endeavour’s real strength lies in. Now the 3.0 Liter propels further in a very sedate manner. The engine roar is very evident but isn’t harsh or rough in sound. The Auto transmission is a 5-speed affair. The Auto changer knob is the same as that on the 4x4 also equipped with an overdrive button on it. Gear ratios on the AT are long on the 1st, 2nd and the 3rd gears cause it has to pull a big beast that’s nearly 2 ton in weight.

Gear shifts can be felt but not very disturbing. The best thing on the Ford Endeavour Automatic is the invincible like feel when you are in the driver’s seat. Steering response is sharp and the turning radius is excellent for a vehicle this big in length and width. We were more than pleased with the Ford Endeavour Automatic ability to handle the narrow Goa lanes and crowded junctions. We also took them on to a Ferry across the sea to cross a stretch, and boy it was a sure sight that no one would miss, 5 Endeavour on a ferry across the Goa Sea.

The steering of Ford Endeavour Automatic feels lively and the ride quality isn’t bad either. Suspension is on the harder side but then it was always meant to be like this on a SUV. The rear leaf springs don’t spoil the party on the first 2 rows so let’s leave it like this. The brakes are good but we would have liked an all wheel disc setup on this SUV. ABS and EBD help bring this 2 tonner to a halt in a very sedate manner. In-cabin NVH levels are quiet silent except for the engine roar that adds to the aggressiveness of the Ford Endeavour Automatic drive. Dual air bags in the front are part of the standard equipment list on the 2x4.

We found the 2x4 a bit quicker than the 4x4, the reason being the lesser weight of the vehicle. Corners and turns are well dealt with by this SUV and never ever does it show any signs of fright when going through the twists.

I had my doubts on the rear leaf spring suspension at the first but as the drive around Goa progressed my negative thoughts about the leaf springs all vanished because the Ford Endeavour Automatic rear end behaved very sanely Fuel efficiency figures according to ARAI are of 10.7kmpl on this 2 tonner which is not bad for the sheer size and comfort you get driving around in it.

Let me sum up what the Ford Endeavour Automatic really has to offer. The Endeavour has always been regarded as a very trusted SUV in the 4x4 market. Now with Ford getting a 4x2 variant of the Endeavour it should help bring in buyers who want a large SUV but don’t want to spend the extra for the 4x4 that they never would be using in daily. The efficiency figures are also on the better side and there is no wait period on this SUV as there on its competitors. Build quality and fit and finish is good, remember this is a CKD build. The bottom line is that at 18.69 lakh ex showroom Delhi for the 4x2 Automatic the Ford Endeavour now really is quiet a tempting preposition for a buyer who wants a good SUV for Urban usage.