When Audi had announced that it would be bringing the Q3 SUV to India, the news created a spur among Mini SUV buyers and Audi fans alike. The Audi Q3 is on the brink of its launch here in India. The Audi Q3 or Type 8U as it was internally known was launched internationally in 2011. 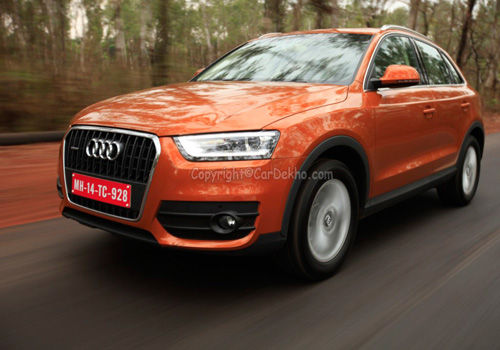 The Audi Q3 when launched in India would be the smallest SUV member to the Q family that includes the Q5 and the Q7 currently. Being a member of the Volkswagen family the baby SUV Audi Q3 shares the Volkswagen Tiguan and the SEAT Tribu small SUVs platform.

The Audi Q3 would be a direct competition to its arch rival-BMW X1 and indirectly to many other SUVs in the price segment that include the Toyota Fortuner, Renault Koleos, Nissan X Trail, Chevrolet Captiva, Mitsubishi Outlander and Pajero and the Honda CRV. We drove the latest Mini SUV from Audi the Q3 across some wonderful and very scenic landscapes of Goa to bring you this comprehensive road test of the Baby Q. Read on the know what lies under the skin of the Audi Q3.

First look of the Audi Q3 and you instantly notice that this has to the Audi Q5, second look and you notice a slightly smaller dimension than the Q5 but not by much. The Audi Q3 has a wheelbase of 2603mm as opposed to 2803mm on the Audi Q3.

On the design front, the Q3 appears typically Audi, the front is unmistakably Audi with the French beard grill that has chrome surround linings and Quattro monogram placed on the black checks mesh. The front bumper has a very smooth and soft feel to it. The bumper houses two round fog lamps and headlight washers on it. Just like the Q5 and the Q7 the Audi Q3 also gets the sharp angular headlamps.

These headlamps have daytime running lights that are uniquely designed and have a very attractive ornamental look even while driving during daytime. These headlamps also house the turn lights that are placed in the headlamp assembly along with the bi-Xenon headlamps. We are told by Audi officials that these LED headlamps just consume 10 watts and have a very long life. You also get an option of adaptive lights on the Audi Q3. The Bonnet has smooth flowing lines that go backwards giving a clean look to the front.

The sides of the Audi Q3 are more like a coupe mostly due to its flowing roofline. The roofline has a gentle slope downwards that finally mates with the rear windshield. The side profile of the Audi Q3 has muscular flowing lines on the doors all along the waistline and one on the lower part of the door just above the foot board that defines its SUV robustness.

The doors are wide and the glass area is large. There are chrome inserts all across the blacked out window frames. The roof also gets a brushed metal roof trail and a huge panoramic sun/moon roof and not forgetting the fish tail radio antenna that is also body colored and just looks very neat. The wheel arches have black plastic mouldings on them that continue right across the footboard and join the front and rear bumpers. The Audi Q3 has body coloured wing mirrors with integrated LED turn lamps in them.

The rear of the Audi Q3 is largely symbolised by large wrap round tail lamps that are shaped just like the Q5 and the Q7. The tail lamps also are LED types and have the sharp cut design like the headlamps. The large tail lamps make the Q3 appear wider when seen from the rear.

The rear bumper is also typical Q style, large and rounded. The lower part is in black while there are large stop lamp strips which also have the reverse light just above the black body guard of the bumper. The Audi Q3 comes with twin chrome exhaust pipes that enhance the sportiness of its rear profile.

The rear windshield is at a neat angle that is in line with the sloping rear boot area. A large Audi rings logo in chrome signifies its genes. The boot lid on the Audi Q3 has a 3 dimensional look due to the soft bulges on it and also has a lip spoiler with integrated stop lamp.

The Audi Q3 drives on wide Goodyear Excellence tyres of 235/55 R17 specs mounted on five multi spoke alloy wheels that look very sporty. The Audi Q3 excels in the exterior designing and detailing department. The Audi Q3 looks robust yet elegant and has all the underpinnings of an SUV. It has the typical Q family looks and the build quality is unmistakably Audi – Flawless.

Step inside the Audi Q3 and you feel you are entering the Q5. First thing you notice is the ease of entry and egress with large and wide doors. The cabin is in dark and light beige combination. The upper part of the dashboard is in dark shade made of soft rubber material. The instrument cluster is very finely laid out.

The speedo panel is large and very clearly set. On the left you have the RPM meter and the speedo on the right. The middle you have the multi-function display. The speedo dials have a thin chrome lining around them with digits in while backlit and red needle making it a classy affair. The steering a typical Audi four spoke design that is leather wrapped.

You have all the multi-function buttons needed laid out on the steering which include the audio control, Bluetooth phone control and the MFD toggle button. The center dash houses a 6.5inches color display that can be folded back in the dash when not needed. This display works as the infotainment system and also doubles up for the MMI unit as its display.

Just underneath this display is the AC vents that have chrome surrounds. Under the vents is the Audi Multimedia single CD/MP3 unit with Radio. You get two SD card slots under the CD. Under the SD card slots is the main audio control unit. The Audi Q3 comes with a dual zone climate control system with vents on the dash and also a blower vent for the rear passengers placed between the front seats.

The switches and knobs on the Audi Q3 are made of highest quality and look and feel like lasting a lifelong. Theses a wooden insert on the passenger side of the dashboard with Quattro logo placed on it that reminds you that you are driving a Audi Quattro SUV. The lower half of the dash is in beige color.

The dash of wood continues around the gear shifter and also on the door pads. Wood finish in the cabin makes and feels rich and enhances the overall cabin value. The Automatic Gear shifter has a round knob with leather wrapping and a touch of brush metal on it with S-tronic boldly written on it.

The Audi Q3 gets all white LED interior lighting that includes the roof lamps and reading lights. We sorely miss the auto dimming mirror on the Audi Q3 instead of the manual dimming mirror that could have been avoided. You get full leather upholstery on the Audi Q3. The light beige colored seats make the cabin look bright and extra roomy. The driver and front passenger seats get all electrical settings for height, reach and backrest incline.

The front seats are perfectly contoured and the cushioning is just right offering high comfort level. The adjustable center arm rest has the iPod port hidden inside it along with some storage space. The rear seats also offer a near perfect comfort level of seating and come with three height adjustable headrests. A foldable centre armrest is sorely missed but we are told that the armrest did not make it so that extra space could be made for the fifth passenger sitting in the middle of the rear seat.

Bottle holders and can holders along with storage bins are seen on the door pads. Rear Leg room and head room is very good on the front and the rear seating. A large SUV like feel can be felt when seated in the Q3’s cabin.

Slide open the electric sun/moon roof and wallah you get the extra light in and also fresh breeze and also a different drive feel. The boot of the Audi Q3 is large enough to fill in three large suitcases in the 460 liters boot area. Audi Q3 is the smallest SUV from the Q family; still Audi has not cut down on the feature list and the Q3 comes with a long list equipment list similar to the Q5 and the Q7.

The Audi Q3 is available 2.0liter Petrol TFSI engine and a 2.0Liter TDi Diesel unit. The 2.0liter Diesel unit will be initially seen in India. The Audi Q3 powered by a 2.0 Liter (1968cc) inline four cylinder diesel engine with VGT turbocharger and direct injection. This 2.0liter TDi engine makes 174bhp @ 4200RPM and has a mammoth torque of 380Nm between 1750 and 2500 RPM. The Q3 gets its transmission in the face of the 7speed S –tronic dual clutch automatic gearbox with tiptronic (Manual shifts) with electrohydraulic control.

The 2.0liter engine is the same unit that also does duty on the VW Passat currently being from the same VW family. The 174bhp engine ensures that power is always available at tap and the Audi Q3 is at ease at all possible speeds. The light Steering feels chunky to grip and the feedback is responsive.

The Double Clutch transmission shifts gear rather unknowingly and there is no gear change lag felt. The gear ratios on this 7 speed transmission are short for pumping out best possible performance and high fuel economy. The short overhangs and body design ensures there is minimal body roll and the drive feel is sharp and crisp. The driving position is good with a bird’s eye view from the driver’s seat. The top speed for the Audi Q3 is 212kmph and we touched 180kmph with ease.

The Audi Q3 feels very stable at high speeds which are typical Audi virtues. The Audi Q3 drives on a soft suspension setup which is rather medially soft. The bad roads are well absorbed and the drive feel is very comfortable. We also took the Audi Q3 to a off road track and as you can see in the pics the Q3 aided with the renowned Quattro (4Wheel Drive) performed perfectly well as an off roading SUV. Audi has 30 years of Quattro experience and it does show in the baby Q3 SUV during off roading.

The Mini SUV market in India is growing rapidly and the Audi Q3 is all set to create benchmark in it. The Q3 has a long feature list that is at par with the Audi Q5 or the Q7 so there is no cost cutting evident. The 2.0 TDi engine is one hell of a brute performer.

The Q3 does just fine on the road and off it and comes out shining in all departments.  The Audi Q3 is a perfect example of Audi’s true capability and virtues. We expect the Audi Q3 to be priced between the 30-32lakh price barrier when launched in late May and are very sure that it will be a clear winner among the existing rivals.