The Volvo XC40 is the only BS6-compliant entry-level luxury SUV in the market right now. That aside, has it got enough to take on the Germans? 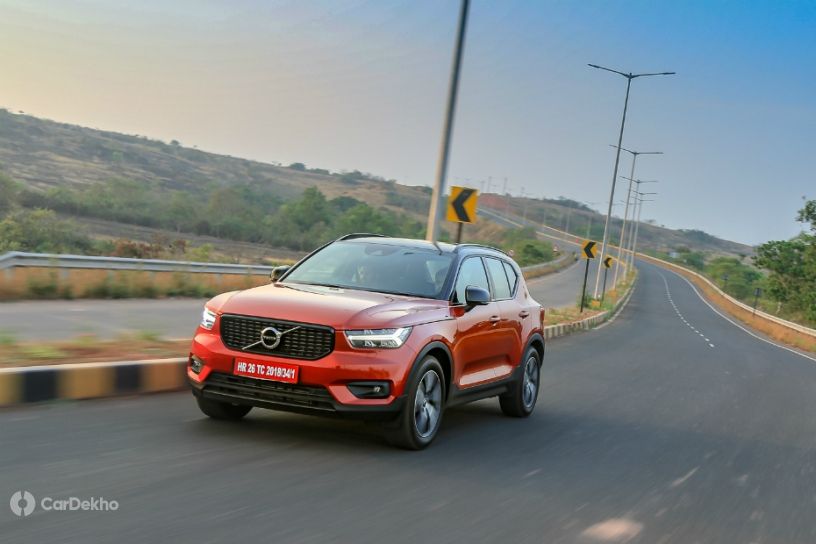 Volvo forayed into the entry-level luxury SUV space with the XC40 D4 diesel back in July 2018. Striking a beautiful balance between design, equipment and premiumness, the baby Volvo made a strong case amongst its rivals like the BMW X1, Audi Q3 and Mercedes-Benz GLA. Now though, the diesel has bid farewell to make way for a BS6-compliant 2.0-litre turbocharged petrol engine. We find out if the XC40 with a heart transplant can take off from where the diesel left. And also, can it still stand its ground against the German?

This is one area where the XC40 definitely stands ground. In fact, it marks its own territory. We think it is the the best-looking SUV of the bunch thanks to its proportionate and distinctive design. Boxy dimensions (4425mm long, 1863mm wide and 1652mm tall) and Volvo-esque elements such as the Thor’s Hammer LED DRLs, hexagon studded grille and the large vertical tail lamps further add to its charm.

The flat bonnet, front-end, black cladding, 18-inch wheels and concave surfaces on the lower side of the doors, all come together to give it a muscular appearance. It is the right size, not too large nor too small. This makes it stand out in the segment as the rest look more like crossovers. The class leading 210mm ground clearance is also a contributing factor.

Viewed from the rear, the XC40 looks youthful and bold at the same time. Highlights include the spoiler, cladding on the bumpers and twin chrome exhaust tips.

Overall, the XC40 is undoubtedly the right choice if road presence and aesthetics are high on your list.

Straight away, you will notice two major changes to the cabin in comparison to the previously available XC40 R-Design diesel. The contrasting orange shade for the carpets and the door pads has been replaced with black and the seats are now covered in Nappa leather instead of Alcantara. We were fans of both, by the way.

The youthful character of the XC40’s exterior has been duly carried into the cabin. The slim, vertical air con vents and the 9-inch portrait-oriented touchscreen are the first things that you’ll notice. The cabin follows a nice and quirky approach, evident from the mix and match of rectangular and round elements.

Despite black being prominently used, the cabin avoids feeling stuffy by allowing a considerable amount of light in through the panoramic sunroof and the large glass areas. Quality of materials and the overall fit and finish levels throughout the cabin remain impressive. All the touchpoints like the switches feel well-built, especially the rotary knobs on the aircon vents, the central knob for volume and the inside door handle that exude premiumness. We found the cabin to be well insulated and overall, it is a great place to be in, further accentuated by the subtle ambient lighting.

The amount of space inside the cabin, both at the front and the rear is adequate -- you’ll never feel wanting for more. The front seats offer good underhigh support courtesy of the manually extendable under thigh support. Both front seats come with electric adjustment and adjustable lumbar support but you don't get the heated front and rear seats anymore.

The rear seat experience isn't as comfortable as the front. For starters, the cushion is a bit firm. Also, a short seat base means it lacks under thigh support and the seat backrest angle is a bit too upright. Furthermore, ferrying three adults at the rear on a long journey will not be a pleasant experience as the cabin is not wide enough. On the flipside, you get ample knee room, headroom, an armrest with cup holders and obviously that huge panoramic sunroof.

As it is only available in a single R-Design variant, Volvo has loaded the XC40 with features. For instance, it gets a 14-speaker Harman Kardon sound system that lives up to the name, a fully digital 12.3-inch instrument cluster with dedicated themes, a panoramic sunroof, wireless charger, 8-way electrically adjustable front seats and dual zone climate control AC. These features are all welcome but we miss the 360 camera and cooled seats.

The 9.0-inch vertically stacked touchscreen unit is a pleasure to use thanks to the crisp display and clean user interface. It is the right size too and a win from an ergonomic standpoint as it is slightly tilted towards the driver.

As for storage solutions, Volvo has incorporated several clever storage spaces across the cabin. The front door pockets are sufficient enough for 1-litre bottles and there is also a not-so-obvious underseat storage space for the driver. The central console features a dedicated space for your smartphone and next to the gear lever are two cup holders. You also get a dustbin in front of the central armrest storage.

The rear passengers also get cupholders in the armrest and medium-sized door pockets. Another addition is the nifty storage space on each side of the rear seats.

As expected, the XC40 comes packed with a wide range of safety tech. But what really stands out are the radar-based features. The lane-keeping assist works flawlessly, correcting the steering inputs when it detects a drift. In case you take your hands off the steering wheel, you can see the car steering itself and making sure it follows the lane. Apart from that, the XC40 will also steer back to the road if it detects you are going off the road and even brake when it detects oncoming vehicles.

There’s 460 litres of boot space in the XC40, which is right up there with the competition. The boot also gets some thoughtful additions like a foldable floor with a storage space underneath. Dig deeper and you will also find the space saver spare tyre. The rear seats come with a 60:40 split option, which further helps you increase the boot space when needed.

This is the biggest change as the baby Volvo now comes with just a BS6-compliant 2.0-litre turbocharged petrol engine in T4 tune. It produces 190PS and a healthy 300Nm of torque. Volvo has ditched the AWD system and power is now sent to the front wheels through an 8-speed automatic gearbox. The now-discontinued diesel engine was also a 2.0-litre unit with similar power figures but with more torque (400Nm).

We’ll start with refinement and yes, it is so refined that you will barely feel or hear the engine running at idle. Although it is one of the most powerful options in the segment, these figures are delivered in a linear and unhurried manner, making it an easy car to live with. The torque is available from way low down and the engine starts pulling strongly from as low as 2000rpm, making city drives and overtaking slower cars effortless. There is no surge or immediacy in the way the XC40 moves, but it is quick; just that it won’t scare or excite you when you go hard on the throttle.

Out of the four drive modes (comfort, dynamic, eco and off-road), we found the comfort to work the best as dynamic just holds on to the revs unnecessarily without upshifting, even at minimum throttle inputs. Eco is on the lazier side but still enough for urban conditions. But get on the throttle in any mode and the XC40 responds well without any noticeable lag. There is also an individual mode on offer that enables you to select the steering feedback, powertrain and braking characteristics.

The shifts are non-obtrusive, smooth and even though it is not the quickest unit out there, the 8-speed AT is still plenty quick. The engine and the gearbox works seamlessly, delivering good performance in a laid-back manner that will appeal to its target environment -- city drivers.

The ride quality definitely isn't focussed on passenger comfort but the XC40 leaves little room for complaints. In low to moderate city speeds, it filters out the road imperfections but you do have to slow down for bad patches or broken roads. The ride further improves and flattens out as the speeds rise, making things even better. Overall, we can’t say it’s balanced as there is a minor underlying firmness, but it isn’t a dealbreaker. As we mostly drove on well paved roads in Goa, we’ll reserve our final judgement on the ride quality till we get our hands on the XC40 for a thorough road test.

Around corners, the XC40 feels stable with controlled and predictable body movement. It is not a sporty handling SUV, but it doesn't feel very boring or nervous either. The only problem (apart from the exclusion of AWD system) is the steering wheel which lacks feel or feedback. Braking is also strong with good bite and pedal feel.

The XC40 T4 R-Design petrol comes across as a solid package with just the right amount of space, performance, comfort and premiumness. The little Volvo has got quite some charm and a desirability quotient to it as well thanks to the unique styling and well-appointed cabin.

Although the XC40 is the most expensive option in the segment at Rs 39.9 lakh, it packs the right qualities, features and safety tech to give its rivals every reason to worry. Furthermore, it is now more affordable than the now-discontinued diesel version. And since it is currently the only BS6-complaint entry-level luxury SUV on sale, we’d suggest you take a serious look at the XC40.