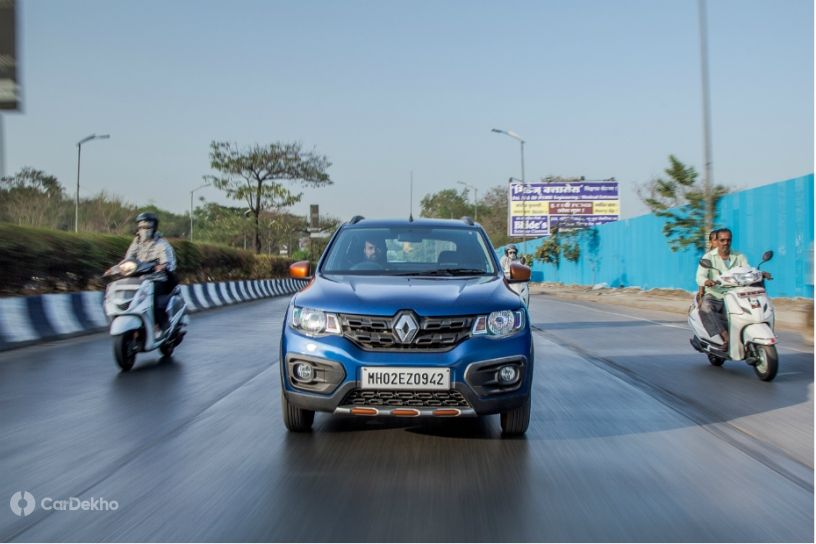 This couldn’t have come at a better time. My daily, a Maruti Suzuki S-Cross 1.6, had been becoming a chore to drive in the city - and expensive too. While the slightly larger motor and six-cogs help it return more than 18kmpl on the highway, mileage in the city drops to 13kmpl even if you don’t drive it with a heavy foot. The heavy clutch, turbo-lag and fuel-sapping slow-speed characteristic meant the 1.6 is best used for longer journeys.

The Kwid Climber now takes on the role of the city car for me. A reasonably peppy 1.0-litre, 3-cylinder petrol motor and light controls - along with the promise of better city-mileage - should make this the perfect city runabout to have.

The Renault Kwid Climber in our fleet has all the updates the hatchback was given back in August 2018. This includes a rearview camera with display on the 7-inch central touchscreen, foldable rear centre armrest, retractable 3-point seatbelts for the rear passengers and a 12V charging port for the rear cabin.

By now, most of us may be quite familiar with the Kwid, it has been in the market for over three years. The Kwid Climber variant has been on sale for over two years and it has remained unchanged in terms of exterior design since then. The SUV-inspired boxy design still sets the Kwid apart in its segment, though it may not attract as many eyeballs as it did when it was first launched. The Climber has even more SUV-ish elements, including the black inserts around the fog lamps, faux skid plates front and rear, roof rails, orange inserts on the bumper, ORVM covers and roof rails along with alloy-wheels-like full-wheels covers which give it a distinct look.

Only the keen-eyed will spot the new camera integrated neatly into the Renault logo on the boot lid of the Kwid Climber. That’s the only change on the outside.

Inside, the design remains the same. Changes are practical and mostly targeted at making life easier for the rear passengers. The retractable seatbelts are easier to operate than the manually adjustable ones available earlier - which should encourage passengers to use them more often. The addition of the centre armrest is a masterstroke; in a car that is at best a 4½ seater, the armrest makes seating quite comfortable. The armrest does not get any cup holders and that is a big miss, especially considering the Kwid does not have too many storage spaces anyway.

The new 12V outlet is placed beside the rear parcel tray, adding to the convenience factor for the rear passengers.

The most important convenience and safety-enhancing feature added to the Kwid is the display of the rearview camera on the 7-inch centre display. The video feed is reasonably clear even at night, definitely making parking the car safer.

On a short drive, the steering felt very light, darting in and out of traffic is also helped by the compact dimensions. The gearshift is fairly smooth, which is great considering the engine is not that peppy. A peaky power delivery means you keep shifting gears to keep up a good pace. At speeds up to 30kmph, the engine is not smooth - often inducing jerks as you go on or off throttle. Could this be improved with a visit to the service centre? We will find out.

I am thinking of adding a day/night IRVM to the Kwid, either from the accessories list from Renault or from the aftermarket. Night time driving would become much easier with this addition.

Over the next three months, the Kwid will be used extensively every day - the goal is to find if it is the perfect city runabout. If you have any queries or advice, please do leave your comments below.