Vintage cars are always a delight to look at, especially when they are running and well maintained. Driving around the city of Mumbai or Pune is not really a strenuous task for these old-timers but when it comes to driving to a location away from those two cities, the first question that pops up is, "Will the cars make it?" 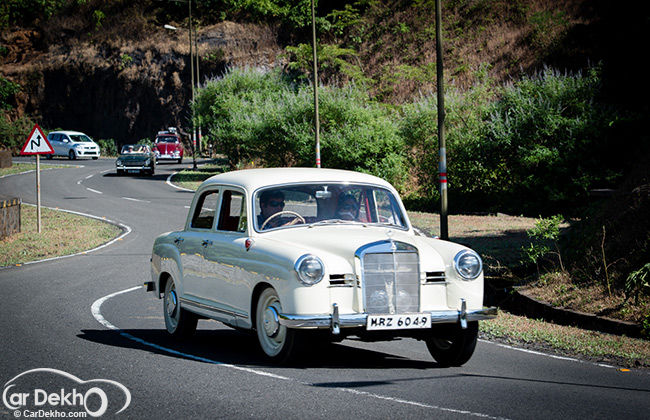 Lavasa as we know is India's first Hill Station City. Their moto is to provide a location where residents of this city can Live, Work, Learn and play in harmony with Nature. Being located about three hours from Mumbai and an hour from Pune, it was a pretty bold endeavor for the few owners that decided to start up their prized old engines and make their way up to the scenic hill city of Lavasa. Now anyone that has been to Lavasa knows how treacherous the first part of the road can be, i.e. from Chandani Chowk onwards. Pot holes and craters mark the asphalt and it is like driving through a mine field.

The road does clear up and becomes well paved about 10kms in. The corners are long, sharp and very enjoyable in no matter what car. As the road winds up to this exclusive city, the hairpin corners start becoming more steep and cars that have slightly less power find it diffucult making their way up these slopes. Yet these vintage beauties eased their way over these obstacles and made their way up to the gates of Lavasa. Some chocked during the way up but with  a little coaxing. all 12 cars made it up the ghats to Lavasa.

On reaching the top they lined up together and drove as a convoy down to the Lavasa Internation Convention Centre, profiling along the way, driving on the beautiful roads of the Hill City, putting a smile on the face of every passer by. Finally the cars lined up on the promenade by Dasve Lake to be showcased to the many visitors.

The cars that were on display were two 1959 Chevrolet Impalas, one pristinely restored where as the other still had the original paint and canvas convertible hood, a 1946 Packard Clipper, 1957 Fiat Elegant, 1959 Mercedes Benz- 180A Ponton, a 1970 Triumph Herald, which was by far my favourite, 1963 Sundeam Rapier, a 1963 VW Beetle and the rarest of all the 1934 VW Tempo also known as the original Kubelwagen. All these cars made their owners proud as they stood majestically at the lakeside, being gawked at as the sun set behind the hills. All the owners had a good time admiring each other's cars and talking about how they restored the cars and the story behind the vehicles. Actress Aditi Gowitrikar graced the occasion and went around admiring the vehicles and speaking to the owners.

The Drive was organized by the  Indian Automotive Racing Club and it allowed the owners to gather together as one, come to Lavasa and showcase their classic beauties to the car aficionados from all over. This was Lavasa's first attempt at organizing a classic car rally, which means that there is a high possibility of this event being an annual one with more participants and entries from all over India.

Lavasa has nearly completed the construction of it's first town, Dasve and has handed over the keys to nearly all of it's apartments and villas to the respective owners. The first town is more along the lines of tourism, water sport attractions, lake side cafes, something that is more open to the public.The second town, Mugaon has just been announced and construction has started in this area.

The residential areas are on sale as well and keys get handed over to the owner in two years of purchasing the apartment/villa. Mugaon is more of the business district of Lavasa city and will be home to many non-polluting industries and businesses.  Lavasa is also planning on constructing a 1.5km tunnel between Lonavala and the second town of Lavasa.

This means that access to the city will be much easier, than instead of taking the broken road from Chandani Chowk. About half an hour to 50 minutes drive from Chandni Chowk in Pune. People traveling from Mumbai or other cities on NH 4 can reach Lavasa without having to enter the Pune city. Lavasa also hosts the women's drive as a secondary motoring event open to ladies. Lets hope this pretty city becomes a great automobile hub for shows and events.