Volkswagen Beetle is one of the most recognizable cars in the world of automobile and which is also deeply ingrained in many pop cultures. Seriously, the last beetle launched in India did'nt find many takers because of its looks, but the latest version which I proudly own fixes that issue by a big margin. The original retro theme is one of the major reasons for its existence. The charming appeal is complemented by rounded bi-xenon headlamps and the 16-inch wheels. The obvious retro touches can also be seen inside where the dashboard is uprightly finished in the same colour as that of the exterior. The new beetle has been bestowed with a fresh touchscreen which gives high-resolution visuals, the thing which I liked the most. But one thing that would disappoint the most takers is the pricy tag of the vehicle that puts it into the category of Mercedes A-Class and BMW 1-series. The price could have been reasonable in my opinion. Rest, all seems perfect in the car.

3.2/5
Based on11 User reviews
Write Your Review
Beetle Reviews 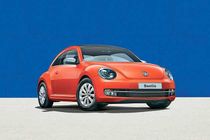