1. I bought a new tata Hexa XT in Dec17 .The following problems/ issues merit attention pl: (a) The clutch of the veh is getting struck and not getting disengaged while running.I observed this after delivery and I sent the veh to wksp and I was assured it has been
repaired .However,this situation presented again when I was on road and it was a dangerous situation.The traffic around me stopped as veh was jumping and despite my many attempts clutch was not disengaging.Now,clutch disengaged but it continued happening again and again.This is a dangerous sit wherein a third party may get injured or me and my family may face accident.Now,this a safety issue and I am not ready to compromise on safety.This happening with a new veh is not acceptable and then after reportig not sorted out and not taken seriously.Now I am forced to raise and flag the issue. (b) Secondly,the water is not getting srayed in front wipers since beginning and rain sensors also not working.I brought this to notice of company which clearly implies the standard of PDI and non professionalism.The veh was taken to wksp and the issue is still pending. (c) I have bought the veh and driving for it for a month now but I am still unaware of many features even like navigation.I have taken adequate interest and gone twice to company for same,ppl have taken intersrt tere but a clear and standard procedure in this regard is clearly lacking. 2. I was asked by dealeron 05Feb18 to give the veh for replacement of defective clutch pedal assy.I politely asked to be provided a written assurance that after replacement i will not face any problem with clutch assy as itz a safety issue.However, MD told me that they can just replace the part and cannt provide any written assurance and told me little rudely that i may go legally wherever i want as if i am on fault here when i am facing such issues within first month of purchase and also the said individual feels that probably the customer is struck and there is no legal recourse.The behaviour of such senior functionary when company is at fault is hurting. 3. However, i decided to give the veh for repair on 05feb itself and not take legal recourse as it is going to be a painful procedure for me also.The veh was delivered to me duly repaired on 06feb18 and when late in the evening i took it for drive there are unusual sounds from engine every km .The sounds are very prominent and not very pleasant.So i called up the works manager at dealer and he immediately sent a mechanic at my place.I took the veh on road with mechanic and he acknowledged that sounds are unusual and maybe coming from turbo and he said that this may be due to they not been able to fit the pipes properly.Initially the mechanic told me these are usual sound from turbo but i vouch they are not usual sounds as very loud and never heard those sounds for 2500 kms that veh has done.It only started on 06feb.Later mechanic ack that sounds are actually unusual.i spoke to works manager and he told me to send the veh again tommorrow.However i will like to submit the following: (a) This is actually becoming harassing experience of buying a new veh.Therefore,i have finally decided to go to consumer court for redressal.The court process will be long drawn and i will have to get the veh repaired and in the meantime,may i request TATA motors to let me get the veh repaired at chandigarh/mohali as i belong to that place and its just 40 km away.i have lost complete trust in metro motors both technically and behaviour wise.Conduct is far from professional.The unprofessional conduct can also be gauged from the fact that when i intially booked the veh and gave the booking amount,i gave a certain colour choice ,i was approached two days later to change the colour as BOOKED colour was not available and again i was approached few days later to change the colour third time and i changed third time.This is happening when i have given booking amount and colour changed thrice after that.This i have to bring up now as i am approaching consumer court. (b) Also,my i humbly request TATA motors to consider replacment of veh or return the money and take back the veh as court process will be long but i will not face this continous harrasment and will have to approach the court in case the veh is not replaced or taken back.Meantime when all clear is given from tata motors,i will take veh for repair of unusual sounds at chandigarh/mohali BUT i do not want any dealings with metro motors .Also, the mechanic has assured veh is safe to drive despite the unusual sounds.

Thanks a lot for the detailed review. Thought of Buying Haxa XT (After thinking too much whether to buy TATA product or not) and inquired about the same in the showroom last week. But after reading this review my impression on TATA products remains unchanged. And i am dropping my plan to buy any TATA products.

I also faced problem in hand break. It failed it's duty in Kodaikanal hill journey. No response from pondicherry dealer when contacted. Door strip also broken. No immediate spare available

I also faced problem in hand break. It failed it's duty in Kodaikanal hill journey. No response from pondicherry dealer when contacted. Door strip also broken. No immediate spare available 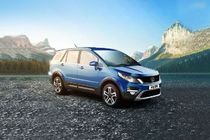