The newly launched Nissan Kicks has been gathering attention all these days. And it should be as it is a global product and launched after Nissan Terrano failed in the Indian market. The car has been carefully designed to match up to the rivals in the segment including Hyundai Creta and Renault Captur. Just 2 months back I purchased i20 Active and I am delighted that it is still the value for money deal in Rs. 10 lakh. I am not saying Kicks is a bad car but if you don't want to spend extra Rs. 4-5 lakhs and want the same set of features in another car, then go for i20 Active. In terms of looks also, I think i20 Active appears stylish and more aggressive than the Kicks. I know these cars fall in the different segment but nowadays every new compact SUV is launched, the upper segment is definitely affected. You get a whole lot of features in i20 Active such as touchscreen infotainment powered by Android Auto and Apple CarPlay and Navigation, rear view camera, cooled glove box, projector headlamps, automatic climate control, rear ac vents, engine start/stop button, 6 airbags and tons of other features. What else you need? I know it is weird to compare these two cars but honestly, if you have a tight budget of around Rs. 10 lakhs, the i20 Active seems to be more value for money deal. You do get never seen features in Kicks such as 360-degree camera and contemporary aspects such as larger 8-inch infotainment but on the downside, you only get 4 airbags, a feature which is a must if you are spending Rs. 15 lakhs. Kicks is also a good car but if you are not serious on spending Rs. 15 lakhs, Hyundai i20 Active can also offer contemporary styling and features in an Rs. 10 lakh price range. It's just my opinion.

4.3/5
Based on237 User reviews
Write Your Review
Kicks Reviews 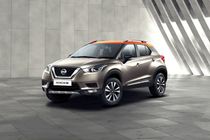