Actually this beast came to our family around 11 years back. When my father came with this beast I was a kid only and got confused whether it is a car or jeep . Its pros were that it looks rough and tough and in reality it is a tough vehicle due to its high ground clearance and can cross any types of terrains whether its normal road , off road , snowy , rainy like I am serious any kind of terrains also its powerful motor is just incredible and you can hear turbo swirl too while revving it. Once the road was full of water up to thighs and the other cars stopped but bolero just waded that water like nothing and also I would like to mention that it was affordable too as we bought that for 5.4L. But as every coin has two faces it has certain cons too like lack of features like power windows , stereo system , alloy wheels , safety features like ABS and many more . Now talking about pickup its noise was an issue but the turbo lag in this vehicle was very well contained and hence its performance was just epic as its engine was full of torque and being a rear wheel drive it was also easy twirl in cities as well as highways . The mileage was normal in cities like 12-14 Kmpl but in highways it improved to about 16-17 Kmpl. We also swapped its original seats with the seats of Mahindra Xylo hence it was well comfortable but its stock seats were mediocre and also 7 people in it were able to sit in it with at most comfort. Now talking about overall visibility for that I have a word "MINDBLOWING" as when you are on driving seat you can see the hood as well as the sides which makes it tremendous to twirl around as you don't have to care about the distance between your car and other things. Coming on to suspension my beast was equipped with independent front suspension that were McPherson Struts and leaf springs at rear so ride quality was good too that it was able to absorb any kinds of bumps in its way. Braking performance is just phenomenal as it uses a bigger size disk and calliper and drum on rear wheel. For service we used to go to Mahindra service center for its regular maintenance, if you can believe its service cost was very very low as compared to other diesel vehicles as all the parts made were indigenous and if you can find any of its parts all over India that is also on 3rd party mechanics too. So the conclusion is that if you want a vehicle that is required by you to go on any terrain and want some features that Mahindra is offering with new generation Bolero close your eyes and just opt for this beast. Even I just learned how to drive on this vehicle so I have great emotions attached to it and I have also modified it a lot. 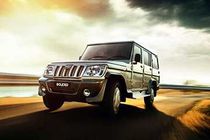