Verna -a good choice but not a perfect one

Verna -a good choice but not a perfect one

Hyundai Verna attracted handsome bookings when its new version ie Fluidic verna was launched back in 2011. Due to its up level design and completely refreshed look with featured packed up to the brim, its negativities got ignored. One of those is its extremely low ground guaranteeing bump at each and every speed breaker if filled with two or three people. Every second Verna manufactured in 2011 seen on road was without either of the fog lights or both missing, which happened due to its poor bumper durability. These were some common things in all the versions of Verna as I own both 1.4 ltr diesel and 1.6 ltr diesel. When talking about 1.6 ltr diesel Verna , its a nice car but with high power (ultimately high) as it becomes difficult to handle it after pushing gas pedal a little harder. Also, Company claims its top speed above 180 but driving it at 100 even is a great task as it feels it might take off in the air any moment. When talking about 1.4 (which any one barely bothered to buy), its a nice car too with great fuel average but lacks features as compared to 1.6 version. Interior is average. Touch screen infotainment in current version is only thing which keeps interiors average, not below average. Watching the current position of the Hyundai Verna Fluidic in the market is not so good. The company is trying hard to keep it in competition as giving a ultimate new look again, projector head lamps, diamond cut alloy wheels, touch screen infotainment with GPS & maps. But unfortunately it has loosen his grip now owing to other launches such as updated Honda City. By summing up all its only positive aspects are, its design and fuel economy. Otherwise, it failed to become a PERFECT CHOICE to win every ones' hearts. 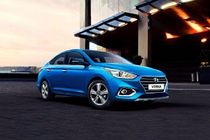