Remember the first Hyundai Tucson? You probably won't. It went away as quietly as it came and in the five years it was around, Hyundai managed to sell only a piffling 1,810 units. The Tucson was one of Hyundai's rare flops, not because most people struggled to pronounce the name right (it's not -Tuck-son! but "Too-sawn" after the city in Arizona) but because it was the right product at the wrong time and possibly at the wrong price. The Tucson, the only diesel soft-roader when it was launched in 2005, had a lot going for it, but it was up against the marginally cheaper Honda CR-V. That was also an age when customers thought it silly to pay Honda-money for a Hyundai, even if it had a diesel advantage. And back then, with petrol at Rs 40-45 litre, diesel wasn't such a big deal. Disheartened by the Tucson's failure, Hyundai didn't bother to bring in its successor, the second-generation Tucson also known as the ix35 in many markets. But now, after skipping a generation, Hyundai is all set to bring the Tucson back to India. Why the change of heart? It?s more like a change of times. A bold, confident and aggressive Hyundai is no longer on the back foot and is, in fact, making deep inroads into the upper reaches of the market which once eluded it. The timing of the Tucson's launch is also perfect. The runaway success of the Creta and the skew in demand for the more expensive variants have proved there's an appetite for premium SUVs and the Tucson is well placed to catch the spillover of customers looking for something even more premium. The Tucson also neatly fills the gap between the Santa Fe and the Creta to complete Hyundai's SUV portfolio and further cash in on the SUV craze, which is showing no signs of cooling off. And, the fantastic response at the Auto Expo was the last bit of validation Hyundai needed, to give the Tucson a green light. So, will it be second-time lucky? No doubt, it's a much more competitive landscape now with everyone and their uncle swarming in with SUVs. But interestingly, the Tucson has found a sliver of the SUV market, the Rs 17-22 lakh band, all to itself. True, SUVs like the Endeavour and Fortuner are formidable rivals but none of them are soft-roaders or as urban-centric as the Tucson and this makes it unique. The Tucson's first true direct rival will be the VW Tiguan but that's not coming until mid-2017. So, can the Tucson make the most of this free run,Compared to the first Tucson, it's hard to believe that the all-new model, launched internationally in 2015, comes from the same planet, let alone the same car company. They may be just two life cycles apart but the difference feels like light years and is a solid example of Hyundai's meteoric progress, especially in the area of design. The Tucson is unmistakably a Hyundai and wears with confidence the latest evolution of the company's "Fluidic Sculpture" design language. It's a flowing shape full of curves and strong design elements like the massive three-slat grille, stretched headlights, strong shoulder line and big wheel arches. The rear end is also very rounded and the small, sharply raked rear glass makes it look more crossover than pure SUV. The slim and long tail-lights which stretch into the tailgate look superb and typically Hyundai too. In fact, the family resemblance to both the Creta and Santa Fe is clearly there and in terms of length, it sits almost equidistant between the two. However, the Tucson looks much more like a shrunken Santa Fe than a grown-up Creta. It shares more design cues with its larger siblings, like the rising window line which sharply kinks upwards with the rear quarter glass. Getting a car's proportions spot on is possibly the most difficult thing for a designer and Hyundai has once again nailed it with the Tucson which, sitting on 17-inch alloys, looks so well balancedThe interior design feels rather subdued after the Tucson's flashy exterior and it's obvious that Hyundai has prioritised function over form and there's a sense of blandness in the cabin. In fact, the dashboard, in this instance, looks closer to the Creta than the Santa Fe. There's a familiar two-tone design with a distinct separation between the infotainment and air-con control units. The touchscreen sits high up and is closely flanked by wing-shaped air vents , all Hyundai cues. Below the pod for the air-con unit below sit all the power sockets (two 12V, one USB, one aux) and under that is a spacious cubby hole ! it's the same logical layout you have in the Creta. The instruments too are simple and easy to read with a small screen in between. The four-spoke steering is again familiar with buttons that are shared with the Creta. The quality of materials is a clear step up from the Creta with the extensive use of soft-touch plastics. The double-stitched leather seats too feel premium and like most Hyundais, the Tucson too is well equipped. Our test car in the UK came with all the bells and whistles including electrically adjustable seats, autonomous emergency braking and six airbags. The features list for the India-spec Tucson is still not confirmed, but going by Hyundai's track record, it will be fully loaded. Passenger room is quite generous in the Tucson and again, the space on offer is closer to the Santa Fe's. But unlike the Santa Fe, there's no third row in the Tucson, which allows second row seating to be optimised. What this means is that there is more than enough width, legroom and headroom for five average-sized adults to get genuinely comfortable. All the seats are high set and the visibility out of the cabin, except in the rear three-quarter area, is pretty good. Boot space, again, is very generous and the seats can be flipped down to accommodate more.. 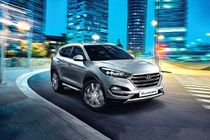