Nothing but the smaller version of its own international trim of oddessy, external look and is less plagiarized features of crosstour to match the rival Suzuki Ertiga which in itself is extended version of Swift to form an MPV and Toyota Avanza compact boxed version of Innova is already sold worldwide. All you have to do is look at the middle east and far east version of the Suzuki website and you would then predict those all upcoming models of cars for the Indian market. That's the secret of Indian automakers, the global parent companies infuse all the already proven model of their own brands from near regions with tweaks for mileage in mind for the Indian consumers. From a buyers view, Mobilio is simply a car which conveys me from A to B delightfully.

4.0/5
Based on25 User reviews
Write Your Review
Mobilio Reviews 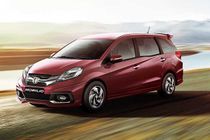