SUV space has become so tight-noose that from compact to mid-sized and full-fledged SUVs, all are jostling to get a share of the pie. But giving the customers all they want is the only path to success. This is exactly what Honda is upto with its all-new CR-V SUV. I had the opportunity to see the fifth generation Honda CR-V which was recently unveiled at the Auto Expo. And since I was aware of the specs which were revealed earlier, I could say that the new Earth Dream diesel engine the company will be putting under the hood, would surely turn the game in its favor. It is powerful and fuel efficient than the earlier one and it?s a big step forward. The exteriors and interiors of the car have been completely refurbished and it?s certainly evolutionary. Along with adding bulk to the car, the new additions include LED headlights, split tail lamps, improved cabin space, a new 7-inch touchscreen infotainment with Android Auto and Apple CarPlay, dual zone climate control and one-touch power sunroof. Honda had a hard time selling this SUV in India for last few years. But with the launch, Honda CR-V is expected to revive the competition against Fortuner and Endeavour in the segment.

Honda is cheaper in Thailand and Indonesia. Import from Japan. Cheaper even after paying custom duty

Honda is cheaper in Thailand and Indonesia. Import from Japan. Cheaper even after paying custom duty

4.3/5
Based on46 User reviews
Write Your Review
CR-V Reviews 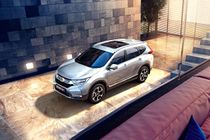