Decoding Purchase Of EcoSport Over Its Rivals

Decoding Purchase Of EcoSport Over Its Rivals

I went through several cars in the compact SUV segment and moving on from the Bolero to something peppier was the idea. The Ecosport launched in 2013 brought the entire segment to the fore. With the necessary facelift and tweaks, the car attracted me. One of the main reasons I chose this car over its rivals is because of the speed limit. This is a mighty feature on Indian roads where accidents are so prone. The alarm when the car touches 80 and then 100 and above on the speedometer helps largely. The other reasons are the body is strong and well built. The car has a good ground clearance and spacious boot space. The legroom is good. What Ford has done well is keeping features that help rather than what you don't need. It also has the best touchscreen in the segment. The car's look is ahead of its rivals as well. With 6 airbags, the sport model boasts safety. The car is also very simple and ain't complicated with overrated stuff. Cars like Venue and Sonet are feature-loaded but lack the bite. Nexon and XUV 300 promise safety but are behind in other areas. In the EcoSport, you get all of this combined. Also, no car in the segment can beat EcoSport when it comes to driving experience and handling. If one loves driving and wants a fun ride backed by the Ford engine, this should be your car. I have the diesel sports version and it's fun. Ford showroom dealers are friendly and direct. I have got a solid car and that makes me happy. Trust is crucial and the EcoSport gives just that.

4.5/5
Based on98 User reviews
EcoSport Reviews 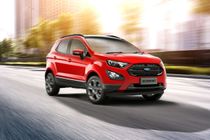 HomeNew CarsFordEcoSportFord EcoSport ReviewsDecoding Purchase Of Ecosport Over Its Rivals