Published On Oct 12, 2016 By Tushar for Toyota Platinum Etios

The horse is quite a symbolic animal in the auto world. Ferrari and Porsche have it on their logo while the Mustang has a galloping badge of its own. The obvious connection here is the obsession with horsepower. However, at least in India, Toyota chooses to prioritize workhorses over animalistic performance. Case in point – everything from the Fortuner to the Innova Crysta and Corolla Altis comes with the promise of almost endless reliability. The brand’s range commands a premium price, even when there are better-equipped alternatives available at more competitive prices. 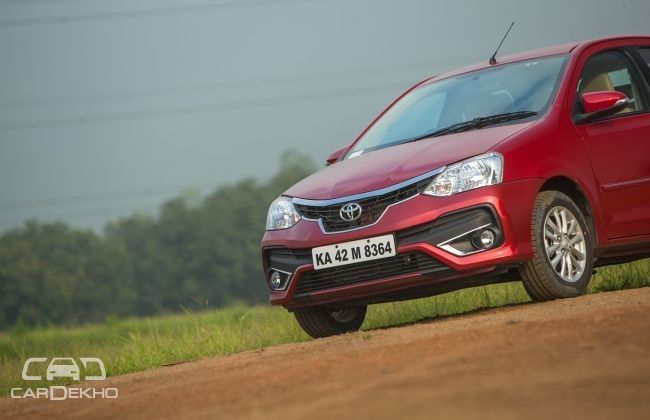 This reputation for reliability has developed a strong customer loyalty base for Toyota, but also comes with a little problem – it’s made the Etios in particular become a taxi market favourite, especially after the arrival of app-based cab services.

That doesn’t go down well with private car owners who want something premium. So here we have the Platinum Etios, with which Toyota is hoping to get back into the white number plate game. Does the new formula work?

On the surface, the most noticeable change with this facelift is, quite literally, the face. The Platinum Etios gets a completely new front bumper with black and silver inserts that make it looks sporty, especially in bright shades like red. The chrome usage is a little more tasteful too and there’s a thick strip above the front grille that’s in line with the look of the Camry.

The new rear bumper looks more chiselled and the chrome strip on the boot sits below the brand logo. No other significant changes have been made, but the differences are visible, if not loudly pronounced.

Even on the inside, the updates aren’t easily seen, but look closely and you’ll spot a pleasant change. The instrument cluster, while still placed atop the centre console, has a better looking layout and includes a digital tachometer along with the analogue speedometer. The black and ivory interior colour combination looks nice and mature, but the plastic quality is still quite hard and lacks the premium touch you’d expect at this price. The feature list still isn’t anything to write home about, but while the flat-bottomed, leather-wrapped steering wheel and 2-DIN sound system have been carried over, you also get a height-adjustable driver’s seat as standard on all variants.

The wing mirrors are now foldable on the top-end VX/VXD grade too. The cabin’s utility has improved as well and apart from the addition of a well-sized rear armrest, the rear backrest folds down to open up more storage space. We would’ve liked integrated cup-holders in the armrest and a 60:40 split seat, but that’s just nitpicking. The boot space drops 3 litres to 592-litres (to accommodate the armrest console), but even so, the Platinum Etios offers segment-leading cargo space.

No compromise on the Etios’s main selling-point either – comfort. The cabin is spacious, the seats are supportive and well-cushioned and the 1,695mm width equates to good shoulder room for 3 adults at the back.

While dual airbags came as standard before, both, the Platinum and fleet versions of the Etios get ABS with EBD and ISOFIX child seat mounts right from the base variant! Adjustable headrests and 3-point ELR seatbelts are now offered for all 5 passengers too. The safety tech isn’t exclusive to the Platinum, but that’s hardly a bad thing.

Mechanically, the Etios remains the same in its updated avatar. You still get the same 1.5-litre petrol engine good for 90PS of power and 132Nm of torque that offers a claimed fuel economy of 16.78kmpl, and the variant we drove, the 1.4-litre diesel that makes 68PS and 170Nm, with a rated economy figure of 23.59kmpl. Toyota does however, claim that noise, vibration and harshness (NVH) levels have been improved. Does the on-paper claim translate into the real world? In fact, it does. Driving the Platinum is a quieter experience and the cabin insulation does its work well, even in the diesel. Given the private car buyer-centric approach of this update, the improved NVH levels are a welcome addition, but what’s missing is the option of an automatic transmission.

You still get a 5-speed manual gearbox with well-spaced ratios to match the torquey engine. The motor itself is well-refined and power delivery is linear. There’s very little turbo-lag and you can comfortably drive at 100kmph all day long, but it’s not rev-happy. Even when the turbo kicks in, the surge is easy to manage, but the revs take their time to build up. It’s not an engine that likes to be pushed and voices its protest as soon as you get close to 3,000rpm. Hard revving will make the engine sound strained without much gain on the speedometer. Like most low-displacement diesels, it prefers relaxed usage and cruising.

Throttle response is crisp, the clutch is light and since the peak torque is yours to use from just 1,800rpm, early upshifts are the best way to optimize drivability.

Ride quality is good and it can handle most potholes without much fuss, while its behaviour is composed on the highway too. The steering is a bit heavy, but there isn’t much feedback. By no means will it please an enthusiast, but it’ll do just fine for your daily drive needs.

Overall, the Platinum Etios doesn’t change the identity of the car it always was, but improves on it. Even with prices ranging from Rs 6.54 – Rs 8.98 lakh, it still misses out on commonplace features like automatic climate control, rear AC vents, or a proper multi-information display, but continues to offer more space and comfort than similar priced compact sedans. It’s far from feature loaded, but puts a nice suit around the reliable package that the Etios is to make it more appealing to the family car buyer.

If all you want is an unassuming, comfortable, spacious, can’t go wrong car with the bare essentials, the ‘Platinum’ does make the Etios more desirable. That said, the car is showing its age and it’s high time Toyota filled in the humungous price gap between the Etios and Altis with something that offers the best of both worlds.