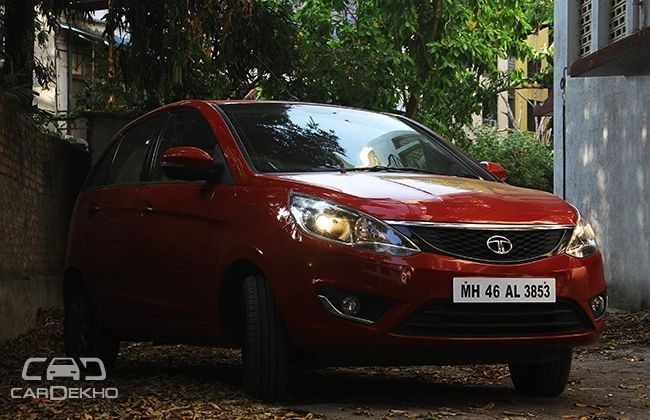 Amongst the first entries to the CarDekho garage this year, was the Tata Bolt. We’ve been living with it for a while now. After clocking around 2000kms in around a month, here’s a quick round up of how the hatchback has performed.

We really like the amount of space the Bolt has on the inside. To test it out, we folded the rear seats down and opened the boot. We know that isn’t the standard test of space, but hey, we do things a bit differently! With the seats down and the hatch opened, the Bolt could accommodate two cameramen with their tripods fully set up in the boot area. Our camera guy loves the Bolt for this very reason. Two key negatives about the interior would be the seat cushioning and the storage space. While the cushioning is adequate, we think it could have been slightly softer. After a long drive, the back does tend to ache a fair bit.

Secondly, there’s very little storage space inside the cabin. The glovebox is deep, but that will be occupied by the car’s documents. Other usable spaces remain the lone cupholder (that we ended up using for the air-freshener) and slim door pockets. Inevitably, we ended up placing our phones, wallets and what not just ahead of the gear-lever, which seems to work fine, right upto the point where-in you change directions. I’ve lost count of the number of times I’ve found my phone under the clutch or the passenger side footwell of the Bolt. A reasonable solution is to tuck the phones away in the door pockets - they aren’t great at holding bottles anyway. Lest we forget, there’s a tray under the co-driver seat which we used exactly once. We’re glad Tata has taken feedback seriously and incorporated a lot of storage spaces in the upcoming Tiago. The Bolt definitely lacks in this department.

The aircon on the Bolt, it is an absolute chiller once set to low. The downside would be that the fan gets annoyingly loud at high speeds. That’s a small inconvenience in our books, since it manages to keep us cool in the near 40°C temperatures that Mumbai is witnessing over the past week. On a related note, the sensor that ascertains ambient temperature has definitely gone cuckoo. As you might have noticed in the pictures, it read out 49°C in the evening. The other goodie the Bolt boasts of, is the touchscreen infotainment system. We wish the touchscreen was a tad more responsive. Audio quality is average, nothing great to speak of.

The odo was around the fifteen thousand kilometre mark, when we were handed over the keys to the car. Mechanically, the car wasn’t in great shape. The front right tyre was knackered and the clutch felt like it was on it’s last legs. None the less, we decided to put it through it’s paces to see how it’d fare. After accompanying us on quite a few shoots, the front tyre had to be inevitably swapped for a spare. The stock 175/65 R15 tyres are mounted on rather nice looking alloy wheels finished in gunmetal grey. The spare on the other hand, is a 175/65R14 tyre on a steel rim - that looks ghastly, and limits you to 120km/h. The clutch, weirdly enough, soldiers on. The Bolt has seen a healthy mix of sedate driving (thanks Abhishek!) and some pedal to the metal action, courtesy yours truly. While Abhishek thinks the clutch isn’t as big an issue, I find it plain annoying. The release isn’t one smooth action. It feels like it is resisting every single centimeter of travel. The biting point is relatively high too, but that can be fixed with a service, we’re sure.

Over the course of roughly two thousand kilometres, the Bolt has been a dependable workhorse. Efficiency has always hovered around the 17km/l mark.  Even though it wasn’t in the best of conditions to begin with, it hasn’t given us a reason to complain. It is nimble around the city and surprisingly mature on the highways. The steering is light and precise too! The gush of torque post 2000rpm still manages to plant a silly grin on our faces.