We drove the new Fiesta 1.5 Petrol Automatic around some sunny roads in Goa to see what how different this automatic sedan is as compared to the others in the segment. 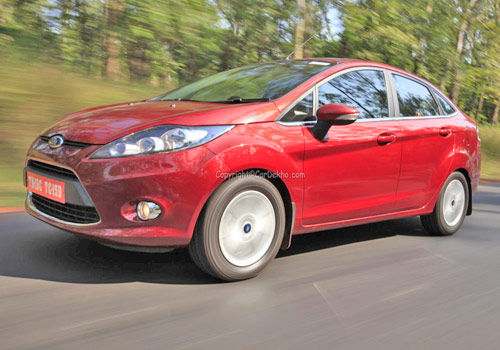 But before we move on to our verdict on the car here is a small background about this car. In July this year Ford had launched the all new Fiesta while riding high on the success of its hatch the Figo. As we all know the Figo did a complete turnaround for Ford India and helped it come out of the Red in terms of sales and market share.

The new Fiesta though a brilliant car did not do great wonders in the segment and initial sales figures did not make it to the top of the segment either. The new Fiesta was launched in four engine options on Petrol (1.5 Ti-VCT) and four engines on the Diesel (1.5Tdci). We had test driven the new Fiesta before its launch and were impressed with it big time.

Like all Ford cars the new Fiesta is also a very driver oriented car, loaded with many sporty features. Now Ford bolts a Six Speed Dual Clutch auto transmission to the new Fiestas 1.5 Petrol engine. Let’s find out more on the new automatic gearbox from Ford.  Ford calls this six speed auto-box as Power-Shift and with this Ford Fiesta becomes the first car in its segment to get a Dual Clutch gearbox. Dual clutch gearbox are known to be very quick in their shifting thanks to two clutch mechanism that this intelligent gear box engages the 1st-3rdand 5th gears on one clutch and 2nd-4th and 6th gears on the second clutch hence reducing the shift time to the lowest.

The ECU (Electronic Control Unit) intelligently detects what speed and RPM the engine is at and also checks with the drivers throttle inputs to shift gears up or down via the two clutch that are ever ready with the correct gears. This dual clutch auto gearbox from Ford uses dry clutch system that helps reduce a massive 13kgs as compared to a wet clutch system in turn reducing the overall weight of the car and helping increase the overall fuel efficiency.

The use of the dry clutch system also makes the gearbox go without a torque convertor etc. Ford engineers have also put in some advanced features like Micro slip that enables smooth gear changes and helps in dampening transmission noise and helps in running the engine at a much lower RPM when driving the car in the fifth and the sixth gears. There is a feature called as the creep forward that moves the vehicle ahead at a very gentle pace when the shift is in the Drive mode and with zero throttle input. This feature is very handy in slow bumper to bumper traffic conditions and the driver just needs to control the vehicle using the brake pedal.

There is also a very intelligent feature on the Power-Shift gear box known as the Ford Grade Assist that is very handy when going uphill or while climbing a slope. This system can be activated by a small button on the right of the automatic shifter. This mode intelligently selects lower gears when climbing a slope and also acts as a perfect engine braking if you are coming down a slope as you are driving in a lower gear and hence enhancing the engine rpm that acts as a brake system.

You also get the hill assist feature that is real handy when climbing slopes, in this feature if you completely stop on a uphill and you want to avoid the car from rolling back you just need to press the brake pedal for about 3 seconds and then if you release the brake pedal the cars intelligent braking system keeps the wheels locked for about 3 seconds and gives you enough time to get back to the accelerator to move ahead.

You get five drive modes to drive in namely, P (Park), N (Neutral), D (Drive) and lastly L (Low). Ford has not felt the need to get in a paddle shift or tiptronic shift option on the Fiesta Automatic. For the best drive feel and optimal performance with efficiency drive in the D mode. In the D mode the Fiestas automatic gearbox selects the best gear and harmoniously shifts thru the six speed tranny.  In the L mode what the gearbox does is that it downshifts to the lowest possible gear at that particular RPM and speed to give you good engine braking if on a downhill or uphill. In the L mode the Fiesta also gets the most of its power as the engine is running at a lower gear and higher RPM which is perfect to climb slopes or even overtake at times.

You get the regular (manual) Fiestas cruise control as standard on the automatic version too. We found the cruise control to work flawlessly on the Fiesta automatic. The Fiesta automatic gets an all black leather seats that make the cabin look sportier. The Fiesta automatic gets two airbags (Driver and Passenger), Voice activated controls (unique feature also on the manual Fiesta), auto fold mirrors with integrated turn lights, single zone climate control, front and rear fog lamps, ABS, EPAS steering system with Pull Drift Compensation (PDC), ESP (Electronic Stability Program), Alloy wheels, reverse park sensors, keyless entry etc to name a few. These features may look a lot on papers and mean a lot but how they all work actually on the road is what really matters.

We took the new Fiesta Automatic to a hill to check out how the Grade assist and the Hill assist worked. So, we can add here that both the features worked rather well on the climb and while going downhill. The creep feature also came handy during the bumper to bumper traffic that we encountered on a small patch in Goa. The Fiesta Automatic tasted some highway run after the hill test. The 1.5 Petrol motor is super refined and very responsive to the dual clutch auto gear box and that is instantly noticed. The gears shifted seamlessly and the dual clutch mechanism was highly responsible for the near zero shift lag.

We did a drive of over 140kms and the Fiesta Automatic never felt out of breath or short of response. The drive also included some ghat sections (uphill ride) with twists and turns and hair pin bends which the Fiesta galloped in its true pace without any complaints perfectly like a true driver’s car. The suspension on the Auto Fiesta has been beefed up and that did show on the rough roads that we encountered.

The Fiesta automatic is a true driver’s delight, a flawless six speed automatic dual clutch gearbox. Loaded with unheard of advanced features like Grade Assist and Hill Descent, ESP makes the Fiesta Automatic the most advanced car in the automatic car segment currently.

The new Fiesta was always a great looker and a superb handler and a car with a very well balanced ride quality and this the automatic version takes it a step forward with the convenience of an intelligent dual clutch six speed automatic shifter.

Our last lines – As of now Ford India officials has ruled out any possibilities of an Diesel Automatic but we wish and hope that Ford gets the Diesel Automatic with this amazing Dual Clutch Automatic gearbox soon.

Competition to the Ford Fiesta Automatic

The Hyundai Verna, Maruti Suzuki SX4, Honda City, VW Vento and the Skoda Rapid are the other petrol automatics are going to compete with the Ford Fiesta Automatic when launched.

However the most noteworthy thing here is the fact that none of the competitors have such an advanced auto gearbox on their car models for the Indian market. It’s time to Power-Shift with the New Ford Fiesta Automatic.