Affordable, attractive and innovative. Renault India says these are the keywords that define the the Kwid. Can't really disagree, as the French carmaker's fresh approach to making a small car has helped it carve its own niche in a segment several other manufacturers haven't really been able to crack. And that too in a relatively short time span of just one year, particularly thanks to its SUV-like design. Not to mention, a host of first-in-class features have helped it find favour with small car buyers, irrespective of whether they were first time buyers or not. 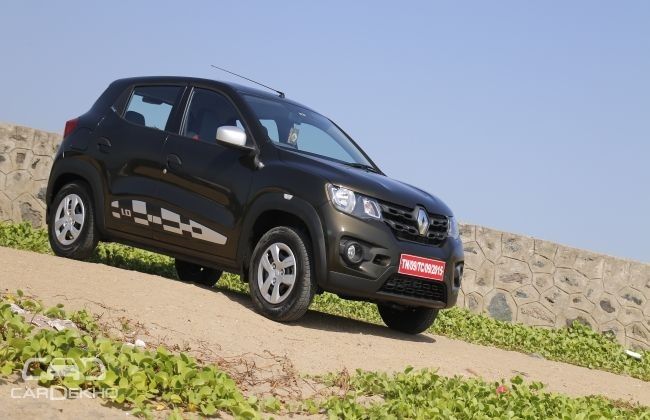 The news of Renault planning to the launch the Kwid with a 1.0-litre engine in addition to the 800cc motor was only welcome then, as a larger engine means more power, and that's always good news! Add to that the Kwid's appealing design, elaborate feature list and you have a more likeable package. Renault invited us to drive the car with the new engine, and here's what we thought of it.

To begin with, there's almost no change to the car visually, except for silver coloured outside rear view mirrors and chequered stickering on the sides, which incidentally is the only place you'll see the 1.0 mentioned on the car. This means you get the same appealing design with nice looking headlights, a muscular looking grille and lots of black cladding all round for the SUV-like feel. The story is the same on the insides too, as interiors are identical to the 800cc engine equipped Kwid. So you get the same, rather well-built cabin with good quality plastics, large digital speedometer behind the steering wheel and of course, the touchscreen infotainment system with Bluetooth connectivity and navigation. All of these, as you would remember, are segment firsts.

The insides of the Kwid 1000cc feel slightly more premium than other cars in the category, which is one of its highlights. The cabin feels nice to be in, though shoulder room isn't exactly generous for those with a large frame. Interestingly, the Kwid now gets seat belt pre-tensioners, which the manufacturer claims is yet another segment first. Sadly, there is still some time before we get to see features like ABS and dual airbags make it to this segment of cars, and Renault India says customers are not willing to pay more for these safety features yet. That said, Renault says the Kwid will soon be exported to other markets abroad, and the car is ready to be fitted with the aforementioned safety features.

Moving onto the biggest change, which is the engine under the hood. The bore and stroke of the three-cylinder, 800cc engine were increased to achieve the higher displacement which means that the basic engine architecture is identical. Power and torque are thus up, with the engine offering 68PS of power and 91Nm of torque as compared to 54PS and 72Nm earlier. The engine is mated to the same five-speed gearbox as before, and the ratios are the same as well, with the only difference being the strengthening of the drive shaft to handle the additional torque. As opposed to 25.17kmpl figure for the 800cc version, Renault is claiming 23kmpl for the 1.0-litre Kwid, which means you can expect similar numbers in the real world, of course depending on how you drive.

Start the engine and it comes to life with the typical three-cylinder thrum. The additional power does not make itself felt as you take off, though as I started driving the difference in performance was noticeable rather quickly. However, the 1.0-litre Kwid is 40kg heavier than the 800cc version, which takes away some of the advantage the extra 14 horses try to offer. The car feels quicker to accelerate, especially through the gears, with a slightly more torquey feel than the 800cc engine. The 1.0-litre engine also makes for a more stress-free drive as speeds build up, since the engine feels more relaxed than its smaller version at high speeds. In effect, the 1.0-litre engine makes the Kwid a better car when cruising at speeds of 90-100kmph, which should also enhance its abilities as a car to drive over long distances. The engine feels as smooth as its smaller version, but, tends to sound a bit gruff at higher revs, purely due to the three-cylinder configuration. The clutch has the same light feel and gears are easy to slot in spite of a slightly rubbery feel. Brakes could have done with more bite as well, since they offer a slightly spongy feel when you have you slam the pedal.

The Kwid 1.0 feels identical to its 800cc version in terms of ride and handling as there are no mechanical changes to the car outside of the engine. The suspension thus makes for a rather comfortable ride on most surfaces. That said,it tends to feel bumpy over undulated roads at higher speeds. The Kwid isn't exactly meant for cornering and thanks to the softer suspension setup there is some body roll too, but it feels confident even when chucked into a corner. Tyres still feel skinny and could have offered better grip. We would have also preferred a slightly softer compound as compared to the current ones.

To sum it up, the 1.0-litre engine has made the Kwid a bit more fun to drive, and you're not really left wanting for power on most occasions. The improved performance helps in making the Kwid a better car, be it in the city or on the highway. The bigger engine is being offered only with the top two variants, as Renault says these variants have made up for 80 per cent of the car's total sales. And it's obvious that someone buying the more powerful version of the car will want a feature rich variant and not the lower ones. Prices for the car will be announced on August 22, and we expect the 1.0-litre Kwid to cost about 40-50,000 rupees more than the 800cc version. And that's not a lot of money when you consider how much more the 1.0-litre engine compliments the Kwid's appealing design and expansive feature list.