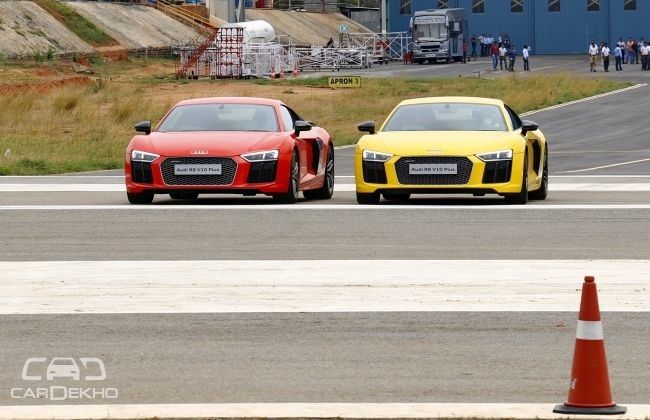 Personally, I couldn't have asked for a better first-time supercar experience. Yes, I have driven some absolute bonkers cars in the past, but they were merely everyday ones with behemoth engines. However, this was the first time I got to grips with something whose sole purpose in life was to break necks and gallop towards the horizon before you can say 'holy sheep, that's quick!'

I've admired the R8 for long. Sadly, it has been passed off as a mellow German amongst a barrage of Italian exotica far too many times. However, this time around, it means business. The moment you lay eyes on one, you know it’s going to grab you by the scruff of your neck and toss you about a bit. I like that! The design is meaner, sharper and more aggressive. The laser headlights, large hexagonal grille and the massive air dams give the R8 an unmistakable identity. We also love the large 19-inch wheels that are wrapped in super sticky Continental rubber, the slick carbon fibre side blade, and the spoiler that sits pretty on its derriere.

The supercar shares up to 50 per cent of its parts with the LeMans racecar. It is immediately evident once you open the frameless doors and get inside. The interiors seem more driver-focused than ever before. You sit close to a foot off the ground and feel one with the car instantly. It is based on a 'monoposto’ concept, which essentially cocoons the driver in the captain's seat. All the driver sees is a TFT display that houses the meters and the maps, the leather-clad steering wheel and a smidge of the low-slung nose. Audi has also loaded the R8 to the gills with tech on the inside as well. However, since we had very limited time with the R8, we chose to adjust the seat, hit the big red button on the steering, hear the engine fire up and rocket off.

The V10 motor is essentially the same you'd find on a Lamborghini Huracan. It makes an eye-watering 610PS of power and 560Nm of torque. Power from this screamer is harnessed by a dual-clutch S-Tronic automatic gearbox that sends power to all four wheels via Audi's renowned Quattro technology. We had the chance to belt the R8 on a closed runway just outside Bangalore. So, there I was, at the helm of a supercar, with an open 1.7km long runway in front and a V10 engine roaring behind me, ready to go at the behest of my right foot.

Here's how the car was set up: gearbox was in Sport (obviously) and the engine was set in the most ferocious mode — Performance (double obviously). Right then. I did what any other sane guy would do, I  floored it! It took me half a second to come to terms with what happens when you push the A pedal to the floor on a supercar. First,  you hear a glorious noise. Err..not noise... music. Let's call it the V10 symphony.

We have to say that the all-wheel-drive system helps the R8 maintain composure off the line. We did 'launch' it by building the revs, but, unsurprisingly, it doesn't wiggle or shimmy about; it just darts straight ahead without fuss or drama. 0-100kmph comes up in just 3.2 seconds, and before you know it, you will be doing illegal speeds. For the record, top whack is a staggering 330kmph! The specimen we belted on the runway was equipped with the optional ceramic brake package as well. Needless to say, coming to a dead halt from over 250kmph was a relatively fuss-free affair. There’s no drama, just a reassuring ‘I’ve got your back’ from the brakes.

The R8 has always been the people’s supercar. With this iteration though, Audi has taken the term ‘more power to the people’ a bit too seriously. The new R8 is lighter, faster, meaner and, thankfully, just as likeable as before. A straight line sprint is all we had with the R8, so we will hold our horses about the handling and ride till we get our hands on one later. We cannot wait to have a go again, so, do stay tuned for an in-depth review.