Published On Feb 16, 2013 By Rahul for Mini Cooper Convertible 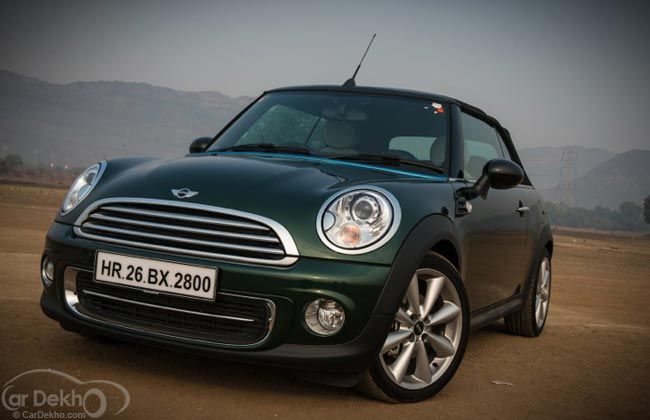 “It looks interesting, but when can we see it in India?” were my thoughts when I saw the Mini Cooper Convertible getting unveiled at the 2011 Frankfurt Motor Show.

The response to that was immediate as BMW announced the launch of Mini brand in India in 2012, making it the 100th car market for Mini.

Since then, my evil mind has been dreaming, plotting and planning to drive the Mini Cooper Convertible. Now, the wait came to an end as I got my hands on this tiny little hatchback that has a soft top.

I have driven the Mini hatch and even the Countryman, but the Convertible has its own charm. We share our review of the Mini Cooper Convertible.

The silhouette remains the same, except for the fact that it now gets a soft-top than a hard, fixed one. The Cooper gets large 17-inch wheels that make it look muscular when compared to the older-generation Mini.

It has a clean side profile without any crisp lines and has a chrome strip on its beltline, and door handle. The rear of the Mini Cooper does look classy and elegant when the top is opened and a bit odd when the top is closed. We got the convertible in British racing green, which contributed to the styling.

Warning! If this is the first time you are seating in a Mini Cooper than you will it difficult to understand the locations of various buttons.

The design of the Cooper is like a cockpit with several switches like an aeroplane, even the large round speedometer reminds of an old plane. Ahead of the driver what you get is a tachometer with a digital speedometer.

The Mini Cooper Convertible is a 2+2 seater with the rear ones meant strictly for kids. It being a two door, the front has to flip down to make way to get into the rear seat.

The front seats have decent legroom and headroom, however it be a bit tight if you are taller than six feet. The boot is decent for its size, as our large tripod, two camera bags, a backpack and a laptop bag all were easily swallowed by tiny Convertible’s boot. This is all despite the soft-top being open.

The Cooper misses out on electrically adjustable seats and steering, satellite navigation etc. that you can get in any other vehicle at this price tag. But what you get is an iconic vehicle that you can boast about.

Mini has plonked the 1.6-litre naturally aspired petrol mill on the Convertible just like the hatch that whips out a power equivalent to 122 horses and a peak torque of 160Nm can be generated. The NVH level of the mill are fairly low with decent power delivery. There is no punch in this engine and the petrol heads will stick to the Cooper S for its brutal power and outright performance.

The Convertible is more of the wind in your head types, and meant for those, whose road is a friend and life is a journey sorts. The power is decent and good for overtaking. The six-speed automatic transmission on the Convertible is the same that comes on the other Coopers. It is a bit lethargic and you feel it the moment you slam your right foot. One thing that we missed sorely on the Convertible was the

The Mini wasn’t just compact with loads of space and revolutionary front-wheel driven, but it was fun once you got behind the wheel.

It used to drive like a go-kart with a direct and precise steering wheel, and the some characteristics have been trickled into the Coopers as well. The steering quite accurate and always feels connected.

The ride is a tad harsh and you do you feel most of bigger bumps as the shocks get transferred into the cabin. It is a bit softer than the Cooper S, and even the suspension travel is more. Due to this, the handling isn’t as impressive as the Cooper S.