Published On Jun 24, 2014 By Rahul for Mercedes-Benz A-Class 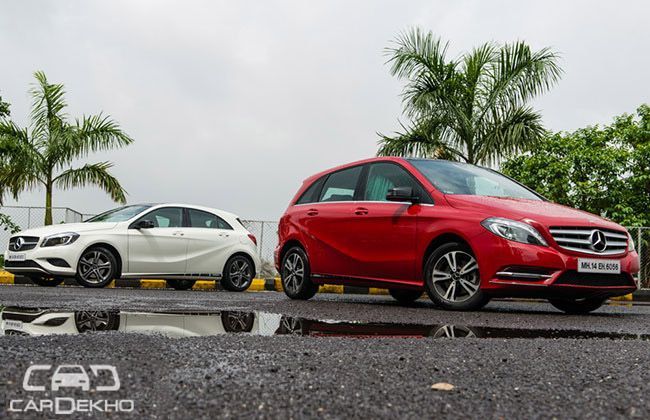 With special editions working well for Mercedes-Benz, the Stuttgart-based manufacturer is introducing the Edition 1 for the A-Class and the B-Class. These are the two entry-level products for the three-pointed star at the moment, and the only Mercedes-Benz products that are front wheel drive. The Edition 1 has more features that than the existing A-Class and B-Class. We take a quick drive in these two new edition vehicles and find out, how good they are when compared to the existing A-Class and B-Class.

The A-Class is one of the stylish hatchbacks around and the diamond front grille adds on to the existing style. The B-Class has been a luxury tourer and it retains the same styling even on the Edition 1. The cosmetic changes on the Edition 1 are a few. To begin with, both the A-Class and the B-Class now get Edition 1 stickers on the rocker.

The alloy wheels too on the A-Class and B-Class have been changed. Post this edition vehicles, we will see these alloy wheels on all the new vehicles. Another upgrade on both the vehicles is sunroof, both the diesel variants come equipped with sunroof in these models. The A-Class with these embellishments does get the extra glam and is certainly the most chic looking hatchback at the moment in the country.

The A-Class and the B have got cosmetic changes, but the changes are minor, there aren’t major changes on either of them. To begin with, there is a sunroof on the diesel variants from now, then there is also a reverse parking camera on both the diesels, which weren’t there before. The rear seat also gets armrest, a feature not seen before on these MFA platform based vehicles.

The B-Class also gets rear seat entertainment as a new add-on in this Edition 1. The A-Class misses out on this feature. Apart from that, the rest of the kit remains unchanged. Also, both the co-driver seats are now electrically adjustable with memory seats. The interior styling and even the black instrument panel are retained on both the three-pointed stars. The quality is also top notch with good fit and finish.

The Edition 1 is offered only on the diesel trim of the A-Class and the B-Class. This is a 2.2-litre that powers the C-Class and even the E-Class, however the power has been reduced to 108bhp from 204 for better fuel economy. The A-Class and the B-Class have decent power, with A being the lighter one, the power delivery is wee bit more linear and even the throttle response is better. The B-Class is more of a cruiser and one doesn’t really feel the urge of more power unless you are want to make that quick overtaking manoeuvre.

This 2.2-litre diesel engine comes mated to a seven-speed dual-clutch self-shifting transmission. The shifts on the box are a tad slower than what we are used to on a dual clutch box, but the good part is there are no jerks. This has been done to achieve smoothness and jerk-free experience. Another good aspect of the diesel engine of the two vehicles is their fuel efficiency. Even in city, we have achieved a magical efficiency of 14km/l and on many instances it is even more than this. The credit of this goes to the reduced power and even the front wheel drive, which increases efficiency in transfer of power.

There is good news: the ground clearance of the A-Class and the B-Class has been increased. Now, it doesn’t scrape its underbelly on speed breakers. Beginning with the Edition 1, all the new A-Class and B-Class will have a raised suspension to suit the Indian road conditions.

The ride still remains pliant and the tyre profile on the Edition 1 is higher for better ride suppleness. The ride on the A is a tad stiffer than the B-Class. The handling too is good on the A, but the B-Class has evident body roll. The steering wheel is also light and easy to drive in city or for a long run.

The Edition 1 does get some major upgrades, which one might not see in the regular models, like the rear-entertainment package and stuff. Hence, this is worth a buy, unlike some other editions introduced by luxury car buyers, this one is surely a good one.