Ever since the Kwid was launched last year our lives as auto journos has taken a strange turn. Before the arrival of the French on the scene, the ideal choice for a first car was mostly the Alto and in some rare cases, the Eon or the Nano. But with the arrival of the Kwid on the scene, the equation has drastically changed. Be it someone upgrading from a motorcycle or planning to buy their first car, the quintessential question these days is; “Kaunsi lun sir? Alto ya Kwid?” (Which one should I buy, the Alto or the Kwid?). So here we are and we’re settling the debate once and for all, or at least we’ll try. 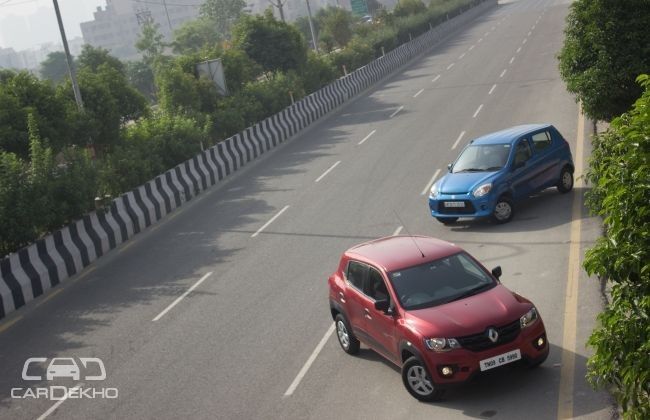 There’s no contesting the fact that despite aesthetics being a subjective matter, the Renault is the not only the better looking of the two here but is easily the best looking car in its segment. The prominent front grille flanked by two sleek looking headlamps, a large front bumper with plastic cladding and a contoured bonnet give this hatch an SUV like appeal. Add to that the slightly raised stance and black plastic cladding all around the car along with a high tailgate and you have a car that could almost be passed on as an entry level crossover.

The new updated Alto, on the other hand, stays mostly true its design since 2012 barring minor aesthetic changes to the front facia and the rear bumper. The narrow grille has been replaced by a thin slat (like on the Chevy Spark). The usual smile of the Alto’s fascia has now been replaced by a grimace, maybe to make the car look a bit more aggressive. But having said that it does lend a bit of character to the country’s favourite small family hatch.

When it comes to the interior, the Kwid makes great use of the space inside the car despite its size. The driver’s perch is comfortable for even the taller and generously proportioned occupants. The space in the rear too is ample and you seldom feel uncomfortable despite the lack in kneeroom. The entire cabin is bathed in different shades of black and is made of plastic. It looks rather well made and appealing to the eye especially the piano black finish on the centre console around the infotainment system. The chrome inserts on the AC vents give the cabin a more upmarket feel. However, the plastic quality the steering wheel feels a bit coarser than it should. The instrument cluster is an all digital affair which looks rather good and gives a slight motorcycle-esque feel though it is devoid of a tachometer. Sitting on the driver’s seat I have to admit, the visibility is limited. Half the windshield is taken up by the bonnet and the rear windscreen looks like it’s half a kilometre away from the rearview mirror. The boot though measures 300 litres making it the best in class offering which can be extended to 1115 litres by folding the rear seat down.

The Alto’s cabin on the other hand is the familiar cabin that we are quite used to. There are silver accents on the steering wheel and on the centre console along with fabric door inserts on all four doors. The power window (front only) buttons sit in a familiar place, just ahead of the handbrake like before  compared to Kwid’s which sit on the centre console just below the AC controls. In addition, the view both front and rear from the driver’s seat is rather good and the car gives a roomy feel despite being rather small. The ORVMs are manual but can be adjusted from inside the cabin thanks to the stalks mounted on the A-pillars on either side. The seats are comfortable with adequate thigh support, the back support too is good but the side support is rather limited, though leg space is decent. Space in the rear though is adequate only for two and taller occupants will feel the lack of headroom. Boot space too is lesser compared to the Kwid

Where the Kwid comes with a 7-inch touchscreen entertainment system with Bluetooth connectivity, the Alto makes do with a single DIN audio system with USB and AUX only. Also there is no satellite navigation like on the Renault. The Kwid’s infotainment system though features a great touch interface, figuring out the system itself takes time. Also, if you have an Android phone, the system will most likely drop your Bluetooth connection within seconds. Both cars come with driver side airbags and power steering but Kwid features fog lamps whereas the Alto doesn’t.  The instrument cluster of the Kwid also comes with a gear shift indicator, a feature that is missing on the Maruti.

On the move, the engine on the Kwid also feels jerky whereas the engine on the Alto feels refined and composed. And the Kwid quite noisier too. But the extra power and torque placed primarily at the top of the rev range translate to a quick accelerating car. Though, the gearbox does hamper the experience as it feels relatively spongy and lacks in feel. The Alto on the other hand too feels peppy despite being low on power and the precise gearbox with shorter throws makes driving it rather enjoyable.

In terms of fuel efficiency, the Kwid is more fuel efficient than the Maruti but only just 25.2kmpl compared to 24.7kmpl. But the fuel tank capacity of the Alto stands at 35 litres compared to 28 litres for the Kwid which means the Alto will go farther on a single tank of fuel compared to its French counterpart.

The ride on the Kwid is nothing short of great considering its price and size. The suspension has been well set up for the city and the car swallows up almost all undulations with minimal fuss.  The Alto on the other hand has a slightly stiffer setup which makes the ride not as pliant as the Kwid’s at slower speeds but is far more composed at higher speeds.

In the handling department, the Alto comes off much better than the Kwid because of the way it’s suspension is set up. Where the Kwid sports a softer setup, the Alto’s stiffer springs help keep the body roll in check. It’s no tarmac scorcher but a fun drive nonetheless. The steering is quite direct and shifting through the gears as you approach a bend is nothing short of a treat. It probably has the best driving dynamics in its segment and it shows. The brakes too are progressive, provide plenty of feel and stopping power. The brakes on the Kwid offer less bite overall and are not what you would call confidence inspiring (at high speeds) but do the job well in city traffic.

The Kwid is the quirkier looking of the two and it makes great use of the in-cabin space and also offers the best-in-class boot space and claims to be the most efficient car in its class. But the low refinement levels and the jerky nature of the engine work against it. Also, the driving experience isn’t as great as you would expect. The Alto on the other hand despite being less powerful is easier and yet much more engaging to drive and also offers great fuel economy along with a peace of mind ownership experience. In addition, the Alto is also cheaper with the VXi (O) variant that we have here being priced at Rs 3.34 lakh ex showroom Delhi compared to the Rs 3.71 Lakh asking price of the Kwid.

Then there is the brand value that Maruti Suzuki enjoys which also contributes to a better resale value and the fact that Maruti has one of the most extensive dealer networks in the country also helps the Alto’s case by a great degree. But, if we compare apples to apples and consider just the two cars as standalone products, the Kwid is by far the superior product and the winner in this comparison as it offers the single most important thing that a buyer from this segment looks for: Value For Money!